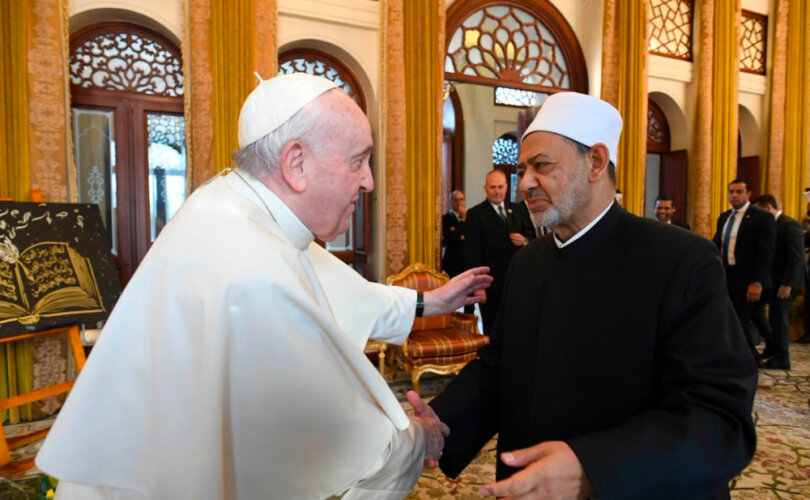 BAHRAIN (LifeSiteNews) – During the course of his short visit to the predominantly Muslim country of Bahrain, Pope Francis has promoted irreligious “fraternity,” echoing controversial writings described as “blasphemous” and dangerous to the Catholic faith.

On Friday, Pope Francis took part in a number of events as part of his Apostolic Journey to Bahrain, including the closing ceremony of the Bahrain Forum for Human Coexistence; a private meeting with the Grand Imam of Al-Azhar (now the pope’s regular supporter at such events); a meeting with the Muslim Council of Elders; and an Ecumenical Meeting for Peace.

At all of his public meetings, Pope Francis made repeated calls for “fraternity, dialogue, and peace,” adding to this a call for “unity in diversity.”

The 85-year-old Pontiff did not mention his belief in Jesus Christ during the interfaith addresses, speaking of the Savior only during a meeting with other Christians.

While the transcript of his numerous addresses contain limited quotations from Scripture – selectively used and truncated in order to promote the theme of “unity” – Francis’ various speeches chiefly drew from the 2019 Abu Dhabi document on Human Fraternity which he drew up with the Grand Imam, along with other ecumenical texts.

Repeatedly quoting from the Abu Dhabi document in his address at the Bahrain Forum, Francis depicted the document as the key to resolving “the stormy sea of conflicts.” He stated that the document called for more “prayer” which must be rooted in “religious freedom.”

“On the stormy sea of conflicts, let us keep before our eyes the ‘Document on Human Fraternity for World Peace and Living Together,’ which calls for a fruitful encounter between West and East.” #PopeFrancis Address, Closing of the #Bahrain Forum for Dialogue pic.twitter.com/XCM0HOxvpD

Francis echoed the theme of his September address at an ecumenical meeting in Kazakhstan – where he denounced “proselytism and indoctrination” – saying that “it is not enough to grant permits and recognize freedom of worship; it is necessary to achieve true freedom of religion.”

Not only every society, but also every creed is called to self-examination in this regard. It is called to question whether it coerces God’s creatures from without, or liberates them from within; whether it helps people to reject rigidity, narrow-mindedness and violence; whether it helps believers to grow in authentic freedom, which is not doing what we want, but directing ourselves to the good for which we were created.

He also re-iterated his calls for an end to the death penalty, speaking of the “right to life, of the need to guarantee that right always, including for those being punished, whose lives should not be taken.” As the Church, albeit in recent decades with stringent qualifications, has always upheld the legitimacy of the death penalty for murder, this is a rupture with Catholic doctrine.

READ:Swiss bishop condemns the Synod on Synodality as a ‘marketing campaign’ for heresy

— Article continues below Petition —
Join Bishops in calling out Pope Francis' statement for contradicting the faith
Show Petition Text
5974 have signed the petition.
Let's get to 6000!
Thank you for signing this petition!
Add your signature:
Show Petition Text

Calls for ‘future of fraternity’ at Muslim council

Following a private meeting with the Grand Imam, Francis addressed the assembled Muslim Council of Elders, praising them for seeing “in extremism a danger that corrodes genuine religion” and promoting “respect, tolerance and moderation.” “As-salamu alaikum (Peace be upon you)!” said the Pope in his greeting at the mosque of the Sakhir Royal Palace.

Francis referenced the inter-religious document he signed only weeks ago in Kazakhstan, which originally stated that “pluralism and differences in religion…are expressions of the wisdom of God’s will in creation.”

He warned the Muslim leaders that “social, international, economic and individual evils, as well as the dramatic environmental crisis of our time on which we have reflected here today, ultimately derive from estrangement from God and our neighbor.”

Here, the Pope also issued one of strongest calls for “fraternity” which he made during the weekend, confusingly urging his audience to place “openness to heaven ahead of differences of earth.”

I believe that increasingly we need to encounter one another, to get to know and to esteem one another, to put reality ahead of ideas and people ahead of opinions, openness to heaven ahead of differences on earth. We need to put a future of fraternity ahead of a past of antagonism, overcoming historical prejudices and misunderstandings in the name of the One who is the source of peace.

“We are called to proclaim with the wisdom of our elders and fathers, that God and neighbor come before all else, that transcendence and fraternity alone will save us,” he stated, addressing the Elders as “brothers in Abraham.”

Pope Francis notably avoided promoting a Catholic understanding of God as Trinity, instead employing language such as “One who loves humanity, the One whose name is peace” or “the Creator.”

Shortly after, Pope Francis took part in an ecumenical Christian prayer meeting held in the cathedral of Our Lady of Arabia, in Awali.

Here he told the ecumenical leaders, “By our divisions, we have wounded the Lord’s holy body, yet the Holy Spirit, who joins all the members together, is greater than our divisions according to the flesh.”

“Consequently it is right to say that what unites us far exceeds what divides us,” he continued, “and that, the more we journey according to the Spirit, the more we will be led to desire and, with the help of God, restore full unity among us.”

Francis referred to Pentecost, the day on which the Holy Spirit descended upon the Apostles who then preached and converted thousands to the Catholic faith. Here Francis focused on the event to praise “unity in diversity,” with a heavy emphasis on diversity.

“Let us remember, though, that the unity to which we are journeying is a unity in diversity,” he said.

When he then mentioned the Apostles’ preaching mission on Pentecost, Francis again avoided promoting the Catholic faith, and instead asked, “Are we truly people of peace?”

Pope Francis’ exhortations of a  “fraternity” and a “unity” divorced from the Catholic faith are controversial.

Pope Leo XIII condemned such arguments in his 1888 encyclical Libertas. Referring to the Church’s relationship with other religions, Leo wrote that the Catholic Church tolerates

certain modern liberties, not because she prefers them in themselves but because she judges it expedient to permit them, she would in happier times exercise her own liberty; and, by persuasion, exhortation, and entreaty would endeavor, as she is bound, to fulfill the duty assigned to her by God of providing for the eternal salvation of mankind.

Leo noted that “one thing, however, remains always true — that the liberty which is claimed for all to do all things is not, as We have often said, of itself desirable, inasmuch as it is contrary to reason that error and truth should have equal rights.”

While much of Francis’ Bahrain visit has been rooted in the Abu Dhabi document and the kind of “fraternity” promoted by his encyclical Fratelli tutti, both these texts are problematic for Catholics.

The Abu Dhabi text has been described as seeming to “overturn the doctrine of the Gospel” due to its promotion of equality of religions in a form of “fraternity.”

According to Church historian Roberto de Mattei, when “fraternity” is divorced from Christian charity, “far from constituting an element of cohesion in society,” it “becomes the source of its disintegration.” He argued that “if men, in the name of fraternity, are forced to live together without an end that gives meaning to their sense of belonging, the ‘ark’ becomes a prison.”

“Fratelli tutti” has also been similarly condemend by former Papal Nuncio to the U.S., Archbishop Carlo Maria Viganò, as promoting a “blasphemous” form of brotherhood without God as well as “religious indifferentism.”

Viganò added that “religious indifferentism, implicitly promoted in the text Fratelli tutti, which defines as ‘a good for our societies’ the presence of any religion – instead of ‘the liberty and exaltation of Holy Mother Church’ – denies in fact the sovereign rights of Jesus Christ, King and Lord of individuals, of the societies and of nations.”