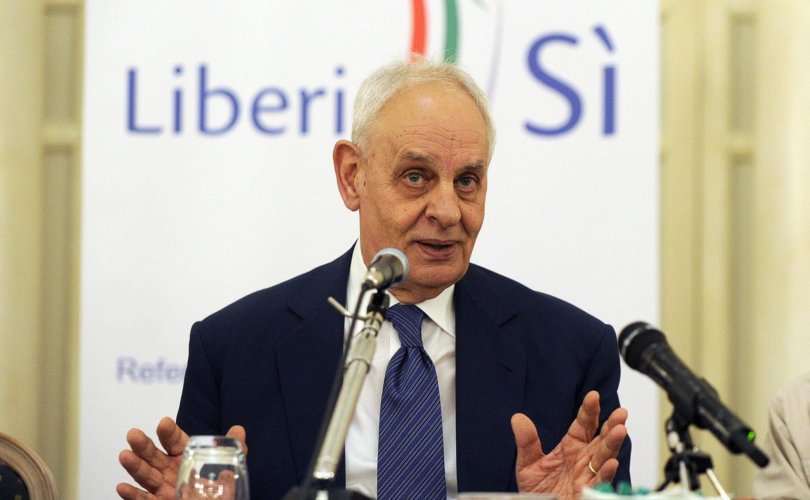 In a fiery interview published July 10 in Mattino di Napoli, Marcello Pera, who co-wrote the famous 2005 book Without Roots with then-Cardinal Joseph Ratzinger, said he cannot understand the Pope who, he said, goes beyond the bounds of “rational comprehension.”

A philosophy professor, member of Silvio Berlusconi’s Forza Italia party, and a former president of the Italian Senate, Pera said he believes the reason why the Pope calls for unlimited immigration is because he “hates the West” and is seeking to do all he can “to destroy it.”

He added that he does not like the Pope’s magisterium, saying it is “not the Gospel, only politics,” and that Francis is “little or not at all interested in Christianity as doctrine, in its theological aspect.”

“His statements appear to be based on Scripture,” he said, but “actually they are strongly secularist.”

Immigration has become a highly sensitive topic in Italy in recent months as thousands of refugees arrive every month, mostly from north Africa, placing considerable strain on local communities and services.

Pera's comments also come after another conversation between the Pope and the atheist Eugenio Scalfari in which Francis allegedly told Scalfari to be “very concerned” about the summit last week of the G20 group of industrialized nations because they have “very dangerous alliances” and a “distorted view of the world.”

According to Scalfari, who is over 90 and doesn’t record his interviews, the Pope also said the G20 worried him because of the issue of immigration, saying the problem is “unfortunately rising in today's world, that of the poor, the weak, the excluded, of which migrants are part.”  Some of the G20 nations have “few local poor but fear the invasion of immigrants,” he said.

In the July 10 interview Pera, went on to say that he believes the Pope isn’t concerned about the salvation of souls but only social well-being and welfare, and argued that if Europe were to follow the Pope’s position, it would be committing suicide. “The Pope reflects all the prejudices of South America against North America, against the free market, liberty, and capitalism,” Pera added.

On the issue of migration, the philosopher politician believes the Pope’s approach is not from the Gospel, and his words are designed to win easy applause from the United Nations.  His political vision on migrants and society, he continued, has “nothing to do with the Western tradition of political freedom and its Christian roots.”

Pera’s book with Cardinal Ratzinger, whose full title was Without Roots —The West, Relativism, Christianity, Islam, warned of the dangers facing civilization if the West abandoned its moral and cultural history. The joint authors called on Western leaders to embrace a spiritual rather than political renewal, accepting the moral values of its Judeo-Christian heritage which would enable society to make sense of today’s economic, political and social challenges.

In this week's interview, Pera said he believes the open doors approach to migrants that the Pope is advancing will lead to a “bad reaction” with no desirable solution. He said the Pope’s positions underline that he is not in “perfect harmony” with “conservative Catholics and the rest of the Church.”

He added that Francis is not only causing problems in politics over migration, he is also fueling a kind of schism within the Church.

Pera, whose 2008 book Why We Must Call Ourselves Christians contained a preface by Pope Benedict XVI, maintained that an “apparent hidden schism exists in the Catholic world” that the Pope is “pursuing with obstinate persistence and determination.”

But he said this “new course” being pursued by Francis does not convince him at all, and argued that it is “exploding the Second Vatican Council in all its revolutionary radicality.”

Pera further believes these ideas, which he thinks are devastating for the Church, have their origins in the Council. “That aggiornamento (updating) of Christianity secularized the Church, triggering a very profound change, even if it risked bringing a schism that was kept at bay in the years that followed,” he said.

He credited Benedict XVI and Pope St. John Paul II for saving the Church, “resisting and trying to mediate the new with tradition.” They did this in a “lofty way,” he said, but now Francis has brought all back into discussion: “human rights, all without exception, have become the ideal point of reference and compass for the Church” while the “rights of God and of tradition have almost gone.”

In an interview with the National Catholic Register in 2006, Pera warned against multiculturalism, saying it leads to the exact “opposite of integration, because it gives rise to separate communities, that are then reduced to a ghetto-like status and enter into conflict amongst themselves.”

He also said then that his diagnosis for Europe’s future was “not a happy one.”

“If Europe goes forward with its relativist culture, with the refusal of its own tradition, with its low nativity rates, with indiscriminate immigration, then Europe is going to end up Islamized,” he warned.

Referring to Benedict XVI’s comments in Without Roots, he said “the impression today is that Europe resembles the Roman Empire at its fall.”