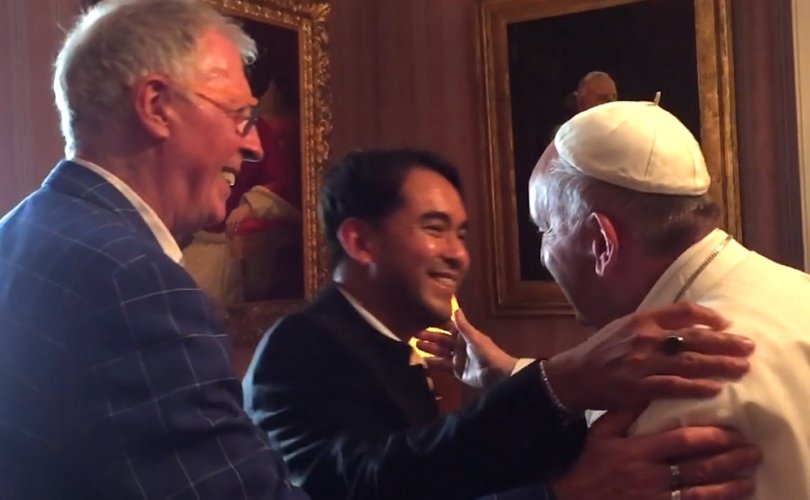 In a new book-length interview, the Pope reiterates his strong opposition to same-sex “marriage,” but recommends using the term “civil unions” instead.

“Let us call things by their names. Matrimony is between a man and a woman. This is the precise term. Let us call the same-sex union a ‘civil union,’” he said.

Pope Francis made the comment during more than a dozen conversations with French journalist Dominique Wolton, who published the Pope’s words in a 432-page book titled Politics and Society. It was published in French on Wednesday.

The Vatican's Congregation for the Doctrine of the Faith reiterated this teaching in a key document in 2003. It was authored by then-prefect Cardinal Joseph Ratzinger (who would be elected Pope Benedict XVI in 2005) and approved by Pope Saint John Paul II.

“The Church teaches that respect for homosexual persons cannot lead in any way to approval of homosexual behaviour or to legal recognition of homosexual unions,” it reads.

It is widely known that when he was archbishop of Buenos Aires, Pope Francis (then Cardinal Jorge Bergoglio) was publicly critical of the government’s push to legalize homosexual “marriage,” but privately signaled he would be willing to live with civil unions as a compromise measure.

The Pope’s authorized biographer, Sergio Rubin, wrote concerning this that Bergoglio argued privately that the Church should come out for civil unions as the “lesser of two evils.”

“He wagered on a position of greater dialogue with society,” stated Rubin. This claim has been backed by homosexual activist Marcelo Marquez, who told the New York Times in 2013 that Bergoglio “told me that homosexuals need to have recognized rights and that he supported civil unions, but not same-sex marriage.”

In a 2014 interview with Italian daily Corriere della Sera, Pope Francis sympathized with countries that legalize same-sex civil unions, stating that they do so “to regularize different situations of living together,” mentioning the need to regularize the economic aspects between same-sex partners, such as, for example, to ensure health care.

When asked in February 2016 aboard the papal plane to comment on the Italian Parliament’s push to legalize same-sex civil unions, Pope Francis replied that he “can’t insert himself in the specific internal politics of a country.” He then added: “And what I think is what the Church thinks and has said so often.”

In the same press conference, the Pope criticized then-presidential candidate Donald Trump for his plan to build a wall between Mexico and the U.S. to stop illegal immigration.

It’s true that behind all this we find gender ideology. In books, kids learn that it’s possible to change one’s sex. Could gender, to be a woman or to be a man, be an option and not a fact of nature? This leads to this error.

Let us call things by their names. Matrimony is between a man and a woman. This is the precise term. Let us call the same-sex union a “civil union.”