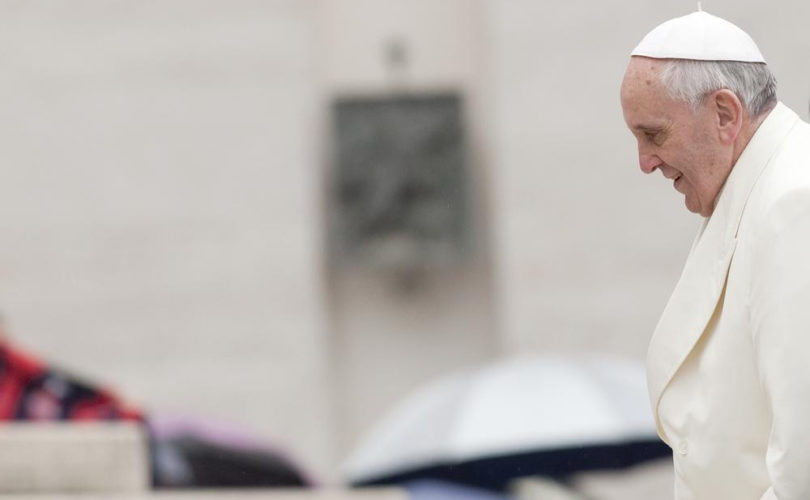 ROME, January 20, 2016 (LifeSiteNews) – As if readying the Church for a coming change, Pope Francis has significantly raised the stakes for those apprehensive about the possibility that he has new innovations in store for the Church. A Vatican Radio summary of his homily on January 18 reads: “Christians who say ‘it’s always been done that way,’ and stop there have hearts closed to the surprises of the Holy Spirit. They are idolaters and rebels who will never arrive at the fullness of the truth.”

The pope did not specify to what particular changes in the Church he was referring. However, there is much speculation with his post-Synodal Apostolic Exhortation anticipated within months. In it he is expected to decide on the question of Communion for divorced and remarried Catholics, and on the proposal to give bishops conferences doctrinal authority. Some observers also think the pope may address the question of homosexuality and language, in particular the supposed need to put less emphasis on the sinfulness of the sexual behavior and more on the notion of non-discrimination and the acceptance of persons with homosexual inclinations.

Even though several cardinals have said openly that such changes are not possible within the Church and would run counter to the faith, Pope Francis has knowingly left the discussion open on these matters – so much so that Catholics, even those closely following the situation, do not know which way the exhortation will decide on them or if it will leave them intentionally ambiguous.

With reference to such changes, Pope Francis has consistently repeated the Catholic maxim that doctrine will not change but discipline could. But various cardinals have pointed out that many of the changes that are in question, such as those outlined above, have doctrinal effect and are not merely changes in pastoral practice.

In his homily yesterday, the pope employed some of the same language he used at the close of the Synod when comparing modern changes in the Church to changes during biblical times.  In both, he spoke of not changing laws, but recognizing that laws are at the service of man, not vice versa. The pope cited Christ’s defense of the apostles gathering corn on the Sabbath, wherein Our Lord compared their action to David eating the temple’s show bread even though it was reserved for the priests. “The sabbath was made for man, not man for the sabbath,” Christ said.

If applied to the various controverted questions of the Synod, this would be a misuse of the passage, for Christ was speaking about laws that were indeed disciplinary and changeable, and thus could be contravened morally. But the Synod questions are of a moral nature, and to contravene the moral law is never permissible. Hence, the serious confusion over what Pope Francis is really saying.

The negative precepts of the natural law are universally valid. They oblige each and every individual, always and in every circumstance. It is a matter of prohibitions which forbid a given action semper et pro semper, without exception, because the choice of this kind of behaviour is in no case compatible with the goodness of the will of the acting person, with his vocation to life with God and to communion with his neighbour. It is prohibited — to everyone and in every case — to violate these precepts. They oblige everyone, regardless of the cost, never to offend in anyone, beginning with oneself, the personal dignity common to all.

The Church has always taught that one may never choose kinds of behaviour prohibited by the moral commandments expressed in negative form in the Old and New Testaments. As we have seen, Jesus himself reaffirms that these prohibitions allow no exceptions: “If you wish to enter into life, keep the commandments… You shall not murder, You shall not commit adultery, You shall not steal, You shall not bear false witness” (Mt 19:17-18).

And in paragraph 104, John Paul the Great wrote,

… appropriate allowance is made both for God’s mercy towards the sinner who converts and for the understanding of human weakness. Such understanding never means compromising and falsifying the standard of good and evil in order to adapt it to particular circumstances. It is quite human for the sinner to acknowledge his weakness and to ask mercy for his failings; what is unacceptable is the attitude of one who makes his own weakness the criterion of the truth about the good, so that he can feel self-justified, without even the need to have recourse to God and his mercy. An attitude of this sort corrupts the morality of society as a whole, since it encourages doubt about the objectivity of the moral law in general and a rejection of the absoluteness of moral prohibitions regarding specific human acts, and it ends up by confusing all judgments about values.

In his homily yesterday, Pope Francis used harsh language against those unwilling to accept yet unspecified “change.” “It is the sin of so many Christians who cling to what has always been done and who do not allow others to change. And they end up with half a life, [a life that is] patched, mended, meaningless,” he said. The sin, he said, “is a closed heart,” that “does not hear the voice of the Lord, that is not open to the newness of the Lord, to the Spirit that always surprises us.”

Christians who obstinately maintain ‘it’s always been done this way,' this is the path, this is the street—they sin: the sin of divination. It’s as if they went about by guessing: ‘What has been said and what doesn’t change is what’s important; what I hear—from myself and my closed heart—more than the Word of the Lord.’ Obstinacy is also the sin of idolatry: the Christian who is obstinate sins! The sin of idolatry. ‘And what is the way, Father?’ Open the heart to the Holy Spirit, discern what is the will of God.

What changes Pope Francis has in mind for the Church remain to be seen. However, Catholics feeling the sting of the pope’s harsh language can consider themselves in good company.  Some Synod Fathers who battled to defend the Church’s moral teachings on divorce, homosexuality, and papal authority felt themselves chastised by the pope during his final address to the Synod, when he said: “true defenders of doctrine are not those who uphold its letter, but its spirit; not ideas but people; not formulae but the gratuitousness of God’s love and forgiveness.”  The pope said there was a need to overcome “the recurring temptations of the elder brother (cf. Lk 15:25-32) and the jealous labourers (cf. Mt 20:1-16)” and that “the Church’s first duty is not to hand down condemnations or anathemas, but to proclaim God’s mercy…”

To some, it seems that the Holy Father is condemning the fidelity emphasized by John Paul II, and because he does not specify differently, many will take it as the most plausible interpretation. The National Catholic Reporter’s Michael Sean Winters, for one, called it “another amazing sermon that is probably setting the groundwork for an Apostolic Exhortation that will knock everyone’s socks off.”