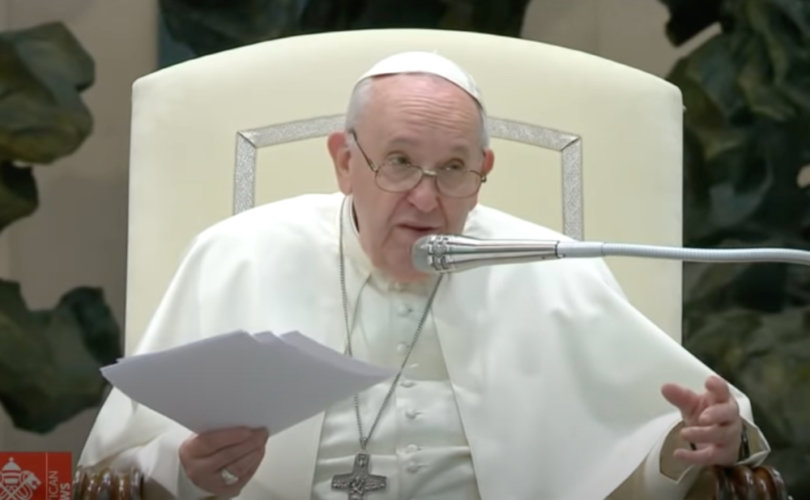 VATICAN CITY (LifeSiteNews) — Pope Francis has published his long awaited document reforming the Roman Curia, allowing any member of the laity to lead a Curial departments, which have all been renamed and now deemed to be of “equal” value.

With a complete absence of fanfare or warning, the Holy See Press Office published Pope Francis’ apostolic constitution Praedicate evangelium (Preach the Gospel) March 19. At the same time, the Vatican announced the press conference, scheduled for March 21, to present and explain the new regulations, which will be led by Cardinal Marcello Semeraro, the Prefect of the Congregation for the Causes of Saints; Bishop Marco Mellino, Secretary of the Council of Cardinals; and Jesuit Father Gianfranco Ghirlanda, canonist and emeritus professor at the Pontifical Gregorian University.

Comprising of 250 articles, Praedicate evangelium will come into effect on Pentecost Sunday, June 5, 2022. It is the result of the 2013 pre-conclave meetings and the subsequent meetings of Pope Francis’ Council of Cardinals, along “with various contributions from the local Churches around the world.”

The text is presented only in Italian. The previous Curial reforms from 1988, Pope John Paul II’s Pastor bonus, are now “fully abrogated and replaced.”

“This new Apostolic Constitution aims to better harmonize today’s exercise of service of the Curia with the path of evangelization, which the Church, especially in this season, is experiencing,” the text reads.

The slimmed down number of such Dicasteries now includes:

These Dicasteries are afforded no hierarchy, at least officially, as Praedicate evangelium states: “[T]he Roman Curia is composed of the Secretariat of State, the Dicasteries and the Offices, all of which are legally equal.”

Nine years in the making, Pope Francis most significant act as Supreme Pontiff, the complete overhaul and reform of the Roman Curia with the Apostolic Constitution Praedicate Evangelium which has been published today, coming into force on Pentecost Sunday. https://t.co/aYM5vD65XC

However, it is the Secretariat of State, currently led by Cardinal Pietro Parolin, which appears to assume the highest rank under Praedicate evangelium, as the text states the Secretariat “closely assists the Roman Pontiff in the exercise of his supreme mission.” Reports suggest that early drafts of the document were more liberal in the powers which they granted to the Secretariat.

Among the duties of the Secretariat, divided into three sections, is the “handling of affairs concerning the daily service” of the Pontiff, along with overseeing the coordinations of the various Dicasteries. The Secretariat is also to draw up all of the papal texts, and oversee the publication of the official bulletin for the Pope and the Holy See.

Elevated role of the laity in the Church’s governance

A key change is the elevation of the role of the laity in the governance of the Vatican Curia, and by extension, in the wider Church. “The Pope, the Bishops and other ordained ministers are not the only evangelizers in the Church,” reads the text. Therefore, the laity — male or female — must have “roles of government and responsibility,” orders Pope Francis.

Praedicate evangelium thus decrees that “any member of the faithful can preside over a Dicastery or an Organism, given the particular competence, power of governance and function of the latter.”

Such lay leaders for the Curia will be chosen insofar as they are “distinguished by spiritual life, good pastoral experience, sobriety of life and love for the poor, spirit of communion and service, competence in the matters entrusted to them, ability to discern the signs of the times.”

Resurgence of the ‘extraordinary form’

A peculiar development of PE is the resurgence of the term “extraordinary form” in Article 93 to designate the Traditional Latin Mass, despite Pope Francis’ July 2021 motu proprio Traditionis Custodes which stated that the liturgy of Paul VI, or the Novus Ordo, is the “unique expression of the lex orandi of the Roman Rite.”

Under the purview of the newly named Dicastery for Divine Worship and the Discipline of the Sacraments is the task to deal “with the regulation and discipline of the sacred liturgy as regards the extraordinary form of the Roman Rite.”

The new constitution took Vatican journalists by surprise, given its unannounced arrival. Reuters described the document as “revolutionary,” although others, while not denying its contents represented a stark change, were not surprised by the document.

People are asking if there is anything surprising in Praedicate Evangelium. The short answer is no, absolutely nothing.