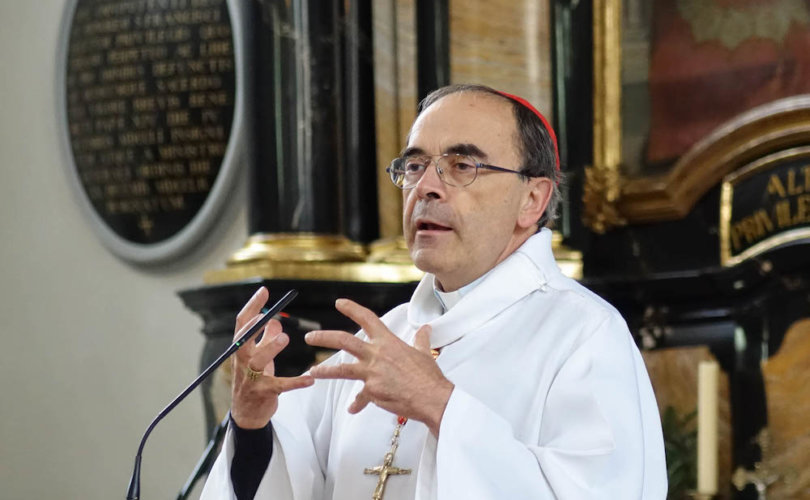 LYON, France, March 19, 2019 (LifeSiteNews) – Pope Francis has refused to accept the resignation of a French cardinal who was convicted of covering up sex abuse despite it happening two decades before he first learned of it. The Cardinal maintains his innocence.

Cardinal Philippe Barbarin, the Archbishop of Lyon, visited Francis in Rome yesterday to tender his resignation in person. On March 7, a French court found him guilty of failing to report the abuse, even though it had occurred many years before Barbarin first learned of it.

In a short statement released today, Barbarin said:  “Monday morning, I put my mission into the Holy Father’s hands.  Invoking the assumption of innocence, he didn’t want to accept the resignation.”

“He left me the freedom to make the decision that seems best to me for the life of the Diocese of Lyon, today,” Barbarin continued.

“At his suggestion and because the Church of Lyon has suffered for 3 years, I have decided to step back for awhile and leave the governance of the diocese to the Vicar General Moderator, Father Yves Baumgarten.”

“This decision takes effect as of today.”

“I can confirm that the Holy Father has not accepted the resignation presented by Cardinal Philippe Barbarin, Archbishop of Lyon,” he said.

He concurred that the Holy Father had left the Cardinal free to make a decision regarding his diocese and that Barbarin had asked Fr. Baumgarten to take charge temporarily.

This was Barbarin’s second attempt to resign his ministry as Archbishop of Lyon. He first tendered his resignation in 2016, months after the case of Fr. Bernard Preynat, a priest of the diocese of Lyons accused of having sexually abused nine boys, had become public. The abuse had taken place in 1991, 25 year years before, but Barbarin was charged with covering up Preynat’s crimes.

Pope Francis had refused Barbarin’s resignation, saying in an interview with the unofficial daily of the French episcopate, La Croix, that to otherwise “would not make sense” and constitute an “imprudence.”

“We shall see when the trial is over. But now, it would mean acknowledging guilt,” he explained.

Barbarin received a six-month suspended prison sentence for failing to report between 2014 and 2015 “ill-treatment, deprivation or sexual abuse” regarding a minor under 15. The criminal court of Lyons discharged five other defendants, all collaborators or former collaborators of the diocese, of any wrongdoing in the case.

Barbarin’s legal team has already indicated that they will launch an appeal, and the Cardinal himself continues to maintain his innocence.

The correctional court of Lyons decided: “Even though his functions gave him access to every information and though he had the capacity to analyze them and to report them usefully, Philippe Barbarin decided in conscience, in order to preserve the institution to which he belongs, not to communicate them to the judiciary.”

Upon hearing the judgment, Barbarin released a statement saying that he would attempt to resign.

“I take due note of the tribunal’s decision. Irrespective of my personal fate, I reiterate my compassion for the victims and their families. I have decided to go and see the Holy Father to tender my resignation. He will see me in a few days. Thank you,” he said.