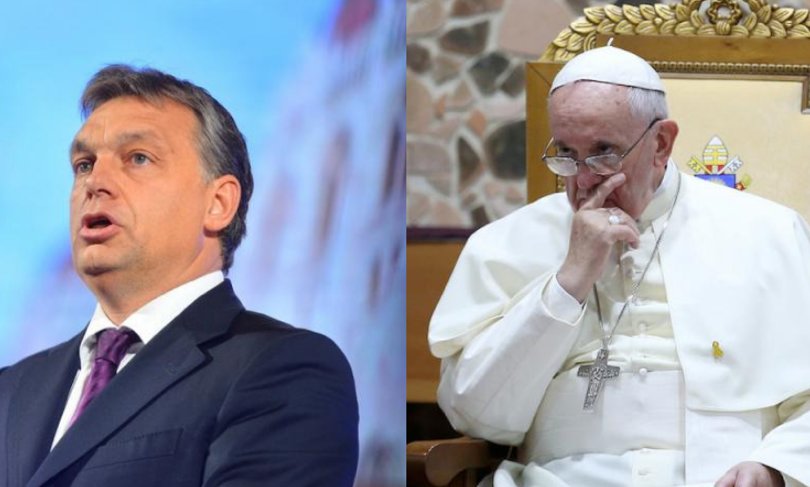 September 26, 2018 (LifeSiteNews) – Pope Francis refused to take questions from reporters on the papal plane Tuesday about the abuse crisis rocking the Church along with his papacy.

Reporters were told by papal spokesman Greg Burke that they must restrict their questions to the Pope’s trip.

After answering a few questions about his trip to the Baltic States from local journalists representing the nations visited, the pope who champions “dialogue” launched into a “40-minute monologue, effectively crowding out questions on the thorny issue of how he had dealt with the McCarrick case,” Breitbart’s Thomas Williams reports.

The pope put off a question from an Austrian reporter about a new report on sexual abuse and the Church’s handling of it in Germany – for which the journalist referenced the pope’s comments on sex abuse made on the trip during an ecumenical event in Tallinn, Estonia.

“About this, I’ll speak after [I speak about] the trip,” Pope Francis said. “I will respond, but first questions about the trip. This is the rule. But, it will be the first question after the trip.”

He did not, however, return to the question on the German report.

The Pope refused to take questions from English reporters.

“In fact, none of the English-speaking journalists were allowed to ask questions,” Vatican journalist Marco Tosatti reported, adding that these were the ones “who would have been most determined to ask for explanations on these burning issues” of the abuse crisis.

Rome Bureau Chief for the US Bishops’ Catholic News Service (CNS) Cindy Wooden gave further testament to this, tweeting that she was, “Shot down by #PopeFrancis.”

“He wanted questions only about the Baltics trip,” Wooden continued. “I said I had questions he left unanswered on the way back from Dublin. They were trip questions. Just not this trip. #FoiledAgain #Vigano.”

After the pope’s response to the Austrian journalist, there was discussion on whether to take further questions on the trip, according to Catholic News Agency’s (CNA) unofficial transcript of the in-flight press conference.

“People expect information about this trip,” Francis then stated. “After, other questions.”

When Burke announced that questions from the trip had concluded, instead of opening the briefing up to other questions, the Pope took the floor and stated, “I would like to tell you some things on some points of the trip that I have experienced with a special strength.”

Journalists from Italy and the U.S. were especially ready “to return to issues dodged by the pope in the last such press conference,” Williams wrote, when Francis had been asked precisely when he’d learned of McCarrick’s history of homosexual abuse.

“They also intended to ask why the pope had not yet launched a full-scale investigation into the McCarrick case,” said Williams, “which the U.S. bishops’ conference had explicitly requested.”

Tosatti reported similarly about the press conference, his piece translated by a reader and a portion republished by Rod Dreher at The American Conservative:

It was an “armored” press conference held by the Pope [on Tuesday, September 26] on the flight which took him back to Rome after his trip to the Baltic Republics. The Pope – who according to several correspondents on the plane appeared nervous and in difficulty – did not wish to respond to any questions which were not on the topic of the journey he had just finished. Meaning there were no questions allowed on the McCarrick case, on the testimony of Archbishop Viganò, or on the case of Cardinal Murphy O’Connor.

When first asked about it August 26 on the papal plane on his return from Ireland and the World Meeting of Families, the Pope said, “Read the statement carefully yourselves and make your own judgment. I am not going to say a word about this.”

In the last month during his Mass homilies, Pope Francis has aligned people who criticize or accuse bishops in the sex abuse scandal with Satan. Several times he has cryptically alluded to such individuals as the Great Accuser, another scriptural reference for the devil.

While talking about the Baltic trip during the presser on the papal plane Tuesday, the Pope referenced Viganò, though not by name, saying that he had the support of the world’s bishops in the matter.

“When there was that famous communiqué of an ex-Apostolic Nuncio, the episcopates of the world wrote me, saying clearly that they felt close, that they were praying for me,” said Francis.

Close to 40 bishops or cardinals in the U.S. and beyond have expressed some form of support for Viganò, his character and/or his testimony and the need for it to be thoroughly investigated. Others have called for an investigation as well. A LifeSiteNews petition of lay support for Viganò had more than 16,000 signatures at press time.

The United States Conference of Catholic Bishops announced plans last week to proceed in investigating McCarrick and the associated cover-up and also to augment policy dealing with bishops who either abuse or cover for abusers.

The announcement followed the apparent rejection by Pope Francis of the U.S. Bishops’ request for an apostolic visitation to the U.S. to address the McCarrick allegations and the role bishops have played in the wider abuse scandal.