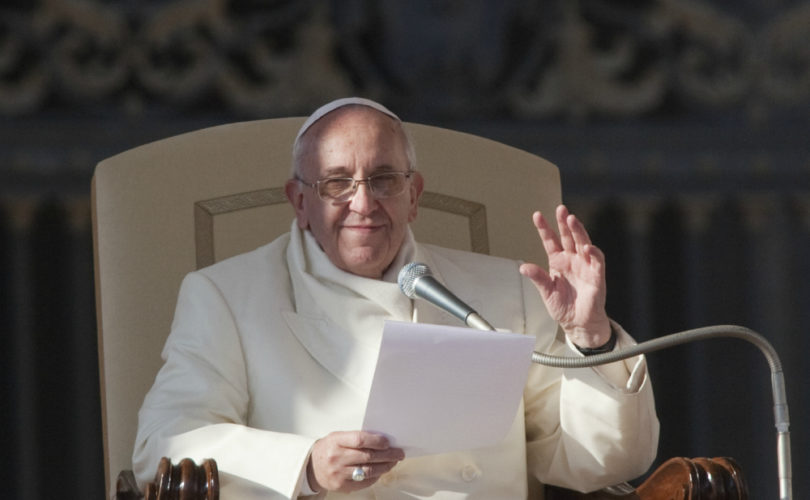 September 28, 2015 (LifeSiteNews) — Pope Francis gave clear approval of Kim Davis’ stance against issuing homosexual “marriage” licenses as he traveled back to Rome Monday, calling it a “human right” for government officials to refuse to conduct a duty that violates their conscience.

On the flight home from his first visit to the U.S., the pope was asked whether he supported individuals, including government officials, who decline to obey certain laws, for instance issuing “marriage” licenses to same-sex couples.

“Conscientious objection must enter into every juridical structure because it is a right,” the Holy Father said in response.

Religious liberty has been a hot-button issue in recent months in the United States as various small businesses across the country have been targeted with fines, prosecution and attack on social media for declining to take part in homosexual “weddings” based upon their owners’ religious and moral objection.

The headlines of late have been focused on the case of Rowan County, KY Clerk Kim Davis, who went to jail for refusing to issue marriage licenses to any couples so as to avoid discriminating against homosexual couples. She has asked for an accommodation where her name and title would be removed from the licenses.

“And if someone does not allow others to be a conscientious objector,” the Holy Father said, “he denies a right.”

The pope also said conscientious objection must be respected in legal structures.

“Otherwise we would end up in a situation where we select what is a right, saying: 'This right has merit, this one does not,'” he stated.

The unambiguous comments from Pope Francis in support of religious freedom come after other comparable statements he made, spoken and symbolic, throughout his historic visit to the United States, making religious liberty a recurring theme for the trip.

The pope first addressed religious liberty early in the visit during the White House welcome ceremony, where he expressed concern over the current increasingly hostile climate toward religious freedom in the U.S.

“Mr. President, together with their fellow citizens, American Catholics are committed to building a society which is truly tolerant and inclusive, to safeguarding the rights of individuals and communities, and to rejecting every form of unjust discrimination,” he said. “With countless other people of good will, they are likewise concerned that efforts to build a just and wisely ordered society respect their deepest concerns and the right to religious liberty.”

The Holy Father also spoke of the importance for U.S. citizens to remain vigilant and defend religious freedom, commending the U.S. Bishops for their efforts to that end.

“That freedom reminds one of America’s most precious possessions,” Pope Francis stated from the White House south lawn. “And, as my brothers, the United States Bishops, have reminded us, all are called to be vigilant, precisely as good citizens, to preserve and defend that freedom from everything that would threaten or compromise it.”

President Obama, whose administration is not known as religious liberty–friendly, from its push to penalize small business owners who employ conscientious objection to homosexual “marriage,” and for forcing employers to pay for birth control and abortifacients via its HHS Contraception Mandate, was ready for the Holy Father to address the subject.

Heading Pope Francis’ message off first during the ceremony with his own remarks, Obama gave the idea that he supports religious freedom, telling the pope that his presence gave a reminder that people are only truly free if they can practice their faith freely, and that religious liberty is cherished in the United States.

The president said to the pontiff, “We stand with you in defense of religious freedom and interfaith dialogue, knowing that people everywhere must be able to live out their faith free from fear and free from intimidation.”

Pope Francis followed up later that day by making an unscheduled stop to visit the Little Sisters of the Poor, an international religious community of nuns that operate group homes and provide daily care for the elderly poor in 30 U.S. cities. currently targeted by the Obama Administration for refusing to compromise their Catholic values by complying with the HHS Contraception Mandate.