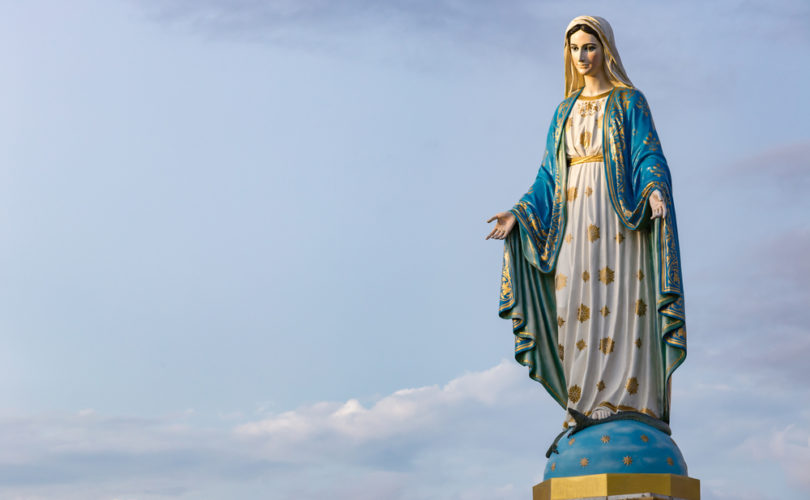 VATICAN CITY, March 25, 2021 (LifeSiteNews) — Pope Francis has launched yet another attack on Our Lady, as he used his weekly general audience to undermine Catholic teaching on her Divine Motherhood, as well as the understanding of her role as Co-Redemptrix, suggesting that such a title was the fruit of exaggerations.

On Wednesday morning, as the Pope addressed the handful of clergy seated around him, as well as those watching via video link, delivered an address containing a mixture of both Catholic and non-Catholic teaching.

The Church’s understanding of Marian co-redemption has been consistent since the days of the early Fathers — right up until recent times, when it became a controversial topic following the Second Vatican Council, due concerns from left-leaning clergy about its effect upon ecumenism.

“Mary points out the mediator,” Francis continued, “Mary is completely directed towards Him, she is more His disciple than His mother, we could say.”

This point could be read to contradict Church teaching, which has traditionally held that all the titles and honors proper to Mary, stem from her role as Mother of God, as taught in the Council of Ephesus in 431.

Seeming to comment off-script, the Pope specified his attack, saying that Christ did not intend for Mary to be Co-Redemptrix. “The mother who covers everyone under her mantle as a mother, Jesus entrusted us to her as a mother, not as a goddess, not as a co-redemptrix, as a mother.”

The Pope went so far as to suggest that such a title, by which numerous saints and popes have addressed Mary, was born out of loving exaggeration, but was not factually true. “It’s true, Christian piety likes to give beautiful titles to her, but above all she is a mother, what a wonderful title that is. But remember, all the wonderful titles that the Church gives to Mary, they don’t take anything away from the unique mediating role of Jesus. Sometimes when we love someone it makes us exaggerate.”

With Francis casually dismissing devotion to Mary as Co-Redemptrix as an exaggeration, he seemed to reject the perennial teaching of the Church on this topic — albeit not a dogma declared ex cathedra. Indeed, U.K. Catholic commentator Deacon Nick Donnelly noted that Pope Francis was “waging a campaign against Catholic Marian doctrine.”

In comments to LifeSiteNews, Deacon Donnelly pointed to a deliberate ignoring of Scripture on the part of the Pope: “By restricting the titles of the Blessed Virgin Mary to only ‘Mother’ and ‘disciple,’ Pope Francis ignores the Protoevangelium’s and Simeon’s prophecy that she would play an essential role in the redemption of mankind. The title Co-Redemptrix safeguards divine revelation about the role of Mary.”

Drawing heavily from Scripture, figures such as Saints Irenaeus, Ephraim, Jerome, and Augustine laid the foundations for the understanding of the term in the first centuries of the Church, before later theologians such as Saints Bernard, Bonaventure, Thomas Aquinas, Louis de Montfort and Alphonsus Liguori fully expounded the mysteries contained in the title.

In addition to numerous other non-canonized scholars, the Holy Office has also weighed in on the issue, writing in 1908 in response to a query about the feast of the Seven Sorrows of Mary that “the devotion of the Sorrowful Mother may increase and the piety of the faithful and their gratitude toward the merciful Co-Redemptrix of the human race may intensify.”

Five years later, the Holy Office granted a partial indulgence to a prayer addressing Mary as “Co-Redemptrix of the human race.”

Pope Pius XI also used the term Co-Redemptrix as part of his public addresses, in 1933, 1934 and 1935, building on the previous papal support for the teaching as expressed by Popes Pius IX, Leo XIII, Pius X, and Benedict XV.

Pope John Paul II also used the term at least seven times during his pontificate, both in his writings and addresses, as well as teaching the meaning of the title in his encyclical Redemptoris Mater and in his General Audience’s between 1995 and 1997.

So in-depth and constant is the teaching of the Church on this topic, that in 2017 the International Marian Association released a statement as part of a longer appeal to Pope Francis, saying: “Not only is the Co-redemptrix term theologically acceptable in articulating the intimacy and complementarity between the divine Redeemer and his immaculate human mother, but the title is actually necessary to properly denote and signify in a single term the providentially designed unity between Jesus and Mary, God-man and human woman, New Adam and New Eve, Redeemer and Co-redemptrix, in the historic work of Redemption.”

However, the latest general audience is by no means the first time the current Pope has attacked Marian co-redemption. On December 12, 2019, Francis proclaimed that moves to officially declare Mary Co-Redemptrix, were “foolishness.”

In response, Archbishop Carlo Maria Viganò sternly rebuked Francis, saying that “Pope Bergoglio once again gave vent to his evident Marian intolerance, recalling that of the Serpent in the account of the Fall, in that Proto-Gospel which prophesizes the radical enmity placed by God between the Woman and the Serpent, and the declared hostility of the latter, who until the consummation of time will seek to undermine the Woman’s heel and to triumph over her and her posterity.”