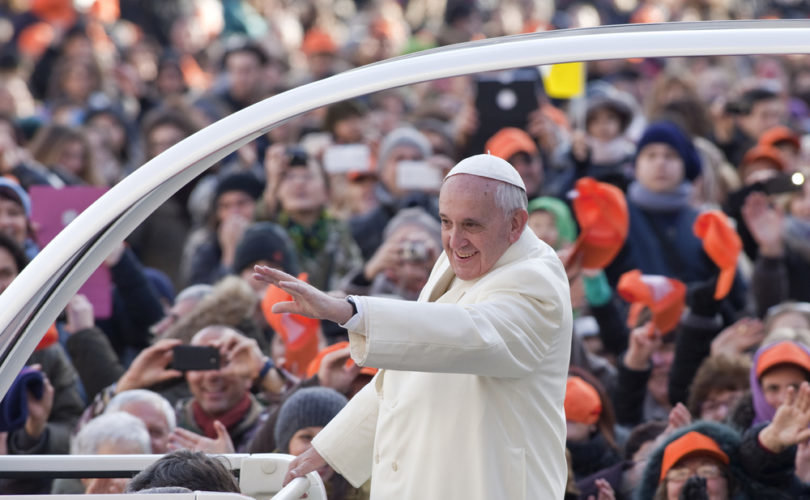 In the traditional papal Urbi et Orbi (to the city and the world) address on Christmas Day, Pope Francis went off script to mention “infants killed in the womb.”  A few days later, he received in audience an association of large families, addressing the families as models for all of society.

“My thoughts turn to all those children today who are killed and ill-treated, be they infants killed in the womb, deprived of that generous love of their parents and then buried in the egoism of a culture that does not love life; be they children displaced due to war and persecution, abused and taken advantage of before our very eyes and our complicit silence,” said the pope at noon on December 25.

“I think also of those infants massacred in bomb attacks, also those where the Son of God was born,” he added.  “Even today, their impotent silence cries out under the sword of so many Herods. On their blood stands the shadow of contemporary Herods.”

Priests for Life leader Fr. Frank Pavone noted the omission of the portion of the address regarding abortion in the translator’s version, and wondered what was going on at the Vatican. “Now the broadcast of this involves a feed that comes from the Vatican, whereby you hear the Pope speaking in Italian, and then you hear a translator, who has the text in front of him, saying it in English,” related Fr. Pavone. “Interestingly, when it came to this particular paragraph, the translators skipped the words about the babies in the womb and about the modern day Herods and about the generous love of parents and the culture that does not love life.”

On December 28 Pope Francis spoke to a delegation of families with large numbers of children, telling them that “in a world often marred by selfishness, a large family is a role model for solidarity and sharing and this benefits the whole of society.” Nearly 7,000 members of the Italian Association for Large Families were encouraged to hear the pope say it was clear that they “love the family and love life.”

Francis spoke of how each of their numerous children is “wanted by God” and of the miracle of their being. The pope called on governments to provide more support for large families, which he said is often lacking.