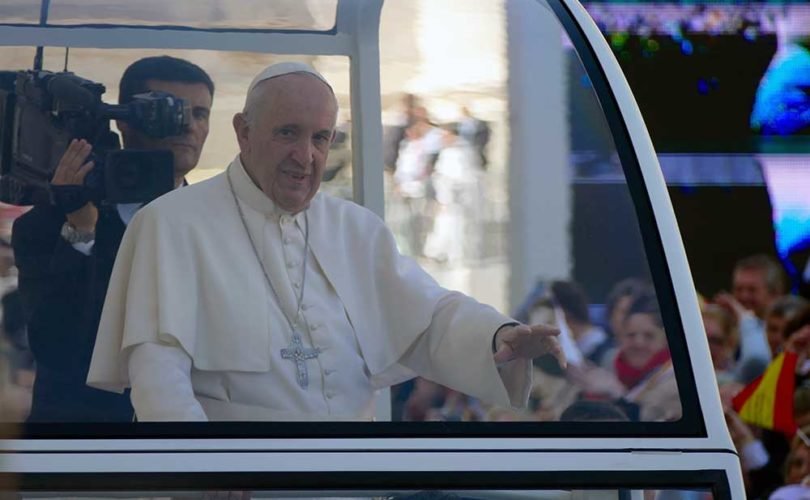 VATICAN CITY, September 16, 2019 (LifeSiteNews) ― Pope Francis repeated his opposition to life sentences for criminals — such as serial killers, child-abusers, and repeat sex offenders — in an address to prison workers on Saturday morning.

The pontiff addressed Italian prison guards and staff in Saint Peter’s Square during an audience on September 14, commending them for their work. In his speech, he also addressed prisoners, cajoling them not to “suffocate the flame of hope.” By this Pope Francis meant they should not lose hope of being reconciled with, and reintegrated into, society at large.

Francis then suggested that it is everyone’s duty to keep this hope for corporal freedom alive and stated that life imprisonment is “a problem to be solved”:

Dear brothers and sisters, to revive this flame [of hope] is the duty of all. It is up to every society to feed it, to ensure that punishment does not compromise the right to hope, that prospects of reconciliation and reintegration are guaranteed. While remedying the mistakes of the past, we cannot erase hope in the future. Life imprisonment is not the solution to problems, but a problem to be solved. Because if hope is locked up, there is no future for society. Never deprive anyone of the right to start over! You, dear brothers and sisters, with your work and your service are witnesses of this right: the right to hope, the right to start anew.

This was only the most recent of many statements the Argentinian pontiff has made concerning punishment for criminal acts. Pope Francis has famously stated that capital punishment is “inadmissable” and changed the 1992 Catechism of the Catholic Church to reflect this view.  Francis has also made a number of statements condemning life imprisonment and even sentences that are merely long.

In so doing, Pope Francis has attacked one of the most convincing arguments against the death penalty, one employed by such figures as Saint John Paul II: that nowadays, violent criminals can be prevented from future harm to the community by being permanently separated from it in a prison.

In an article that appeared yesterday in Catholic World Report, Dr. Edward Feser points out that the “standard positon of Catholic opponents of capital punishment has for decades now been that the practice is unnecessary, insofar as dangerous offenders can be incarcerated for life instead.” Thus, the American Catholic bishops have said that “one alternative to the death penalty is life without the possibility of parole for those who continue to pose a deadly threat to society.”

Pope Francis has apparently rejected this view, saying life sentences are themselves a form of the death penalty. As Feser notes, on October 23, 2013, Francis stated:

All Christians and men of good will are thus called today to fight not only for the abolition of the death penalty … in all its forms, but also in order to improve prison conditions, with respect for the human dignity of the people deprived of their freedom. And I link this to life imprisonment. A short time ago the life sentence was taken out of the Vatican’s Criminal Code. A life sentence is just a death penalty in disguise.

Feser also draws attention to Pope Francis’s concern that life sentences and other long sentences deprive criminals of “hope.” In a March 20, 2015 letter to the president of the International Commission against the Death Penalty, Pope Francis wrote:

Life imprisonment, as well as those sentences which, due to their duration, render it impossible for the condemned to plan a future in freedom, may be considered hidden death sentences, because with them the guilty party is not only deprived of his/her freedom, but insidiously deprived of hope. But, even though the criminal justice system may appropriate the guilty parties’ time, it must never take away their hope.

The pontiff made similar comments, again with an emphasis on “hope,” in 2016, 2017, and 2018. In 2018, he went so far as to state that the Magisterium of the Church holds that life sentences are “a form of death penalty in disguise.”

Feser, co-author with Joseph M. Bessette of By Man Shall His Blood Be Shed: A Catholic Defense of Capital Punishment, observes that Pope Francis is talking about not the theological virtue of hope — hope for one’s eternal salvation — when he laments long prison sentences, but an earthly hope that convicts will have the freedom to plot the the course of their remaining days out from behind their prison bars.

“Pope Francis appears to be saying that it is wrong to inflict on any offender a sentence that is so long that it would prevent him from returning eventually to a normal life outside of prison,” Feser writes.

To illustrate the logical outcome of this view, the scholar asks readers to imagine aging serial killers being released from prison into the community. He then applied Pope Francis’s view that both death penalties and life sentences are wrong to the Nuremberg trials, at which many Nazi war criminals were sentenced to one or the other.

“Pope Francis’s view would imply that all of these sentences were unjust!” Feser writes.

“Indeed, Pope Francis’s position seems to entail that, had Hitler survived the war, it would have been wrong to sentence him to more than about twenty years in prison! For Hitler was in his fifties when he died, so that if he had been sentenced to more than that, he could not ‘plan a future in freedom’ — as a greengrocer or crossing guard, perhaps,” the author continues.

“Pope Francis’s views imply that the Nuremberg judges should have been at least open to the possibility of letting Hitler off with such a light sentence and letting him return to a normal life — despite being guilty of the Holocaust and of fomenting World War II!”

Moreover, the professor points out that an opposition to long custodial sentences is itself against the traditional teaching of the Church that “legitimate public authority has the right and duty to inflict punishment proportionate to the gravity of the offense” (Catechism of the Catholic Church, 2266).

Feser observes that serial killing and genocide are so grave that “nothing short of life imprisonment would be proportionate to their gravity.”

“To say that not only the death penalty, but life imprisonment or even long imprisonments, must never in principle be inflicted, would be to strip the principle of proportionality of all meaning,” he writes.

He adds that punishment itself can give hope to a pentitant convict because accepting “the penalty of death or life imprisonment as one’s just deserts can mitigate the temporal punishment one would otherwise have to suffer in purgatory.”

This view is supported by the Catechism, which states, “Punishment has the primary aim of redressing the disorder introduced by the offense. When it is willingly accepted by the guilty party, it assumes the value of expiation. Punishment then, in addition to defending public order and protecting people's safety, has a medicinal purpose: as far as possible, it must contribute to the correction of the guilty party” (CCC, 2266).

Feser recommends that Catholics not interpret Francis’s remarks on life imprisonment as the introduction of a “doctrinal novelty,” but merely as “a prudential judgement which Catholics need only respectfully consider but need not agree with.”