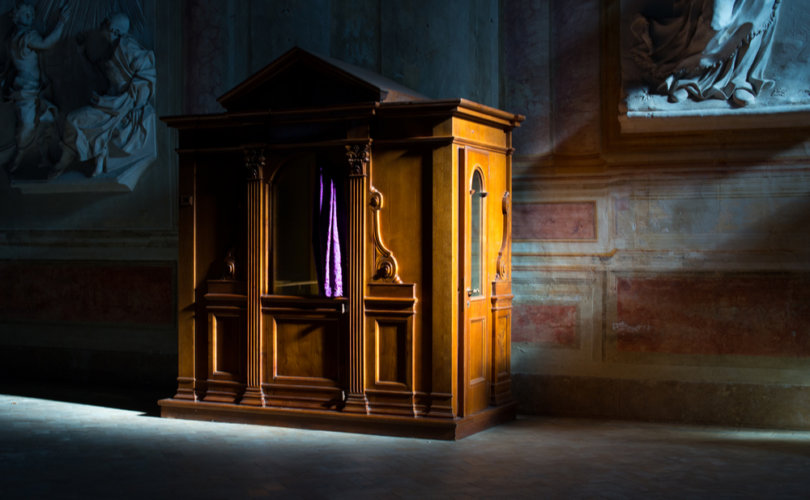 VATICAN CITY (LifeSiteNews) – In a sharp departure from Scriptural and Catholic Church teaching, Pope Francis has allegedly advised Spanish seminarians to “forgive all” even when there is no intention to repent.

The Catalan blog Germinans Germinabit originally reported that “according to several seminarians,” on December 10, Pope Francis specially emphasized during their visit to him in Rome that “everything must be forgiven” even if “there is no purpose of amendment,” and “that in no case can absolution be denied,” as this would render the priest guilty of an “unfair and moralistic” judgment.

The remarks defy perennial Catholic Church teaching as defined by the Council of Trent that “contrition,” that is, “sorrow of the soul and the reprobation of the sin committed, accompanied by the intention not to sin again in the future […] has always been necessary to ask for the remission of sins” (Denz. 1676).

The Barcelona-based seminarians reported that Francis said his planned speech for the day, which has been published by the Vatican website, would be “boring,” and that “it would be better if they asked questions directly and he would answer them, according to Germinans Germinabit.

— Article continues below Petition —
Tell Pope Francis that Fr. Frank Pavone's laicization must be overturned
Show Petition Text
46148 have signed the petition.
Let's get to 50000!
Thank you for signing this petition!
Add your signature:
Show Petition Text

As the blog noted, it is far from the first time Francis has ditched prepared remarks he has deemed “boring,” having done the same in 2013 and in 2019, aside from numerous other instances he refused a planned speech to speak off the cuff instead.

Nor is it the first time Francis has reportedly condemned wholesale the denial of absolution during the Sacrament of Confession. About a month before speaking to the Barcelona seminarians, Francis was said to have called priests who deny absolution “delinquents.”

According to Vatican News, in remarks to participants in the course for Rectors and Trainers of the Latin American Seminaries, Francis decried priests who in the confessional who say,

“‘And I can’t absolve you, I can’t because you are in mortal sin, I have to ask permission from the bishop … ’”

“This happens, please!” Francis continued. “Our people cannot be in the hands of criminals! And a priest who behaves like this is a delinquent, in every word. Whether you like it or not.”

As the Daily Compass pointed out, while granting absolution is the norm, there are cases in which it is in fact a priest’s duty to deny or defer it.

The Catechism of the Council of Trent states, “Above all, priests should be very careful not to give absolution to any penitent, whose confession they have heard, without obliging him to make full satisfaction for any injury to his neighbor’s goods or character for which he seems responsible. No person is to be absolved until he has first faithfully promised to restore all that belongs to others.”

Moreover, this catechism advises priests that if a penitent is “entirely unprepared, he should dismiss them without harshness, exhorting them in the kindest terms to take some time to reflect on their sins, and then return;” and, if the penitent is found “deficient” in both a “diligen[t]” examination of conscience and sorrow for sin, the priest should “admonish him to use greater care in his examination of conscience, and dismiss him as kindly as he can.”

Germinans Germinabit maintains that it is a “serious thing” that “the Holy See provided the media with words that Francis had not pronounced,” referring to the official transcript of Francis’ originally planned speech.

While the speech contains edifying reflections, it, too, is seriously in error, or at least is potentially gravely misleading, in its unqualified claim that Christ “assures us of paradise,” without pointing out that Christ taught that we must keep God’s commandments to have “eternal life” in Heaven.

The Daily Compass has noted, “It is important the Vatican Press Office intervenes to clarify and perhaps also to provide the actual text of the Pope’s words on December 10,” adding, “The entire Church has the right to know, since these are extremely serious statements.”