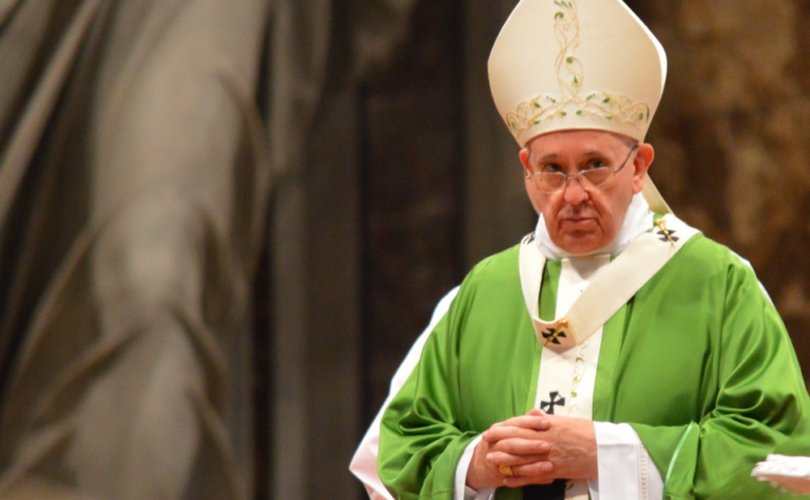 VATICAN CITY, Italy, October 12, 2018 (LifeSiteNews) – Caution is in order before taking Pope Francis’ condemnation of abortion Wednesday at face value, considering the pontiff’s praise for abortion’s purveyors and supporters, and his inconsistency when it comes to the life issue.

Pope Francis made some of the strongest comments he has yet on abortion at his October 10 General Audience, likening it to hiring a hitman. Different news and media outlets have reported on the pope’s remarks in various forms – though none have him using the word “abortion.”

“To interrupt a pregnancy means to kill somebody. Directly,” Francis said.

He also said, “a contradictory approach to life allows the suppression of human life in the mother’s womb in order to safeguard other values.”

“Is it right to kill a human being, no matter how small, to ‘solve a problem’?” the pope also asked. “No. How can it be ‘therapeutic, civilized or humane’ to kill an innocent and helpless life that is growing in the womb?”

While the comments were strong, Francis’ warm and welcoming demeanor throughout his pontificate toward advocates of the taking of life in the womb raise a red flag, as does his abortion criticism at times precluding other infidelity to the faith.

One such instance was when he condemned abortion but then green-lighted contraception using the threat of the Zika virus for rationale.

“Having followed this pontificate closely over the last five years I must admit that the positive pro-life statements, while on one hand being very welcome, leave me apprehensive,” said Maria Madise, International Director for the Society for the Protection of Unborn Children. “There has been a consistent pattern of strongly pro-life statements proceeding very troubling betrayals of the faith.”

“One cannot help wondering if this new pro-life statement will be followed by something very concerning,” Madise said.

“For instance,” she told LifeSiteNews, “I recall, when Pope Francis shocked all faithful Catholics by suggesting in an interview that contraception was indeed licit when there is a possibility of transmission of Zika virus.”

“He predicated his remarks with a staunch condemnation of abortion,” said Madise. ‘Abortion is not the lesser of two evils. It is a crime,’ he said.”

While Francis has made numerous statements indicating criticism of abortion, he has made others that are dubious regarding life, beginning not long into his papacy when he made headlines saying the Church is “obsessed” with gays, abortion, and birth control.

In January 2015, the pope made controversial comments about Catholics breeding “like rabbits,” and “responsible parenthood” that were considered insulting to large families.

The pope has appointed and elevated bishops and cardinals who are hostile to the pro-life issue, while also demoting decidedly pro-life prelates. And he has tried to put immigration on par with abortion.

He has also overseen a papal commission to re-examine Humanae Vitae (HV), Pope Paul VI’s landmark encyclical on contraception and human life. Catholic laity and clergy fear a “revisit” to HV will result in a diluting of Church teaching on birth control.

While he expressed support for the parents of Alfie Evans – the UK toddler at the center of a battle for parents’ rights with his parents going up against the British health system to keep their boy on life support, but sadly losing him earlier this year – Pope Francis was silent in the long battle leading up to Ireland’s referendum in May of this year where citizens there voted to legalize abortion in the heretofore predominantly Catholic country.

If it seems Pope Francis is all over the map on the life issue, Henry Sire, author of The Dictator Pope, the bestselling scathing expose of the Francis papacy, has offered potential insight into why.

Sire observed after his years of research into Francis’ Argentinian background that Francis was formed by the populist dictator Juan Perón. Then-Jorge Bergoglio was a follower from Peron beginning in his early years, Sire said, and Francis’ leadership very much resembles Peron’s style of government.

Thus, Pope Francis is essentially a “politician who relies on public relations” and who “is a dictator” in the tradition of Peron, Sire said.

Peronists, he said, are “complete opportunists” who are neither left nor right wing, and this “sums up Pope Francis exactly.”

Sire told LifeSiteNews it is not something new for the pontiff to speak critically about abortion, and the fact Catholics find themselves having to parse Francis’ words says as much as any comment at hand.

“Bergoglio/Pope Francis has consistently spoken against abortion, so there is no change of course here,” Sire said.

“Can it be interpreted as veering to the right, insofar as making the pronouncement at all?” he continued. “I don't know. I presume Francis and his team are currently feeling the need to conciliate the right wing, but I would need to see more signs of that before being sure.”

“It is a measure of this ultra-political pope that one is prompted to see a statement of Catholic moral teaching in political terms,” said Sire.

The pope’s recurrent inviting conduct with pro-aborts has been most disconcerting to pro-life Catholics.

Francis praised notorious Italian abortionist and leftist activist Emma Bonino in a February 2016 interview as one of Italy’s “forgotten greats,” doing so because of her work with refugees. Bonino is best known in Italy for practicing illegal abortion and promoting abortion. She was regarded for decades as its most prominent abortion supporter.

Between her abortion activism and being an abortionist herself, Bonino, also former Italian Minister of Foreign Affairs, is directly or indirectly responsible for the deaths of roughly six million Italian babies from 1968 to today.

Francis also invited Bonino to the Vatican in 2015 and received her in a private audience in November 2016.

Last year, Francis also honored Dutch politician and international abortion activist Liliane Ploumen by receiving her into the Order of St. Gregory – a pontifical honor given for “meritorious service to the Church.” Ploumen said she considered the award from the pope to be confirmation of her work.

Last year the pope removed all the members of the Pontifical Academy for Life, dropped the Academy’s pro-life pledge, and diluted its mandate to include immigration, arms control, and the environment. HE also added new anti-life members.

Madise told LifeSiteNews that conflicting statements from the Francis papacy necessitate that Catholics remain vigilant and prayerful for an authentic move toward fidelity for Church teaching.

“We must continue to pray for a genuine change of course in papal statements towards a consistent upholding of the perennial Church’s teaching,” she said. “However, we must also preserve vigilance amidst the many examples of contradiction that characterise the papal statements thus far.”