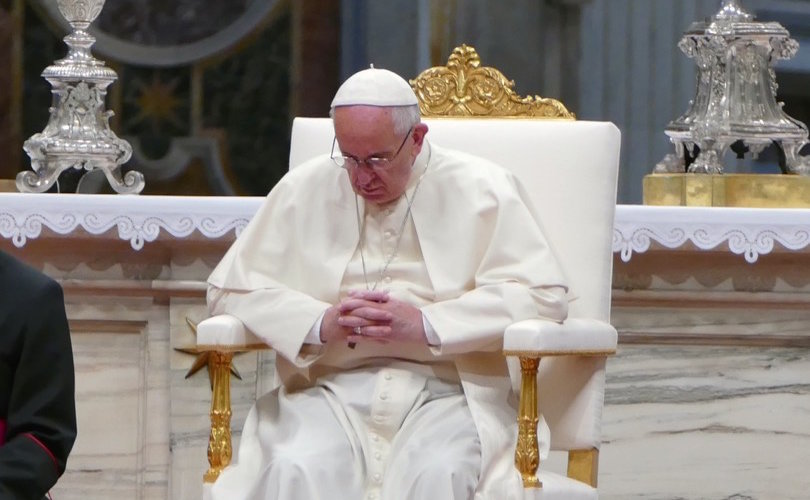 VATICAN CITY, September 27, 2019 (LifeSiteNews) ― In a question-and-answer session with Jesuits in Mozambique, Pope Francis underscored his dislike of “proselytization” by condemning the actions of a Catholic woman he had met that day.

“Today I felt a certain bitterness after a meeting with young people,” Pope Francis told the assembled Jesuits.

“A woman approached me with a young man and a young woman. I was told they were part of a slightly fundamentalist movement,” he continued.

“She said to me in perfect Spanish: ‘Your Holiness, I am from South Africa. This boy was a Hindu and converted to Catholicism. This girl was Anglican and converted to Catholicism.’ But she told me in a triumphant way, as though she was showing off a hunting trophy. I felt uncomfortable and said to her, ‘Madam, evangelization yes, proselytism no.’”

Pope Francis seemed to believe that the young people had been coerced in some way, for he told his listeners that whereas “evangelization is free,” “proselytism … makes you lose your freedom.”

“Proselytism is incapable of creating a religious path in freedom,” he said.

“It always sees people being subjugated in one way or another. In evangelization the protagonist is God, in proselytism it is the I.”

Pope Francis continued by saying that there were “many forms of proselytism’ and that “the one practiced by soccer teams, acquiring fans, is all right, obviously!”

“And then it is clear that there are those forms of proselytism for commerce and business, for political parties,” he added.

“Proselytism is widespread, we know that. But it doesn’t have to be the case with us. We must evangelize, which is very different from proselytizing.”

The pontiff repeated the old story about St. Francis telling his friars to evangelize and “if necessary, use words, too.”

“Proselytizing is convincing, but it is all about membership and takes your freedom away.”

He cited an address Benedict XVI gave at the Shrine of Our Lady of Aparecida in Brazil during his visit in 2017. The German pontiff had said that the Church does not engage in proselytism.

“Instead, she grows by ‘attraction’: just as Christ ‘draws all to himself’ by the power of his love, culminating in the sacrifice of the Cross, so the Church fulfils her mission to the extent that, in union with Christ, she accomplishes every one of her works in spiritual and practical imitation of the love of her Lord,” Benedict continued.

Catholics expressed their dismay about Francis’ rejection of the South African lady on social media. British Father Evan Julce contrasted Pope Francis’ approached with that of St. Padre Pio when an enthusiastic lady addressed him.

“A woman excitedly told Padre Pio that there was a prophecy that a Franciscan would convert 1/3 of the world,” Julce recalled over Twitter.

“The saintly Padre responded: ‘what would I want with only 1/3? I want everyone to come to Christ,’” he continued.

“He didn’t spurn her. Her spurred her (and himself) to  work more.”

A Twitter user named Heather replied, “I feel so sad for this lady. She was probably just so excited for the Pope to meet her convert friends.”