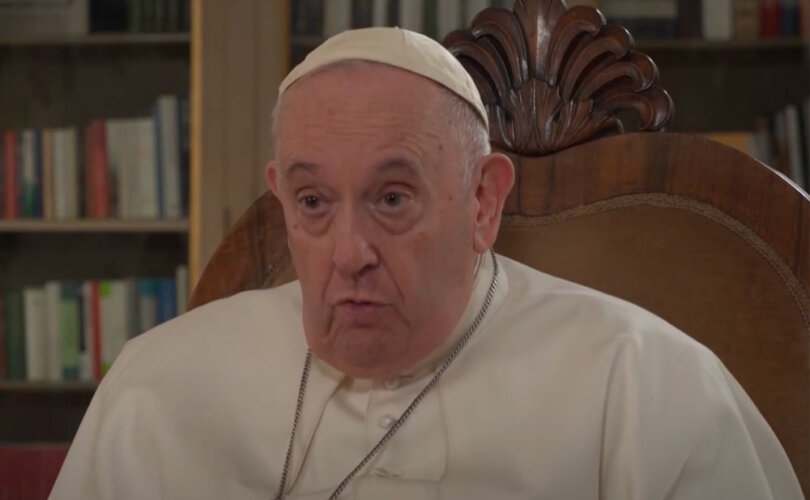 Pope Francis in conversation with the AP, Jan 24, 2022.Screenshot

VATICAN CITY (LifeSiteNews) — In a new interview conducted with the Associated Press, Pope Francis has once again issued brief, confusing comments on the issue of homosexuality, which seem to firmly contradict the Catholic Church’s teaching through the centuries.

“Being homosexual is not a crime,” the Pontiff said, “but it’s a sin.”

He made the remarks in a sit down interview he gave to the Associated Press (AP) on Tuesday, which was published just before the weekly general audience on Wednesday, January 25.

The AP wrote that Francis acknowledged some Catholic bishops “support laws that criminalize homosexuality or discriminate against the LGBTQ community,” but the Pope reportedly styled such positions as stemming from cultural backgrounds.

“Bishops in particular need to undergo a process of change to recognize the dignity of everyone,” the AP wrote, paraphrasing Francis’ comments.

“These bishops have to have a process of conversion,” Francis declared, calling for “tenderness, please, as God has for each one of us.”

Going further, the 86-year-old Pope called any laws which criminalize homosexuality “unjust,” adding that the Catholic Church must be involved in ending such laws. “It must do this. It must do this,” he stated.

“Being homosexual is not a crime,” Francis stated, before continuing: “It’s not a crime. Yes, but it’s a sin. Fine, but first let’s distinguish between a sin and a crime.”

Immediately following this, Francis added that “it’s also a sin to lack charity with one another.”

Expanding on his comments on LGBT-identifying individuals, Francis declared that “we are all children of God, and God loves us as we are and for the strength that each of us fights for our dignity.”

The explanation for the collapse of Catholic belief and practice captured in one papal utterance: “God loves us as we are.” https://t.co/9PK6r2DC9M

His opinion was not universally shared, however. In a statement provided to LifeSite, a Dominican theologian commented that “while not all sins should be made into crimes, Christian nations have generally treated homosexual activity as something harmful to society, which therefore needed to be declared illegal.”

“Recent experience shows the wisdom of this, since the repeal of laws against such activity has led everywhere to a general confusion and decline of sexual morality, and even to the scarcely credible situation of people being uncertain about the nature of men and women,” the theologian added.

However, the Holy Father’s statements – while brief in the AP’s report – come into conflict with certain key points of Catholic teaching. The Congregation for the Doctrine of the Faith’s 1975 document, Persona Humana, reads: “There can be no true promotion of man’s dignity unless the essential order of his nature is respected.”

Under Cardinal Joseph Ratzinger in 1986, the CDF then issued a document instructing bishops on the pastoral care of homosexual persons. The CDF admonished bishops to ensure they, and any “pastoral programme” in the diocese, are “clearly stating that homosexual activity is immoral.”

— Article continues below Petition —
Stand with brave priest who was SUSPENDED after defying the LGBT agenda against his abbot’s wishes!
Show Petition Text
12789 have signed the petition.
Let's get to 15000!
Thank you for signing this petition!
Add your signature:
Show Petition Text

Saints and Fathers called for physical punishment for homosexuality

The saints and Fathers of the Church are also equally explicit in their call for public action to be taken against acts of homosexuality, no matter whether the acts themselves were private.

The saints’ writings, though often misquoted by modern society, do not call for punishment for the mere temptation of homosexuality which one might experience, but rather for homosexual actions. This forms the basis for what the CDF wrote in 1986: namely, that a homosexual inclination is not a sin in itself, but is nevertheless “a more or less strong tendency ordered toward an intrinsic moral evil; and thus the inclination itself must be seen as an objective disorder.”

In his Summa Theologiae, St. Thomas Aquinas writes that acts of homosexuality are among the most weighty, and thus the worst kind of all the sins of lust. Styling it the “unnatural vice,” St. Thomas writes:

Therefore, since by the unnatural vices man transgresses that which has been determined by nature with regard to the use of venereal actions, it follows that in this matter this sin is gravest of all.

The saint adds that homosexual acts are a violation of natural reason, while other immoral, sexual actions “imply a transgression merely of that which is determined by right reason.”

Those foul offenses that are against nature should be everywhere and at all times detested and punished, such as were those of the people of Sodom, which should all nations commit, they should all stand guilty of the same crime, by the law of God which hath not so made men that they should so abuse one another. For even that very intercourse which should be between God and us is violated, when that same nature, of which He is the Author, is polluted by the perversity of lust.

So also did St. Peter Damian, in his Liber Gomorrhianus addressed to Pope Leo IX, advocate for public punishment for acts of homosexuality. He wrote that, regarding clerics, any monk who practices such acts “should be removed in all ways from his office.”

Just as Saint Basil establishes that those who incur sins… should be subjected not only to a hard penance but a public one, and Pope Siricius prohibits penitents from entering clerical orders, one can clearly deduce that he who corrupts himself with a man through the ignominious squalor of a filthy union does not deserve to exercise ecclesiastical functions, since those who were formerly given to vices… become unfit to administer the Sacraments.

St. Peter Damian himself drew from the Early Church Father St. Basil of Caesarea, who also outlined retributions for homosexual acts. St. Basil stipulated that any cleric or monk who abused

adolescents or children or is caught kissing or committing some turpitude, let him be whipped in public, deprived of his crown [the tonsure] and, after having his head shaved, let his face be covered with spittle; and bound in iron chains, condemned to six months in prison, reduced to eating rye bread once a day in the evening three times per week. After these six months living in a separate cell under the custody of a wise elder with great spiritual experience, let him be subjected to prayers, vigils and manual work, always under the guard of two spiritual brothers, without being allowed to have any relationship… with young people.

Another Early Church Father and contemporary of St. Basil, St. John Chrysostom, echoed this call for some earthly punishment for such actions. In his commentary on St. Paul’s Epistle to the Romans, St. John writes about homosexuals:

So, I say to you that they are even worse than murderers, and that it would be better to die than to live in such dishonor. A murderer only separates the soul from the body, whereas these destroy the soul inside the body.

In his first letter to the Corinthians, St. Paul states that homosexual actions are sinful, explaining that “neither fornicators, nor idolaters, nor adulterers” will “inherit the kingdom of God,” but rather, according to his letter to the Romans, those who practice homosexuality will receive “in their own persons the due penalty for their error.”