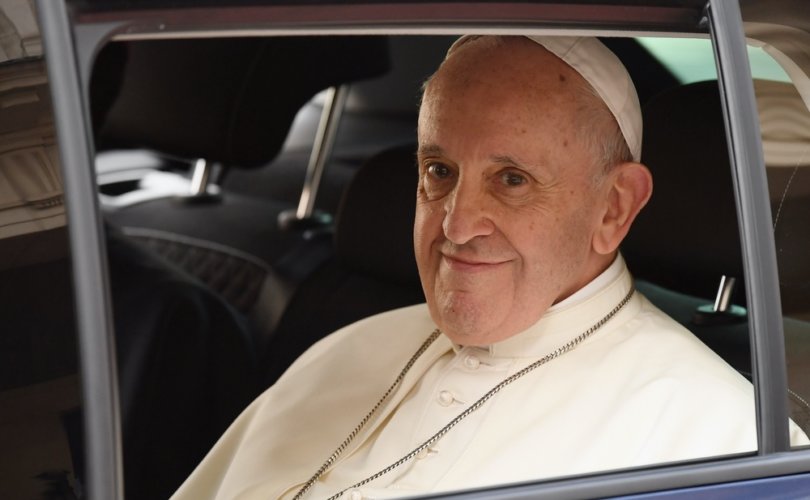 VATICAN CITY, November 7, 2019 (LifeSiteNews) ― Ignoring Saint Paul’s condemnation of graven images, Pope Francis stated that the saint provided an example of the “inculturation” of the Gospel when he preached in Athens.

In a homily during his usual Wednesday audience, the pontiff stated that St. Paul used his encounter with the pagan idols of the ancient city “to build a bridge to dialogue with that culture.”

“Paul chose to enter into familiarity with the city and began therefore to frequent the most significant places and people,” Francis said.

The pontiff noted that St. Paul spoke with judges, philosophers, and “many others,” meeting “all the people” and not “locking himself away.”

“In this way Paul observed the culture, observed the environment of Athens,” Pope Francis added, and then quoted from his own Evangelium Gaudium to say that Paul “started from a contemplative gaze” to discover “that God who lives in His houses, in His streets, and in His squares” (EG, 71).

In what sounded like an allusion on the expulsion of wooden carvings depicting the pagan fertility goddess Pachamama from a Catholic Church during the recent Synod on the Amazon, Pope Francis stated that St. Paul did not look upon the pagan world with “hostility” but with faith.

“Paul did not look at the city of Athens and the pagan world with hostility but with the eyes of faith,” he said. “And this questions our manner of looking at our cities: do we look at them with indifference? With contempt? Or with the faith that recognizes the children of God in the middle of anonymous crowds?”

The pontiff stated that Paul had chosen to view the city in a way that led him “to make an opening between the Gospel and the pagan world.”

“In the heart of one of the most famous institutions in the ancient world, the Areopagus, he realized an extraordinary example of inculturating the message of faith: he announced Jesus Christ to the adorers of idols, and not by attacking them, but by making himself ‘pontiff, builder of bridges,’” Francis said, quoting a homily he gave in May 2013.

Paul did this, Francis said, by noticing an altar the Athenians had set up to “the unknown god” and telling his hearers that he had come to tell them about the unknown god they already adored.

“Starting from this ‘devotion’ to the unknown god, to enter into empathy with his [hearers], he proclaimed that God ‘lives among the citydwellers” and “He does not hide Himself from those  who seek him with sincere hearts, although they do it gropingly,” Pope Francis said, again quoting from Evangelium Gaudium.

“It’s just this presence that Paul seeks to reveal, ‘He who, without knowing him, you adore, I announce Him to you (Acts 17:23),” he continued.

However, in describing St. Paul’s homily to the Athenians, the Argentinian pontiff neglected to mention that the great missionary of Tarsus told his hearers that the God who created everything does not live in temples (Acts 17:24) or need offerings (Acts 17:25) and is not like graven images made by human beings (Acts 17:29).

“Since we are God’s offspring, we ought not to think that the deity is like gold, or silver, or stone, an image formed by the art and imagination of mortals,” Paul said.

Instead, Pope Francis noted that the majority of Paul’s hearers rejected his message when he announced Christ’s resurrection from the dead — “the stumbling block”― and so his attempt seemed to be a failure. However some do accept the Gospel, “among these a man, Dionigius, a member of the Areopagus, and a woman, Damaris.”

Pope Francis found it significant that Damaris is a woman.

“Even in Athens, the Gospel can take root and spread by two voices: that of a man and that of a woman!”

He concluded, “We ask today of the Holy Spirit to teach us to build bridges with the culture, with those who don’t believe or with those who have a different belief from ours. To always build bridges, always the extended hand, no aggression. We ask Him for the capacity to inculturate with care the message of faith, placing a contemplative gaze on those who are ignorant of Christ, moved by a love that warms even the hardest hearts.”

Philosopher Professor Claudio Pierantoni, one of the original signatories of the letter to the world’s bishops accusing Pope Francis of heresy, indicated that the pontiff was both right and wrong in his homily about St. Paul and the Athenians.

“It is true that in this episode, Paul takes advantage of some positive elements in the pagan philosophy, such as the approximation to the doctrine of Creation, and to Man’s special relation to God as ‘God’s offspring,’” Pierantoni told LifeSiteNews via email.

“That could be correctly described as ‘making bridges.’ But we must be careful not to interpret this as mere ‘dialogue’ between religions that can peacefully coexist on the same level,” he continued.

The professor cited verses Acts 29-30 to point out that paganism no longer has reason to exist.

“The pagan religion, with its idolatrous cults, had a reason for existing, because of ignorance, until the moment of the positive, historical revelation of God.”

Pierantoni noted that Francis’ homily repeatedly speaks of “aggression,” as if it were opposed to the spirit of Paul’s supposed “inculturation” and “dialogue,” and saw in it a reference to “the present controversy about the idolatrous rites recently held in the Vatican Gardens, and to the taking away of the wooden images of the Pachamama from a Church near the Vatican.”

“But St. Paul’s evangelization, although it certainly uses the means of dialogue, of course does not have in mind a pacific coexistence of all religions as an ideal,” he continued.

“[Paul’s] message is not just about some neutral exchange of opinions among different religious beliefs, but the announcement of something new that terminates the ‘times of ignorance’ and makes idolatry into an abominable sin.”

The professor cited verses Paul’s First Letter to the Corinthians that also condemn idols: “What do I imply then? That food sacrificed to idols is anything, or that an idol is anything? No, I imply that what pagans sacrifice, they sacrifice to demons and not to God. I do not want you to be partners with demons” (1 Cor. 10:19-21).