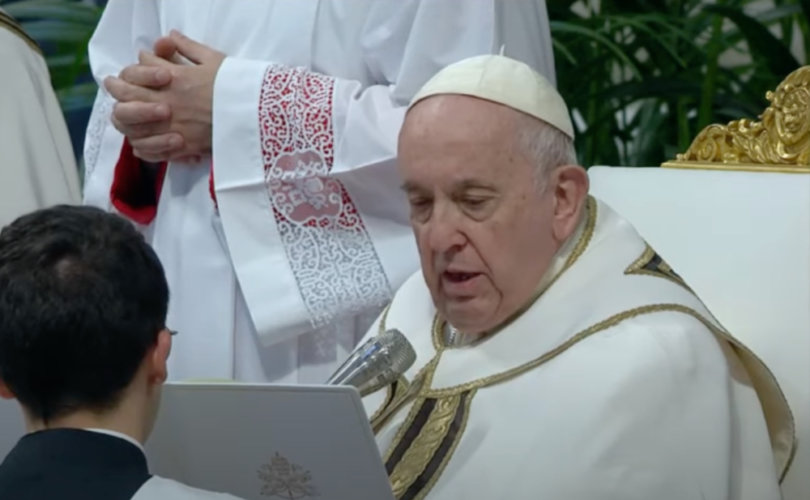 VATICAN CITY (LifeSiteNews) – Marking the 60th anniversary of the start of the Second Vatican Council, Pope Francis attacked “traditionalism” as being “evidence … of infidelity” to the Catholic Church.

The Argentinian Pontiff made his remarks in his homily during a Mass in St. Peter’s Basilica on October 10, marking the 60th anniversary of the opening of the ecumenical Second Vatican Council.

Using a passage from St. John’s Gospel – “Do you love me? Feed my sheep” – Francis launched his attack on the traditionalist movement.

Stating that “we are always tempted to start from ourselves rather than from God, to put our own agendas before the Gospel,” he decried those who wished to “retrace our steps.”

“Yet let us be careful,” he said, “both the ‘progressivism’ that lines up behind the world and the ‘traditionalism’ – or ‘looking backwards’ – that longs for a bygone world are not evidence of love, but of infidelity.”

Francis styled both “traditionalism” and “progressivism” as “forms of a Pelagian selfishness that puts our own tastes and plans above the love that pleases God, the simple, humble and faithful love that Jesus asked of Peter.”

Praising the Council for its actions, Francis stated that it “rediscovered the living river of Tradition without remaining mired in traditions.”

He told the assembled congregation not to be concerned with being “on the climb” towards heaven, or with attempts to “shepherd yourselves.” Rather, Francis urged a rejection of everything in the service of fraternity.

How often, in the wake of the Council, did Christians prefer to choose sides in the Church, not realizing that they were breaking their Mother’s heart! How many times did they prefer to cheer on their own party rather than being servants of all? To be progressive or conservative rather than being brothers and sisters? To be on the “right” or “left,” rather than with Jesus?

In promoting Vatican II, Francis’ homily was flush with ironic phraseology. While his 2021 restrictions on the traditional Mass were entitled Traditionis custodes (guardians of Tradition), Francis yesterday attacked those who “present themselves as ‘guardians of the truth’ or ‘pioneers of innovation’ rather than seeing themselves as humble and grateful children of Holy Mother Church.”

READ: Abp Viganò on the ‘roots of deviation’ of Vatican II and how Francis was chosen to revolutionize the Church

His restrictions on the ancient liturgy, pronounced in the name of Vatican II, have since decimated parishes and communities, yet Francis said that the Church should “leave aside the ‘isms,’ for God’s people do not like polarization.”

“How timely the Council remains,” he argued. “It helps us reject the temptation to enclose ourselves within the confines of our own comforts and convictions. The Council helps us imitate God’s approach, which the prophet Ezekiel has described to us today: ‘Seek the lost sheep and lead back to the fold the stray, bind up the injured and strengthen the weak’ (cf. Ezek 34:16).”

The Pontiff closed by repeating his call to “let us overcome all polarization and preserve our communion.”

However, some pointed to Francis’ own record on “polarization,” warning that his homily was a promotion of his assault on the Church’s Tradition. “This is Bergoglian speak for ending the Traditional Latin Mass,” wrote catechist Deacon Nick Donnelly.

“Let us overcome all polarization and preserve our communion!” said – (pope) Bergoglio during his homily on the 60th anniversary of Vatican II

This is Bergoglian speak for ending the Traditional Latin Mass

Donnelly added that Francis has “relentlessly attacked ‘the living river of Tradition’ since the beginning of his pontificate.”

Francis and his close advisors have continually cited Vatican II in their recent moves against the Church’s Tradition, including in Traditionis custodes and the current Synod on Synodality. Indeed, the latter has been described as “an extension” of Vatican II since the process was announced last year.

READ: ‘A different Church’: Pope calls for synod on synodality to usher in ‘change’

Speaking to LifeSiteNews last year, Matt Gaspers – managing editor of Catholic Family News – said that the Synod: “calls to mind what Archbishop Carlo Maria Viganò wrote in his first major intervention regarding the Council (June 9, 2020), namely, ‘that from Vatican II onwards a parallel church was built, superimposed over and diametrically opposed to the true Church of Christ. This parallel church progressively obscured the divine institution founded by Our Lord in order to replace it with a spurious entity, corresponding to the desired universal religion that was first theorized by Masonry’.”

While the Second Vatican Council is regularly and overwhelmingly referenced in the modern day Vatican and current pontificate, both Popes of the Council — John XXIII and Paul VI — and Vatican II itself clearly stated that, unlike all previous Councils, it had neither the aim nor the intention to propose its own doctrine in a definitive and infallible way.

In his address at the solemn opening of the Council, Pope John XXIII said: “The main purpose of this Council is not, therefore, the discussion of one or another theme of the fundamental doctrine of the Church.” He added that the character of the Council’s magisterium would be “predominantly pastoral” (October 11, 1962).

Meanwhile Pope Paul VI said in his address at the last public session of the Council, that Vatican II “made its program” from “the pastoral character” (7 December 1965). Furthermore, as Bishop Athanasius Schneider has recalled, a November 16, 1964, note by the Council’s Secretary-General reads: “Taking conciliar custom into consideration and also the pastoral purpose of the present Council, the sacred Council defines as binding on the Church only those things in matters of faith and morals which it shall openly declare to be binding.”