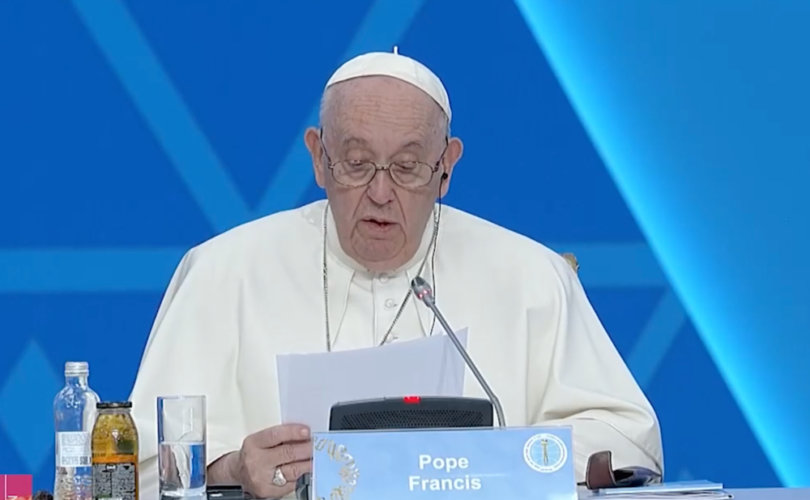 Pope Francis delivering his address at the Congress of World and Traditional Religions in Kazakhstan, September 15, 2022. Vatican News video screenshot

UPDATE: The Congress has withdrawn the original Declaration and issued a new one since this article was published. Paragraph 10 now reads: “We note that pluralism in terms of differences in skin color, gender, race, language and culture are expressions of the wisdom of God in creation. Religious diversity is permitted by God and, therefore, any coercion to a particular religion and religious doctrine is unacceptable.”

NUR-SULTAN, Kazakhstan (LifeSiteNews) – Pope Francis has joined ecumenical and political leaders in signing a document stating that the “pluralism and differences in religion…are expressions of the wisdom of God’s will in creation.”

The declaration, which can be downloaded here with English text at the end of the document, was the culmination of the 7th Congress of Leaders of World and Traditional Religions held in Kazakhstan.

It was read aloud by the leaders of the Congress on September 15, feast of Our Lady of Sorrows, after which Pope Francis delivered an address echoing the themes and language of the Declaration.

The Declaration, which Pope Francis joined in signing, contains a paragraph stating that God willed the plurality of religions which are present in the world. Paragraph 10 reads: “We note that pluralism and differences in religion, skin color, gender, race and language are expressions of the wisdom of God’s will in creation. Thus any incident of coercion to a particular religion and religious doctrine is unacceptable.” (Emphasis original)

–– Update: The Congress has withdrawn the original Declaration and issued a new one since this article was published. Paragraph 10 now reads: “We note that pluralism in terms of differences in skin color, gender, race, language and culture are expressions of the wisdom of God in creation. Religious diversity is permitted by God and, therefore, any coercion to a particular religion and religious doctrine is unacceptable.”

The Declaration also noted how the Congress participants “stand in solidarity with the efforts of the United Nations and all other international, governmental and regional institutions and organizations, to promote dialogue among civilizations and religions, states and nations.” (Emphasis original)

The Kazakhstan Declaration paid homage to, and noted its dependance on, the Abu Dhabi document which Francis and the Grand Imam of Al-Azhar, Ahmed el-Tayeb, signed in February 2019. That document itself has been described as seeming to “overturn the doctrine of the Gospel.”

“We recognize the importance and value of the Document on Human Fraternity for World Peace and Living Together between the Holy See and Al-Azhar Al-Sharif,” read the Kazakh Declaration.

The Declaration also stated that “We pay special attention to the importance of strengthening the institution of the family,” but in his closing remarks, Kazakhstan’s president Kassym-Jomart Tokayev said that the meeting had paid particular attention to digital and “gender issues.”

The recent Declaration almost repeats the Abu Dhabi document word for word, for the 2019 document stated: “The pluralism and the diversity of religions, colour, sex, race and language are willed by God in His wisdom, through which He created human beings.”

It is contrary the de fide doctrine of the Catholic Faith that God wills the salvation of all men ONLY through the propitious death of our Lord Jesus Christ pic.twitter.com/sdFG46XdDt

At the time, Bishop Athanasius Schneider – auxiliary of Astana, Kazakhstan – raised concerns about that passage in the Abu Dhabi document. He was later told in a private meeting with Pope Francis in 2019 that the text only referred to “the permissive will of God,” not the positive will.

According to Bishop Schneider, in implementing the Abu Dhabi document without correcting its erroneous affirmation on the diversity of religions, “men in the Church not only betray Jesus Christ as the only Savior of mankind and the necessity of His Church for eternal salvation, but also commit a great injustice and sin against love of neighbor.”

Following his meeting with the Pope, and in light of Francis’ repeated promotion of the document, Bishop Schneider warned that the Abu Dhabi document was directly linked to problematic passages from Vatican II’s Dignitatis Humanae.

RELATED: Bishop Schneider: There is no divine positive will or natural right to the diversity of religions

“Dignitatis Humanae’s assertion that man has a natural right (positively willed by God) not to be impeded in choosing, exercising and spreading, even publicly, any form of religion according to his conscience, and the Abu Dhabi Document’s assertion that God wills the diversity of religions, in the same way as He wills positively the diversity of sex (based on man’s nature itself), will surely one day be corrected by the Papal Magisterium of the Cathedra of St. Peter — the cathedra veritatis.”

Prior to the signing of the Kazakhstan Declaration today, Bishop Schneider told the assembled media that the entire Congress risked undermining teaching regarding the primacy of the Catholic faith.

Speaking after Pope Francis met with Kazakhstan clergy, Bishop Schneider said that “the congress as such has a good aim to promote mutual respect and understanding in the world today.” Yet he noted how “it has also a danger because it could give the impression of a ‘supermarket of religions’ and this is not correct because there is only one true religion, which is the Catholic Church, founded by God himself.”

The bishop added that Francis’ strong support for the Congress could suggest that Catholicism is on a par with other religions. “This is not correct because there is only one true religion, which is the Catholic Church, founded by God himself, but commanded to all man, to all religions, to believe and accept his son Jesus Christ, the only Savior,” he said.

Yesterday, Pope Francis delivered his opening address to the Congress, in which he pushed for numerous religions and decried “proselytism and indoctrination.” The Pontiff also appeared to contradict previous Papal teaching regarding the promotion of other religions, saying that everyone “has the right to render public testimony to his or her own creed, proposing it without ever imposing it.”

LifeSiteNews provided an in-depth decription of the Congress prior to the event, which can be read HERE.