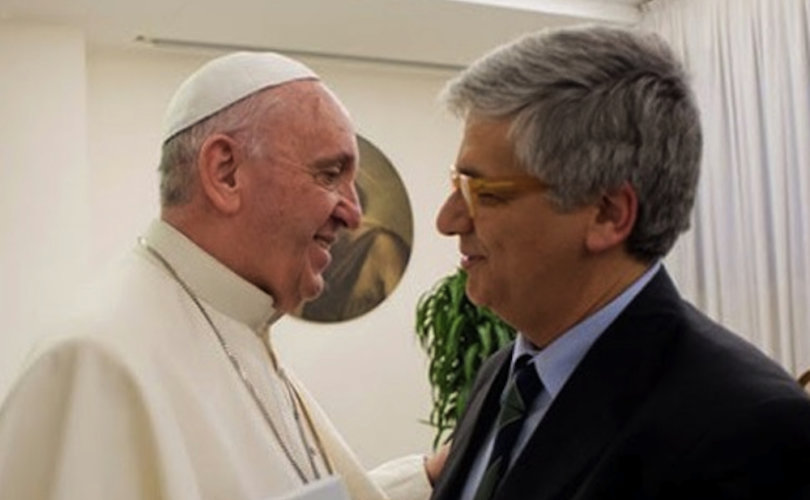 January 29, 2019 (LifeSiteNews) – Catholic media that identify and condemn statements and actions not in line with Catholic doctrine are opposing the “centrality of compassion” and hampering evangelization in substance, Pope Francis told the bishops of Central America during his meeting with them at World Youth Days in Panama.

His words triggered an editorial piece by Andrea Tornielli on VaticanNews in which the new editorial director of the Dicastery for Communication doubled down on Francis’ attacks, comparing his words to a “photograph of a reality that unfortunately is plain for all to see” and adding his own criticisms of “media that proclaim to be Catholic.”

These are the Pope’s precise words:

I am worried about how the compassion of Christ has lost a central place in the Church, even among Catholic groups, or is being lost – not to be so pessimistic. Even in the Catholic media there is a lack of compassion. There is schism, condemnation, cruelty, exaggerated self-praise, the denouncing of heresy…

We have here a typical example of the dichotomy Pope Francis has established in many ways between pastoral care and the upholding of the Church’s teaching, where “doctrine” and the law are held to be obstacles to mercy and inclusion.

It isn’t difficult to imagine which “Catholic media” he was alluding to. Many Catholic mainstream journals, magazines, and websites in the Western world – often those with official links to local episcopates – are obviously liberal, unclear on very clearly established points of doctrine, following the flow of “new paradigms” and eager to keep up with the times.

Those that hang on to time-tested truths and traditional morality are easy to identify. It is they that voice concern about – say – the shifting standards of Amoris laetitia, openness to homosexual couples as such, the scrapping of perennial Church teaching on the death penalty, etc. This all would count as “a lack of compassion”: not welcoming sinners and at the same time pretending to be praiseworthy by contrast.

Interestingly, these Catholic media are presented as being guilty of “schism”. That surely constitutes a doctrinal condemnation – a case of the pot calling the kettle black, perhaps? “Cruelty”, within that logic, would reside in the designation of evil or error by its name – to which the ultimate modern answer would be: “Who am I to judge?”

Including the “denouncing of heresy” in a list of objectively negative actions or attitudes is also remarkable. It rings as the condemnation of a pursuit that has been proper to the Catholic Church from the beginning, starting with unambiguous statements by Jesus Christ Himself (“Get thee behind me, Satan” is a good example) and going on throughout the centuries with the curse of the Councils on those who deliberately err, refusing the truths taught by the Church: “Let him be anathema.”

To be sure, that requires thought, reflection, analysis and judgment: using the intellect to assess the veracity or the conformity of a point of view with regard to definite truths held by the Catholic Church. If heresy is wrong – and can cause souls to be lost – then denouncing heresy is of itself great charity, that aims to glorify God and, out of love, seeks to help others to know and to love Him as He is.

Why would that be contrary to “compassion”?

Tornielli, a friend of Pope Francis and long his unofficial spokesman, went out of his way to expand on the aforementioned statement condemning a certain variety of Catholic media. In his role of editorial director, he adopted an editorial tone, paraphrasing the Pope’s comments:

“His words are like a ‘photograph’ of a reality which unfortunately is plain for all to see: the spread – even among media that proclaim to be Catholic – of the habit of wanting to judge everything and everyone by putting one’s self on a pedestal and raging against one’s brothers and sisters in the faith who have different opinions,” he said.

Tornielli added, “We should not believe that such a profoundly anti-Christian attitude (even if conveyed under Catholic’ auspices) is a transitory phenomenon, linked only to the daily criticism of the present pontificate. In fact, at the root of this attitude lies something deeper and less incidental: the belief that in order to exist and confirm my identity, I must always find an enemy against which to direct my rage. Someone to attack, someone to condemn, someone to judge heretical.”

So Catholic media and Catholic journalists who are anxious to uphold the entirety of the Catholic faith would in fact be insecure individuals who can only come alive when they are seeking errors in those they do not like. This is psychobabble pure and simple, and completely ignores the central question: when denouncing this or that “heresy,” are they right or wrong?

Tornielli illustrated his point with the description of Pope Francis’ visit to the Las Garzas de Pacora Juvenile Detention Center to spend a few hours with young delinquents who could not participate in the World Youth Day events, showing the importance of compassion and mercy for sinners, in the same way that “Jesus, who was capable of looking at people not for the mistakes, sins or crimes they have committed, but for what their lives could become if touched by mercy, compassion, and the infinite love of God Who embraces you before judging you,” as the Pope explained to the young people.

Between Tornielli’s lines lies the idea that certain “Catholic media” are incapable of understanding this – quite a hasty judgment.