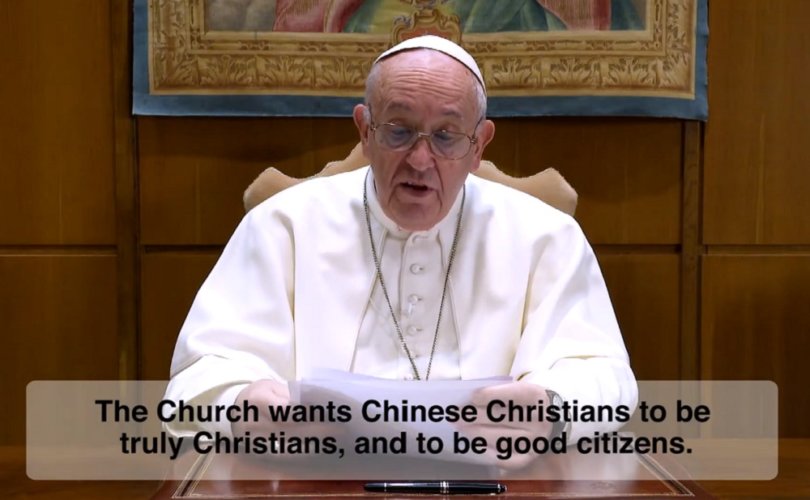 VATICAN CITY, September 29, 2020 (LifeSiteNews) — Pope Francis is refusing to meet with U.S. secretary of state Mike Pompeo during the latter’s visit to Rome this week, apparently over Pompeo’s criticism of the Vatican for renewing a controversial agreement with communist China.

Pompeo will be meeting with Vatican secretary of state Cardinal Pietro Parolin and foreign minister Archbishop Paul Gallagher, The Independent reports, but the Pope will not meet with him, citing the optics of a meeting so close to the U.S. presidential election.

However, speculation abounds that the real reason for the snub is Pompeo’s public criticism of the Vatican’s relationship with the authoritarian, anti-Christian Chinese government.

“Now more than ever, the Chinese people need the Vatican’s moral witness and authority in support of China’s religious believers,” Pompeo wrote earlier this month. “The Holy See has a unique capacity and duty to focus the world’s attention on human rights violations, especially those perpetrated by totalitarian regimes like Beijing’s.”

At issue is an agreement China and the Vatican signed in 2018, under which the Vatican has some influence on the appointment of Catholic bishops in the country, while the Vatican recognizes other bishops appointed by Beijing without its input.

“Two years on, it’s clear that the Sino-Vatican agreement has not shielded Catholics from the Party’s depredations, to say nothing of the Party’s horrific treatment of Christians, Tibetan Buddhists, Falun Gong devotees, and other religious believers,” Pompeo continued. “Communist authorities continue to shutter churches, spy on and harass the faithful, and insist that the Party is the ultimate authority in religious affairs.”

The secretary of state added that Chinese Catholics are “confused” by the Vatican’s legitimization of schismatic priests and bishops “whose loyalties remain unclear” and added that “what the Church teaches the world about religious freedom and solidarity should now be forcefully and persistently conveyed by the Vatican in the face of the Chinese Communist Party’s relentless efforts to bend all religious communities to the will of the Party and its totalitarian program.”

The Guardian reports that Pompeo intends to raise the issue during his visit to the Vatican and has warned that the Vatican will “endange[r] its moral authority” if it renews the agreement next month.

“2014, the [Chinese Communist Party], inside, made the decision: Every year, they want 2 billion dollars to pay to the Vatican, to influence the Vatican policy about China/Vatican — and [regarding] the Christian and Catholic [mistreatment], they wanted Vatican to shut up, to follow the CPC about religion, you know the policy — that’s disaster,” Chinese dissident Guo Wengui claimed in June.

Wengui did not offer supporting evidence at the time, but China expert and Population Research Institute founder Steven Mosher says that while Guo’s numbers may be inflated, “China is clearly throwing a lot of money around on the world stage in its drive for dominance,” and “the Vatican has acknowledged accepting such donations, at least in terms of medical supplies.”

In March, the Pope said Christians in China should be “good citizens” and “promote the Gospel, but without engaging in proselytism.”