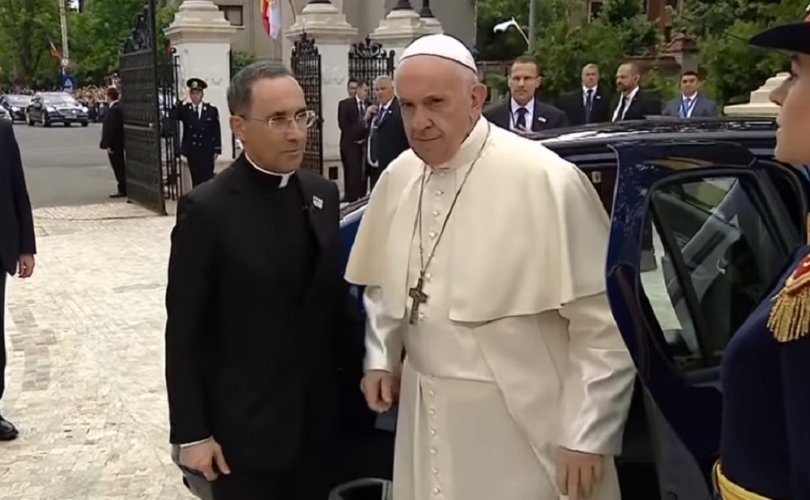 BUCHAREST, June 26, 2019 (LifeSiteNews) — On his recent visit to Romania, Pope Francis recalled the words of St. John Paul II that the Church “breathes with two longs” but added that the “status quo” of division between the Catholic and Orthodox Churches “must be maintained.”

During a congenial repast on May 31, Pope Francis fielded questions from Jesuit priests. At the end of the first day of his apostolic visit to Romania, he met at the papal nunciature the 22 Jesuits working in the country. They were introduced to the pontiff by Fr. Gianfranco Matarazzo, provincial of the Euro-Mediterranean Province of the Jesuits, which includes Italy, Malta, Romania, and Albania.

It was during his visit to Romania that the Pope celebrated a liturgy in which seven Catholic bishops of Romania were beatified as martyrs to the Faith. Following the occupation of Romania by forces of the Soviet Union in the wake of World War II, the Eastern-rite (Greek) Catholic Church was officially dissolved by the communist government. In his homily, the pope paid tribute to the bishops and fellow Catholics who endured decades of persecution.

In reference to Eastern-rite Catholics, with whom the Orthodox share aspects of liturgy and spirituality, Father Basile Tofane asked the pope during the meeting with fellow Jesuits:

The Greek Catholic Church has played a very important role in our country. Some, however, say that this Church has fulfilled its historical role and that the faithful should choose to enter the Latin or Orthodox Church. But tomorrow you will beatify seven martyred bishops. This makes me understand that this Church has a future. What do you think?

My position is that of Saint John Paul II. The Church breathes with two lungs. And the eastern lung can be Orthodox or Catholic. The status quo must be maintained. There is a whole culture and a pastoral life that must be preserved. But uniatism is no longer the way today. In fact, I’d say it’s not licit today. Today, however, the situation must be respected and the Greek Catholic bishops helped to work with the faithful.

The Eastern Orthodox differ markedly from Catholics on several points of doctrine. The Orthodox tend to defend the liceity of artificial contraception within marriage, for example, and Orthodox bishops will bless up to two “remarriages” while the divorcé’s spouse is still living. The Orthodox also deny the Catholic dogmas of Original Sin and the Immaculate Conception. Most obviously, the Orthodox reject the supreme authority of the pope, instead considering the bishop of Rome “first among equals” in the episcopal hierarchy, with no special powers of infallibility.

LifeSiteNews asked Bishop Athanasius Schneider of Kazakhstan for his reflections on the pope’s remarks. In response, Bishop Schneider referred to the recent Declaration of Truths, of which he was a co-signer with Cardinal Raymond Burke and other prelates. The Declaration of Truths of the Faith was intended to address the “almost universal doctrinal confusion and disorientation” regarding doctrinal matters in the Church. The declaration implicitly references points of confusion that have arisen during the current pontificate and from Pope Francis’s own statements.

In the recently published Declaration of Truths I have expressed with the other Cardinals and Bishops precisely those truths that deny or obliterate the statements of Pope Francis, and in particular regarding the theme of ecumenism and the unicity of the Catholic Church.

I think that I can not constantly comment in the media on the statements of the Pope or the Holy See. I have confessed the faith and given the faithful sufficient guidance. The Church is not in our hands and God must and will intervene. Christus vincit!

In an exclusive interview with LifeSiteNews, Anatolii Babynskyi, who studies the history of postwar Ukrainian Catholics, said Pope Francis does make statements that are “obscure” on occasion. As to the pope’s use of “uniatism,” Babynskyi said that there is a disparity between Catholic and Orthodox Christians in the term’s use.

The term “uniatism,” Babynskyi said, was invented by Fr. Cyril Korolevsky (1878–1959), an Eastern-rite Catholic priest who was the author of The Definition, Causes, Effects, Scope, Dangers and Remedies of Uniatism and other books about Eastern Christianity. According to Babynskyi, Korolevsky asserted at the beginning of the 20th century that Catholics of the Eastern rites had lost a significant part of their spiritual and theological heritage once they returned to sharing communion with the papacy.

However, at the beginning of the 20th century, things began to change. Eastern Catholics began to renew their spiritual and liturgical heritage, Babynskyi said. Later, the Second Vatican Council aided the process, he said, by proclaiming that the Catholic Church is neither Latin nor Eastern but a “unity in diversity: a unity of Eastern and Western churches. These churches should preserve their distinct liturgical traditions.” For Koralevski, “uniatism was a wrong understanding of unity.”

“Today, we have a healthier understanding of unity and that it does not mean uniformity,” he added.

“Regarding what Pope Francis said, I think that he speaks in a way that is a little bit obscure,” Babynskyi said. “But in testing his words within the broad context of the Catholic Church and its documents,” he added, “nothing sensational happened.” Eastern-rite Catholics like himself, Babynskyi said, “criticize uniatism but pray for unity. We distinguish between those terms.”

“I hope and believe that Pope Francis sees the distinction,” Babynskyi said.

As for the Pope’s comment that the current “status quo must be maintained,” Babynskyi interpreted him to mean that the Eastern Catholic Churches must be preserved, saying, “His words are clear.” The Catholic Church, Babynskyi said, is reaching out to the Orthodox to seek unity while trying to surmount the mistakes of the past that led to the current schism. The Orthodox, Babynskyi said, should heed Eastern Catholics in finding new ways of unity without permanent concentration on the mistakes of the past.

As to whether the pope’s comments might improve relations with the Orthodox, Babynskyi said some Orthodox may welcome the comment that appeared to condemn uniatism. Because there are different understandings as to the meaning of uniatism, he said he is not certain whether the pope’s comments may have advanced the cause of unity. In the past, the pope has called on Eastern Catholics to continue in dialogue with their Eastern Orthodox counterparts.

The discussion over unity of the East and West, Babynskyi said, is complicated by politics. Russia’s military incursions into Ukraine and the Russian government’s close relations with the Moscow patriarchate of the Russian Orthodox complicate relations between the various Orthodox churches and between the Orthodox and the Catholic Church. However, Babynskyi sees that a warming trend in relations between the East and West can be discerned in the recognition of the new Ukrainian Orthodox Church by the ecumenical patriarch of Istanbul, as well as in the warm reception Pope Francis received from the Romanian Orthodox during his visit.