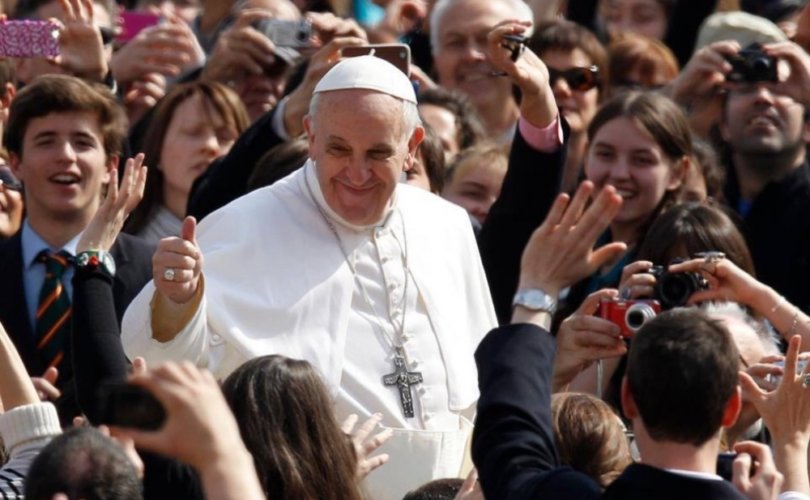 December 8, 2017 (LifeSiteNews) – Some of the most vocal supporters of Pope Francis’ agenda to change the Catholic Church are telling faithful Catholics to humbly submit to communion for adulterers as “papal magisterial teaching.” Their demand comes after the Vatican declared one of the Pope's most controversial documents on the subject is “authentic magisterium.”

But Catholic experts in various fields are counter-arguing that the Pope’s recent move may explicitly contradict the Sixth Commandment against adultery and the teaching of St. Paul on reception of Holy Communion. If so, they argue, then Catholics cannot assent to it.

“By saying that ‘there is no other interpretation’ [to guidelines that appear to blatantly approve Communion for adulterers], the pope is stating that he is (magisterially) proposing a doctrine which is contrary to the Sixth Commandment and to Saint Paul’s prohibition outlined in 1 Cor. 11:27-30,” said Dr. Luca Gili, a professor of philosophy at the University of Quebec in Montreal, to LifeSiteNews.

The Sixth Commandment given by God to Moses on Mount Sinai states, “Thou shalt not commit adultery.” The Catholic Church has always taught that adultery constitutes serious sin. The Catholic Church teaches that the faithful may receive Communion if they have the proper disposition, namely that they be in the state of grace and free from serious sin. Those in serious sin may not receive Communion until they confess their sin and receive absolution from a priest. The Church follows the teaching of St. Paul in this matter where he states that the one who “eats the bread or drinks the cup of the Lord in an unworthy manner will be guilty of profaning the body and blood of the Lord.”

Confusion exploded in the Catholic world last week as Pope Francis' elevated a controversial private letter of his to the status of an 'apostolic letter,' calling it “authentic Magisterium.” His September 5, 2016, private letter to the Argentine bishops affirmed their guidelines that were based on the Pope’s own Exhortation Amoris Laetitia. The guidelines seemingly approved communion for civilly-divorced-and-remarried Catholics living in adultery. The Pope said in his letter to the bishops that “there is no other interpretation.”

The controversial guidelines and the Pope’s private letter were both published in the Acta Apostolicae Sedis (AAS) along with a note saying that they were to be promulgated as “authentic Magisterium.”

Supporters of Pope Francis say that previous Church teaching on the matter has now been superseded by the Pope’s new teaching and that Catholics must simply accept the new teaching without question.

Villanova University theologian Massimo Faggioli said the pope’s teaching superseded Canon 915, suggesting that the Canon regarding worthiness to receive the Eucharist could possibly change in the future.

“I am very well aware of the very important role of Canon Law in the Church (see my lecture at CLSA convent. in Indianapolis),” he tweeted. “But I believe that for Catholics what the pope teaches is more relevant than what canon 915 says (says for now) about holy Communion #AmorisLaetitia.”

But an expert in the doctrine of papal infallibility speaking on the condition of anonymity told LifeSiteNews that when a pope’s teaching contradicts Divine Revelation and perennial Church teaching, Catholics are not obliged to comply with the contradictory teaching.

“In cases where a papal statement clearly deviates from Revelation and the constant teaching of the Tradition of the Church,” the expert told LifeSiteNews, “Catholics are not permitted to adhere to the novel teaching.”

Dr. Gili speculated that the Pope may be teaching heresy.

“Any denial of a divinely revealed truth is (material) heresy, according to the definition of heresy in CIC 751. In conclusion, the pope is (allegedly) teaching a plain heresy,” he said.

One Catholic theologian told LifeSiteNews under condition of anonymity that since the Catholic magisterium had already previously forbidden Communion to remarried Catholics living in adultery prior to Pope Francis, faithful Catholics cannot simply “just flick a switch in their minds” and give religious assent to a contradictory teaching.

Dr. Gili speculated that the Pope’s move may set the ground for persecution within the Church of Catholics who remain faithful to previous magisterial teaching on marriage and the sacraments.

“It is clear that the publication of the above mentioned two documents in the AAS has the explicit goal of establishing ‘legal’ grounds to censure and possibly expel from the church all faithful laymen, priests, and bishops who will not want to offer their ‘religious submission of the intellect and will’ to a heretical doctrine,” he said.