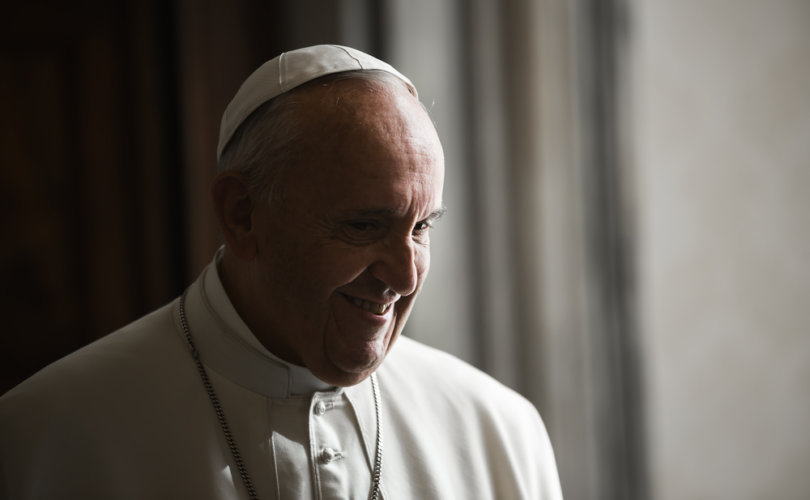 VATICAN CITY, December 18, 2020 (LifeSiteNews) – Pope Francis launched a new partnership between the Vatican and United Nations (UN) this week that aims at educating the world in “sustainable lifestyles,” “gender equality,” and “global citizenship,” among other goals.

The launch of the collaboration between the Pope’s own Global Pact for Education and the UN’s Mission 4.7 took place this week during the Vatican Youth Symposium. Amongst the speakers at the launch were pro-abortion globalists Jeffrey Sachs, the director general of UNESCO, and the former Secretary General of the U.N. Ban Ki-Moon, who were joined by Pope Francis. The symposium was co-hosted by the Pontifical Academy of Social Sciences (PASS) and the UN Sustainable Development Solutions Network (SDSN) / SDSN Youth.

The Symposium aims to bring about the “instilling” of the Sustainable Development Goals (SDGs), the Paris Climate Agreement, and the Pope’s encyclicals Fratelli Tutti and Laudato si. The Vatican’s Youth Symposium promotes the SDGs even though targets 3.7 and 5.6 include “sexual and reproductive health services,” what pro-life critics point out are euphemisms for abortion and contraception.

Its co-host, the SDSN, was founded by Ban Ki-Moon in 2012 and its donors include the pro-abortion, pro-LGBT Bill and Melinda Gates Foundation. Jeffrey Sachs, one of the moderators of the 2020 Vatican Symposium, is the president of the SDSN and an ardent proponent of abortion and population control.

Mission 4.7, itself launched at the Youth Symposium, is so styled due to its focus on SDG target 4.7 and has been established to “put into global practice this bold vision” of target 4.7. The point in question reads: “By 2030 ensure all learners acquire knowledge and skills needed to promote sustainable development, including among others through education for sustainable development and sustainable lifestyles, human rights, gender equality, promotion of a culture of peace and non-violence, global citizenship, and appreciation of cultural diversity and of culture’s contribution to sustainable development.”

Leading the group is pro-abortion and pro-LGBT Audrey Azoulay, the Director General of UNESCO, alongside Ban Ki-Moon, whilst the chancellor for the PASS and the Pontifical Academy of Sciences, Monsignor Marcelo Sánchez Sorondo, is one of the Co-Chairs.

In his official capacity in Mission 4.7, Mgr. Sorondo represents the Pope. LifeSiteNews co-founder John Henry Westen has previously written about Sorondo’s influence in the Vatican, highlighting his close relations with pro-abortion globalists, as well as his opposition to traditional, Catholic doctrine. Earlier this year, Sorondo defended his decision to give Holy Communion to the pro-abortion president of Argentina and his mistress during their recent visit to the Vatican, arguing against Canon Law in doing so.

Despite the pro-abortion connections of the various organizations and members involved, Pope Francis welcomed the collaboration. In a video message to the event, Francis said that the gathering was “an act of hope” which can promote a “new good climate of educational opportunities based on social justice and reciprocal love.” He praised the UN, saying that it offered “a unique opportunity for governments and civil society of the world to unite both in hope and in action for a new education.”

The Pope also alluded to the new style of fraternity which he called for in Fratelli Tutti, saying: “The Global Compact on Education and Mission 4.7 will work together for the civilisation of love, beauty and unity. Allow me to tell you that you are the poets of a new human beauty, a new fraternal and friendly beauty, as well as of the preservation of the earth we tread.”

Despite the SDG’s promotion of both contraception and abortion, the Pope expressed his “satisfaction” that governments have “recommitted themselves” to the UN’s agenda, through adopting the “2030 Agenda and the United Nations Sustainable Development Goals, in synergy with the Global Compact on Education.” He has previously noted how “gratified” he was that world nations adopted the SDG’s.

Speaking after the pontiff, Mgr Sorondo also highlighted his pleasure at being involved in the movement, “especially after this very important speech by the Pope, that recognizes the need to re-establish global and universal #education.”

Meanwhile Ban Ki-Moon declared that Mission 4.7 was “a vital initiative to advocate for all learners to acquire the values, knowledge, and skills to promote global citizenship& sustainable development.” Despite his own support for abortion and LGBT ideology, Ban Ki-Moon has been invited to the Vatican by the Pope a number of times, previously thanking the Pope for his role in promoting adherence to the pro-abortion 2030 Agenda for Sustainable Development and its SDG’s.

Deepening Vatican ties with the UN

Pope Francis has had a number of UN engagements in the last week. It was only last weekend that he called “for a change of direction,” pledging to reduce the Vatican to “zero” carbon emissions by 2050. Whilst failing to mention Jesus Christ, or anything remotely religious, in his appearance at the summit, the Pope chose to base his statements on “fraternity and the alliance between the human being and the environment.”

Furthermore, he promised that the “Holy See is committed to promoting education in integral ecology,” explaining that this means that “[p]olitical and technical measures must be united with an educational process that favors a cultural model of development and sustainability.”

Days before that, on December 8, he joined forces with major global corporations to promote a new “economic system” of capitalism based on the SDG’s. The new “Council for Inclusive Capitalism with the Vatican” is fundamentally committed to promote “environmental, social, and governance measures” in order to “achieve the United Nations Sustainable Development Goals.” The Council “challenges business and investment leaders of all sizes” to adopt its principles.

The Pope’s ever closer support and links with globalist corporations and leaders lends further credence to his alignment with the globalist call for a “Great Reset.” In 2019, he made a speech advocating for globalist world practices, calling for “globalization to be beneficial for all.” Referring to a “supranational common good,” the Pope added that “there is need for a special legally constituted authority capable of facilitating its implementation.”

At the beginning of December, Pope Francis then used the phrase “build back better,” the slogan that has become synonymous with globalist polices to “push the reset button” on the global economy. The phrase is also the name of Joe Biden’s website, BuildBackBetter.gov, on which he claims to be “restoring American leadership.”

Klaus Schwab, head of the World Economic Forum, is a prominent proponent of the Great Reset. He stated: “In short, we need a ‘Great Reset’ of capitalism.” Schwab has published a book titled “COVID-19: The Great Reset,” in which he outlines the “changes” necessary for a more “sustainable world going forward.”

LifeSiteNews’ John-Henry Westen has also noted that Pope Francis’ opinion piece published in The New York Times on Thanksgiving Day “echoed the sentiments of Joe Biden and other pushers of the so-called Great Reset, calling for the world to ‘build a better, different, human future’.”