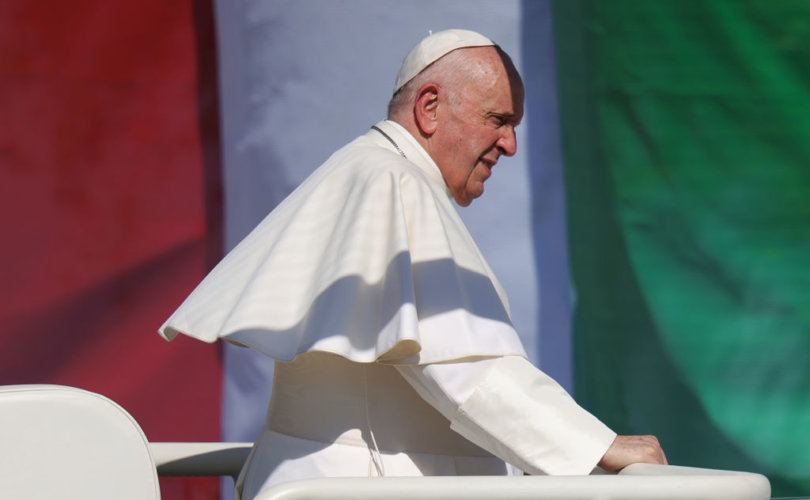 VATICAN CITY, (LifeSiteNews) — Pope Francis today told parents of children with “different sexual orientations” not to condemn them, urging them to instead “accompany” their children.

Delivering remarks at his Wednesday general audience focusing on the role of St. Joseph as a model parent, the pontiff said he was moved to consider “people who are crushed by the weight of life,” including “parents who see different sexual orientations in their children.”

Francis warned parents of LGBT kids to “not hide in an attitude of condemnation.”

“The pope’s unscripted remarks … offer yet another example of Francis’ delicate tightrope walk of affirming church teaching when it comes to homosexuality and trying to extend a warmer welcome to LGBTQ persons,” wrote the National Catholic Reporter.

However, what some may perceive to be a tightrope act, others see as yet more confusing messaging from this pontificate, which more often than not issues statements and engages in acts that challenge or defy rather than uphold Church teaching on complementarity and sexual behavior.

“Many of the statements Pope Francis has made are ambiguous, and therefore troubling — for they can be interpreted in both an orthodox and a heterodox manner,” observed Fr. Thomas Weinandy, O.F.M., Cap., in a 2019 First Things commentary.

“However, the fact that Pope Francis articulates these positions in an ambiguous manner makes it almost impossible to accuse him rightly of heresy,” said Weinandy.

The pope’s terse message advising parents to “accompany” rather than “condemn” LGBT kids could easily be interpreted as directing parents to ignore Church teaching while allowing only for the affirmation of homosexuality or transgenderism. His words overlook the possibility of parents lovingly directing their children to psychological or spiritual counseling rather than simply affirming their child’s proclaimed gay, lesbian, or trans identity.

The list of confusing — if not troubling and downright heretical — messages from Pope Francis regarding the Church’s teaching on homosexuality and transgenderism continues to grow.

Last month, Pope Francis wrote a letter to a Catholic nun who openly defies Church teaching on sexuality, praising her for her “50 years of ministry,” which has been mostly devoted to promoting the normalization of homosexuality within the Church.

His letter to Sister Jeannine Gramick, S.L., was just the latest in a series of letters congratulating religious men and women and others endeavoring to subvert Church teaching.

The Pope has even gone so far in one of his letters as to refer to a group of gender dysphoric males –– reported to be between 40 and 70 years old –– as “girls.”

In 2016, Pope Francis referred to a woman who had undergone a sex-change operation as a “man,” and also referred to her as having “married” another woman and admitted to later receiving them in the Vatican.

In 2018, the Pope told a homosexual who visited him at the Vatican “God made you gay.”

In 2013, the premier LGBT publication, The Advocate, named Pope Francis “Person of the Year,” for asking, “If someone is gay and seeks the Lord with goodwill, who am I to judge?”

Gays crawling out of the Church woodwork in Germany

Pope Francis’ advice to parents today came amid the airing of a controversial documentary in German public television in which over 100 Church employees, including priests, “came out”’ as LGBT.