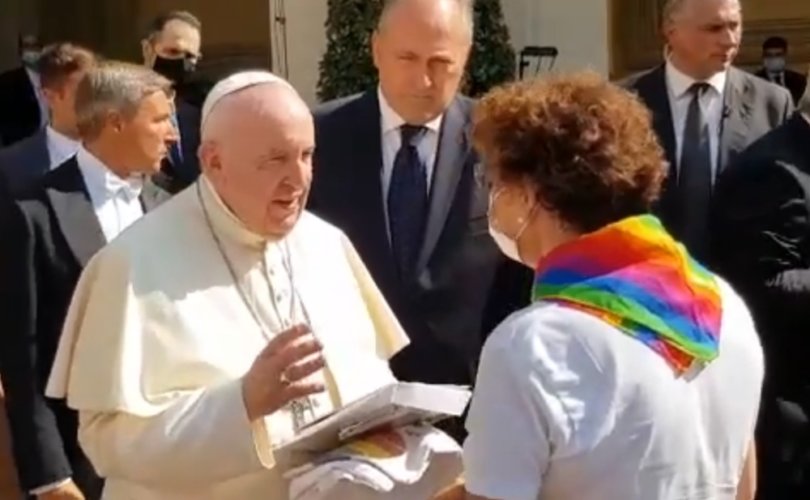 VATICAN CITY, September 18, 2020 (LifeSiteNews) — Pope Francis has again implicitly affirmed the notion that God purposefully makes people same-sex attracted and gender dysphoric, telling a group of Italian parents who affirm their children as LGBT that “God loves your children as they are.”

The Pope met with the group of 40 parents, members of Tenda di Gionata, “Jonathan’s Tent,” following a public audience, according to a report by America Magazine. Homosexual activists have long co-opted the Biblical story of the relationship of bosom friendship that existed between David and Jonathan to serve their homosexual agenda.

Mara Grassi, vice president of the Tenda di Gionata, told Pope Francis, “We wish to create a bridge to the church so that the church too can change its way of looking at our children, no longer excluding them but fully welcoming them.”

Pope Francis has repeatedly delivered mixed signals, often seeming to significantly depart from Church teaching regarding the pastoring of individuals afflicted with homosexuality and transgenderism.

Over the course of his pontificate, Pope Francis has given indications that he is not concerned with addressing homosexual activity according to Church teaching as inherently disordered and intrinsically evil.  Quite the contrary: Not long ago he signalled support for legal recognition of same-sex unions.  He has welcomed a former male student and his boyfriend to the Vatican’s U.S. Embassy. And a French priest said in a televised interview that Pope Francis approved of his blessing of homosexual couples.

The Advocate editor’s explanation of their choice reveals the consequences of Pope Francis’ words:

In 2017, the LGBT world applauded Pope Francis’ recruitment of fellow Jesuit, pro-LGBT Fr. James Martin, as a communications consultant to the Holy See’s Secretariat for Communications.  Martin has led the charge to normalize homosexuality and trangenderism within the Catholic Church virtually unhindered.

In 2018, a homosexual man who visited Pope Francis said the Pope told him, “God made you gay.” The allegation came from Juan Carlos Cruz, one of the child victims of sexual abuse by Chilean clergy.

The Jesuit Pontiff made a giant leap from his already confounding, impenetrable, “Who am I to judge?” suggesting to the world that the Church is treading down a path to justifying LGBT identity and activity as fully normal.

Such a path would be impossible for the Church of Christ.

The Vatican press office's Cristina Ravenda told LifeSiteNews at the time, “The Vatican does not comment on private conversations of the Pope.”  Pope Francis could have personally issued a correction to the story, but a correction never came.

Earlier this year, an “out” gay priest, Fr. James Alison, who rejects the Church’s teaching on homosexuality shared his personal reaction to a phone call he claims he received from Pope Francis in which the Pontiff reportedly affirmed him as a homosexual priest.

Last month, after a controversial nun opened a residence in Argentina for ‘trans women’ —men who choose to identify as women— Pope Francis praised her work, referring to the men as “girls.”

“Dear Monica, God who did not go to the seminary or study theology will repay you abundantly. I pray for you and your girls,” said the Pope, according to the nun, Sister Mónica Astorga Cremona.