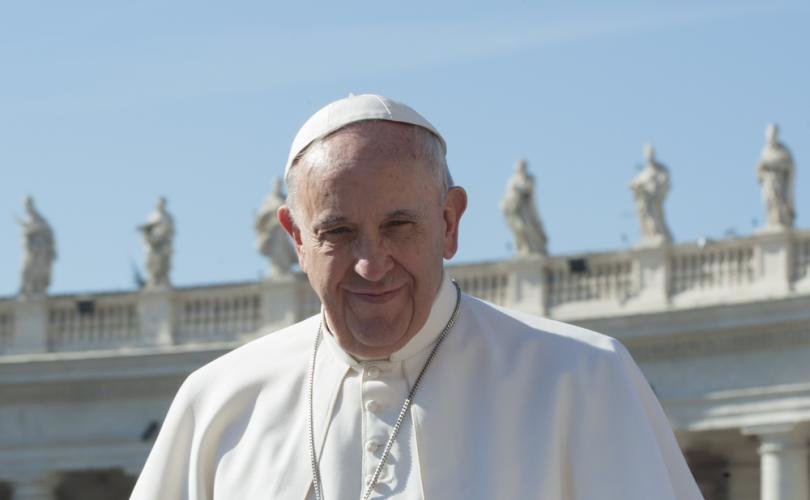 July 2, 2019 correction: An earlier version of this story suggested that Pope Francis was celebrating a Mass for activists involved in human trafficking. The Mass, however, will be celebrated in honor of those who accompany and welcome migrants and refugees. While the Italian press has referred to some of these migrant helpers as “traffickers,” they do not appear to be involved in the trade of humans for the purpose of forced labor or sexual slavery. LifeSiteNews regrets this error.

ROME, July 1, 2019 (LifeSiteNews) — Just a day after Italian authorities arrested the skipper of a ship taking illegal African migrants to Europe, the Vatican announced that Pope Francis will celebrate Mass at St. Peter’s Basilica for migrants and those who accompany and welcome them.

According to a release from Vatican press officer Alessandro Gisotti, Pope Francis will mark the fifth anniversary of his visit to Italy’s Lampedusa island, where authorities have received thousands of mostly African migrants who have been detained while crossing treacherous Mediterranean waters in fragile watercraft.

The statement from the Vatican said 250 “migrants, refugees and those who are committed to saving their lives” will be in the congregation for the Mass. The Pope is expecting the Mass on July 8 will “encourage those who strive, every day, to support, accompany and receive migrants and refugees.”

While the Mass will be celebrated at the high altar of the historic basilica, only those persons invited by the Vatican’s office on Migrants and Refugees of the Dicastery for the Service of Integral Human Development are to attend and to which accredited media are not invited.

The Mass will be transmitted live by Vatican Media, however. According to the release, Pope Francis wants the Mass to be in the service of contemplation and in recognition of those who have lost their lives fleeing war and misery while also encouraging those who serve them.

The Sea Watch 3 NGO flies a Dutch flag but is operated by a German nonprofit. It is one of several similar efforts by Europeans to ease the dangerous transit of the largely African migrants who cross the sea.

According to Italian daily Il Corriere Della Serra, Captain Rackete said, “I had to dock. I feared that some migrants might commit suicide.”

Claiming that some passengers tried to self-harm, Rackete said, “I was afraid. We were taking turns for days, even at night, out of fear that someone might throw themselves into the sea. For those who don’t know how to swim, it means suicide. I feared the worst.”

Rackete’s case has been greeted with a divided Europe. Some observers have accused Sea Watch and similar groups of engaging in human trafficking while others have offered praise for the group's charitable acts. On Saturday, Cardinal Pietro Parolin vehemently disagreed with the Italian government and its arrest of Racketa.

“I think that human life must be preserved in any way. This must be the North Star that guides us. Everything else is secondary,” said Cardinal Parolin, the Vatican’s Secretary of State, in a press conference.

Archbishop Gian Carlo Perego of Ferrara declared his support for Rackete, comparing her favorably with Giuseppe Garibaldi, a socialist who warred to bring down the Papal States in the 1800s and form modern Italy. “Disobeying the law to save lives is a Christian principle, and it’s fundamental from a human point of view. It’s what this woman captain has done.” He even proposed to rename the port of Lampedusa in honor of Rackete.

On Monday, a spokesman for the German foreign ministry demanded that Italy release Rackete, and France is also pleading for her release. Philanthropists have contributed more than $1 million for her legal defense. Rackete could face three to 10 years in prison and thousands in fines if convicted.

According to various reports, Pope Francis has refused to meet Deputy Minister Salvini because of the latter’s immigration policies. In April, L’Osservatore Romano — the Vatican’s official newspaper — said migrants who overpowered the crew of a rescue ship had become “hijackers by necessity,” thus giving evidence of the politicization of Church’s response to the migrant crisis. Pope Francis himself has been a critic of President Donald Trump’s reinforcement of border security, comparing it with the Berlin Wall that divided free West Germany from communist East Germany for decades.