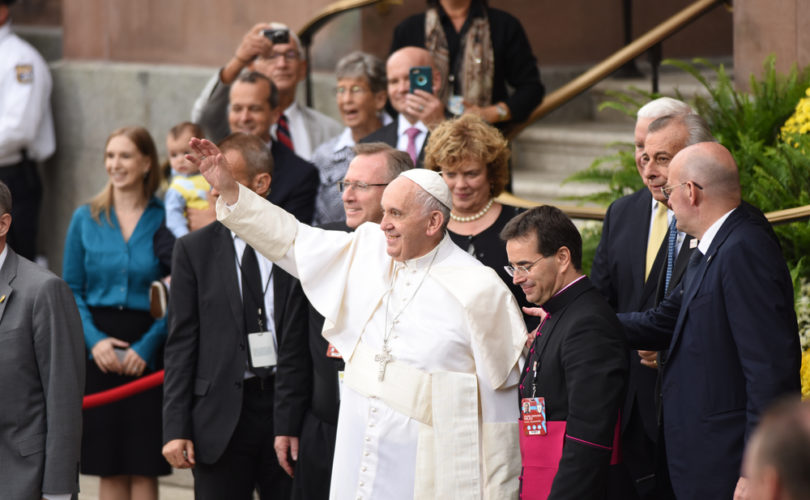 January 26, 2016 (LifeSiteNews) — Pope Francis will travel to Sweden this October to assist in the launch of a year-long commemoration of the 500th anniversary of Martin Luther’s nailing of his 95 theses to the door of the castle church of Wittenberg on October 31, 1517, officially launching the Protestant Reformation. Luther was excommunicated and his theses rejected by Pope Leo X in 1520. This split in Christianity was the second major break-off after the Orthodox split in the eleventh century.

The Vatican announced the event Monday. “The Holy See Press Office today announced that His Holiness Francis intends to participate in a joint ceremony of the Catholic Church and the World Lutheran Federation to commemorate the 500th anniversary of the Reformation, scheduled to take place in Lund, Sweden on Monday 31 October 2016,” reported Vatican Information Service.

The pope will travel to Lund Cathedral, seat of the bishop of Lund of the Lutheran Church of Sweden, and jointly lead a “common worship service” with Lutheran World Federation President Bishop Munib Younan and General Secretary Martin Junge. “While kicking off a year of events to mark the 500th anniversary of the Protestant Reformation, it will also highlight the important ecumenical developments that have taken place during the past 50 years of dialogue between Catholics and Lutherans,” Vatican Radio reports.

Since the announcement, many have expressed dismay, and some tradition-minded Catholics have strongly objected, over concern that the event could turn out as an instance of the “false irenicism” in ecumenical relations condemned by Vatican II, in seeming to downplay the grave doctrinal differences between the Catholic Church and Lutherans.

The way and method in which the Catholic faith is expressed should never become an obstacle to dialogue with our brethren. It is, of course, essential that the doctrine should be clearly presented in its entirety. Nothing is so foreign to the spirit of ecumenism as a false irenicism, in which the purity of Catholic doctrine suffers loss and its genuine and certain meaning is clouded.

The controversy is highlighted by a recent Vatican Radio report which carried the headline “Lutherans and Catholics on the way to full Christian unity” and used a photo of a Catholic Bishop Denis Madden standing next to female Lutheran Bishop Elizabeth Eaton.

The announcement of the pope’s trip to Sweden follows his visit on November 15, 2015 to a Lutheran church in Rome where he, to the surprise of many Catholics, told a Lutheran woman asking about receiving Communion with her Catholic husband “explanations and interpretations” of communion may differ between Catholics and Lutherans, but “life is bigger than explanations and interpretations.”  He said, “I wouldn’t ever dare to allow this, because it’s not my competence. One baptism, one Lord, one faith. Talk to the Lord and then go forward. I don’t dare to say anything more.”

One Vatican source described the pope’s comments as a “crossing the Rubicon moment.” The source said they were “mocking doctrine” and that they seemed to indicate the pope’s disagreement with the Church’s traditional teaching against intercommunion.

Days after the papal visit, the Vatican’s liturgy chief, Cardinal Robert Sarah, clarified that “Intercommunion is not permitted between Catholics and non-Catholics.” “You must confess the Catholic Faith. A non-Catholic cannot receive Communion. That is very, very clear. It’s not a matter of following your conscience,” he told Aleteia at that time.

However, in an interview a month later, the Lutheran pastor who had hosted the pope said he believed Francis had “opened the door” to intercommunion between Catholics and Lutherans and had begun a “revolution.” Then last week, priests at St. Peter’s Basilica gave Communion to a Lutheran delegation from Finland after the group had met with Pope Francis. The Lutheran bishop in the delegation, Samuel Salmi, says they had crossed their arms across their chest for a blessing, but the priests insisted on giving them Communion.

Pope Francis foretold the joint commemoration of the Reformation in 2014 when he received a delegation from the Evangelical Lutheran Church in Germany. “In 2017, Lutheran and Catholic Christians commemorate together the five hundredth anniversary of the Reformation,” he said. “On this occasion, Lutherans and Catholics will, for the first time, have the opportunity to keep one and the same global ecumenical commemoration, not in the form of a triumphalist celebration, but rather to confess our common faith in the Triune God.”