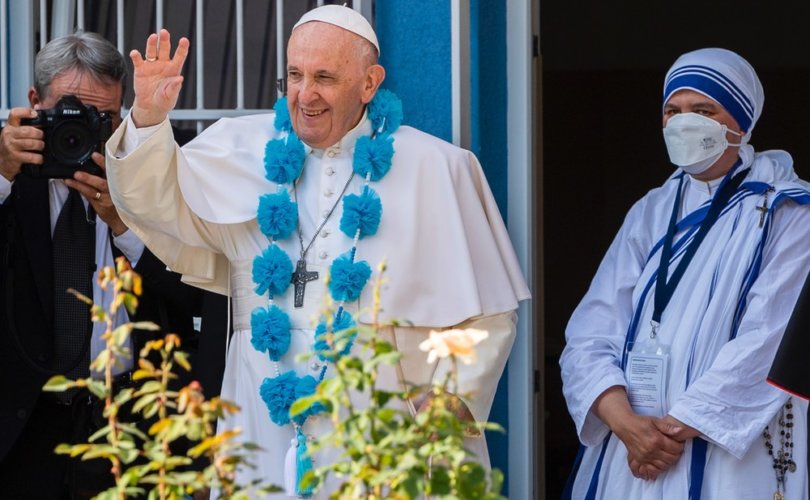 (LifeSiteNews) – During his July visit to Canada, Pope Francis is scheduled to partake in pagan ceremonies with Indigenous peoples.

According to Crux, Father Cristino Bouvette of the Archdiocese of Calgary plans for Pope Francis to participate in a pagan “smudging” ceremony and pray facing all four directions, according to Indigenous traditions.

During the Pope’s visit to Sacred Heart Church of the First Peoples, an elder will process into the church holding a bowl of smoldering cedar, sage, sweetgrass, and tobacco to reportedly purify the church.

“The smudge that is being proposed at Sacred Heart holds a two-fold purpose: 1) To show recognition of the ritual in an observable/public way; and 2) As a ritual of purification in the space itself as a gesture of making the space ‘more hospitable’ to welcome the Holy Father as he arrives,” Bouvette wrote in an email to Crux.

Bouvette acknowledged that “smudging” is not a Catholic tradition but maintained that it is “certainly not contrary to it.”

“For Indigenous Catholics to see the Holy Father welcomed to some place like Sacred Heart Church by having smudged the space first, or facing the four directions to offer his blessing — as simple as those gestures may seem — clearly demonstrates a sensitivity on his part to their traditions which, though outside of any particular Catholic expression of faith, are certainly not contrary to it,” he wrote to Crux.

“Certain ‘pagan’ practices would be ‘sacrilegious’ because they either make a mockery of our faith or dangerously open one up to the spiritual order where one has no control over what enters or attaches,” he admitted. “There are a variety of Indigenous rituals such as this which I have intentionally left off the table from the beginning.”

“In a Catholic context, we could see the ritual of smudging as being akin to the use of certain of our sacramentals which are borne for personal, spiritual purposes, such as wearing the scapular or anointing with the oil of St. Joseph’s Oratory,” he added.

The cedar, sage, sweetgrass, and tobacco are “gifts of the Creator and therefore returned back to the Creator,” he claimed.

“Personal purification or the purification of the space where the smudge is happening are the exclusive purposes of the ritual,” he said, without explaining what people were being purified from or how burning herbs could spiritually purify a person.

“Usually, the person doing the smudging would use a feather or branch to direct the smoke toward participants who use their hands to welcome it as a sign of their desire to cleanse their minds and hearts. However, Bouvette said, at Sacred Heart the elder will smudge the church itself but will not direct the smoke toward the pope,” Crux reported.

In addition to being an Indigenous tradition, the “smudging” ceremony is practiced in witchcraft and wicca.

According to Bouvette, Pope Francis might also pray facing all four directions, which is another Indigenous practice.

“We do not pray ‘to’ the four directions — we pray only to God, the creator,” he clarified, arguing the movement is “similar to the ancient Christian appreciation of directional orientation — like facing East at the altar as we await the second coming of Christ or facing north to proclaim the Gospel in the direction of darkness where the light of the sun does not pass.”

However, the Indigenous tradition is not to pray facing all four directions but rather to pray to each direction, honoring them as deities or gods in themselves.

Bouvette further justified his claim saying that praying in all directions “serves as a reminder of the omnipresence of the Creator and that all creation belongs to him.”

“Each direction is also aligned with the stages of human life: infants and children to the east; adolescents and young adults to the south; parents and middle-aged to the west; and our elders to the north,” he added.

“In addition to recognizing the dignity of all human life, it also demonstrates a humble submission to the passage of time, following the direction of the sun in the sky, to which we all must submit ourselves if we seek to live in harmony and peace,” Bouvette claimed.

This is not the first time that Francis will have partaken in pagan practices. During the 2019 Amazonian Synod, the pope participated in a ceremony in which Pachamama statues were venerated. Pachamama, whose name literally means “Mother Earth,” is the pagan goddess of fertility who demands child sacrifice. Her cult is still practiced within the Andes of South America,

The idolatry took place in the Vatican Gardens in the presence of Pope Francis during a tree-planting ceremony, in which pagan shamans led participants in a dance around a Pachamama statue, then offered incense, knelt, and bowed down to the ground in homage.

The statue was subsequently carried in procession during a public prayer of the Stations of the Cross in Rome, was given a place of prominence in the official conference hall for the Synod Fathers, and copies were placed on the altars of Santa Maria in Transpontina.

Additionally, in Laudato Si, Francis purported a new environmental paganism by introducing a new category of “sins against the earth” to be introduced into moral theology.

Such “sins” in turn give rise to an apparent need for “environmental conversion” and “reparation to the earth.” Critics say these at best are pious euphemisms for accepting the climate-change propaganda of globalists who include in their abortion and population control agenda; at worst they are an outright pagan divinization of nature.

Pope Francis said in his interview with Télam that Laudato Si was planned to be written for the Paris climate conference, claiming “nature is paying us back” for “slapping” it.

The Pope has described his upcoming visit to Canada as a “penitential pilgrimage.” His recent meetings with Indigenous leaders have been focused primarily around the Church’s involvement in Canada’s nation-wide residential school system in the 19th and 20th centuries, which saw indigenous children unjustly removed from their families, and taken to the schools for the supposed purpose of education and assimilation into the non-indigenous culture.

The schools were largely run by the Catholic Church, although by no means were they exclusively under Catholic care only, as other Christian denominations also ran some of the schools.

The seized children were prevented from speaking their native tongue or from engaging in their cultural practices from home.

Catholic author Michael O’Brien, who attended residential schools and presented testimony to the Truth and Reconciliation Commission, previously told LifeSiteNews that the chief underlying issue in the residential school saga was the institutional abuse of children by removing them from their families by the state authorities and then taken to the schools, noting the “long-term psychological and social effects of this.”

In May 2021, media outlets began publishing stories about the alleged discovery of unmarked graves at the former schools. However, more recent investigations in January 2022 found that despite the allegations of “physical genocide” on the part of the Church, no graves have actually been found.

Accusations of murder and genocide have been levied against the Church over its role in the residential schools, particularly since start of the May 2021 media coverage of the alleged unmarked graves. A series of church burnings began across Canada in an apparent attack of retaliation on the Catholic Church. At least five of the vandalized or burned churches were Catholic churches that specifically belong to First Nations communities.

Pope Francis plans to “meet individually with delegations of Canadian indigenous peoples, accompanied by their Bishops, to listen to their testimonies.”