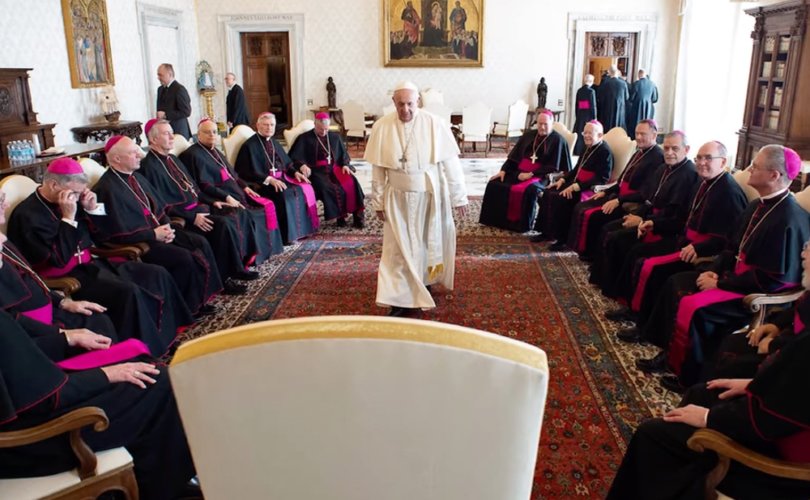 VATICAN CITY, February 3, 2020 (LifeSiteNews) — A U.S. archbishop says Pope Francis told a group of American bishops in Rome that civil unions for homosexual couples that give them access to public benefits are “acceptable,” as long as it’s clear such arrangements can never be considered marriage.

Archbishop Salvatore Cordileone of San Francisco told LifeSiteNews that during their January 27 ad limina visit, the pope said, in the words of the archbishop, that “civil unions between two people of the same sex can never be marriage.  As long as this is respected, civil unions that give access to government benefits can be acceptable.”

However, to regard homosexual civil unions as acceptable contradicts Catholic teaching, notably reaffirmed in the 1986, 1992 and 2003 documents issued by the Congregation for the Doctrine of the Faith (CDF) under Cardinal Josef Ratzinger, now Pope Emeritus Benedict XVI, and approved by Pope Saint John Paul II.

The 2003 letter “Considerations regarding proposals to give legal recognition to unions between homosexual persons” reiterates that homosexual acts go against the natural moral law and that “[t]here are absolutely no grounds for considering homosexual unions to be in any way similar or even remotely analogous to God's plan for marriage and family.”

“The Church teaches that respect for homosexual persons cannot lead in any way to approval of homosexual behaviour or to legal recognition of homosexual unions,” it points out.

Moreover, where “homosexual unions have been legally recognized or have been given the legal status and rights belonging to marriage, clear and emphatic opposition is a duty,” the document asserts.

“One must refrain from any kind of formal cooperation in the enactment or application of such gravely unjust laws and, as far as possible, from material cooperation on the level of their application. In this area, everyone can exercise the right to conscientious objection,” it states.

This is not the first time that the pontiff, while reaffirming the impossibility of homosexual “marriage,” has signaled support for “civil unions” for homosexual couples.

In a 2017 book-length interview with French journalist Dominique Wolton titled Politics and Society, Pope Francis stated: “Let us call things by their names. Matrimony is between a man and a woman. This is the precise term. Let us call the same-sex union a ‘civil union’.”

In reporting on the American bishops’ meeting with the Pope last week, Catholic News Service (CNS) mentioned that the Holy Father spoke about pastoral care for homosexuals. It quoted Archbishop Cordileone regarding what Pope Francis had said about homosexuals, at one point paraphrasing the Archbishop inaccurately.

“He made important distinctions between the (sexual) orientation and the question of marriage,” for example saying it was important to ensure gay couples have access to public benefits, but insisting gay couples cannot marry, the Archbishop said.

Cordileone clarified in a statement to LifeSiteNews that the pope did not talk about it being important to “ensure” homosexual couples have public benefits during the discussions.

Pope Francis “did not ‘endorse’ this,” said the Archbishop.