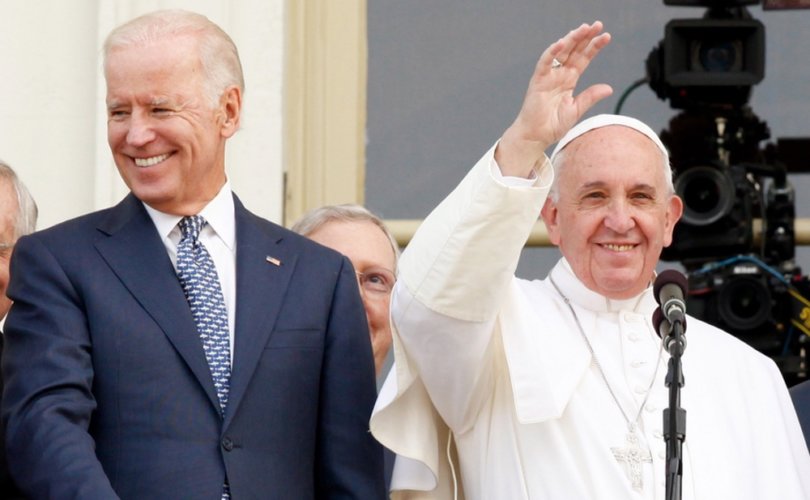 Pope Francis waves to crowd from the balcony of the US Capitol building after his address to a joint meeting of the U.S. Congress. U.S. Vice President Joe Biden looks on. September 24, 2015 in Washington, D.C.Evy Mages/Getty Images

VATICAN CITY, December 3, 2020 (LifeSiteNews) — The leader of the Catholic Church quoted today in a tweet words that are central to Joe Biden’s plan to remake America in the wake of the COVID-19 pandemic.

“To help our society to ‘build back better’, inclusion of the vulnerable must also entail efforts to promote their active participation,” tweeted the Pope on Dec. 3, linking to a message he gave for the International Day of Persons with Disabilities, an annual observance instituted by the United Nations several decades ago.

To help our society to “build back better”, inclusion of the vulnerable must also entail efforts to promote their active participation. #IDPD https://t.co/JIIJgNx76E

In his Dec. 3 message, Pope Francis said he finds the expression “building back better” quite striking, noting that the theme for this year’s celebration is “Building Back Better: Toward a Disability-inclusive, Accessible and Sustainable post-COVID-19 World.”

While the theme of the “International Day of Persons with Disabilities” is “Building Back Better,” the Pope’s tweet of the theme dropped the gerund on “building,” making the quote in the tweet identical to the slogan of Biden’s campaign platform.

Last week, Biden launched his BuildBackBetter.gov website hosted on a U.S. government server. Previously, the U.S. General Services Administration (GSA) had formally notified Biden that he would now be receiving transition funds. Part of the package includes receiving a government domain for a transition website. Biden pointed his followers to it with a simple tweet on Nov. 23.

“The website lists Biden’s priorities as curbing COVID-19 (including urging state and local authorities to force mask-wearing in their jurisdictions), economic recovery (with little in the way of specifics), racial equality (including the creation of a “national police oversight commission”), and climate change (primarily via a dramatic increase in government spending),” LifeSite’s Calvin Freiburger reported.

LifeSite’s Patrick Delaney has noted in a Nov. 2 report how Biden’s campaign plans align with a radical international socialist plan called “The Great Reset.” Globalist elites have characterized the “Great Reset” as a plan to ‘push the reset button’ on the global economy.

“Every country, from the United States to China, must participate [in the Great Reset], and every industry, from oil and gas to tech, must be transformed. In short, we need a ‘Great Reset’ of capitalism,” wrote Klaus Schwab, the head of the World Economic Forum (WEF), in a June 3, 2020 article published on WEF’s website.

Such a “reset means a revolution: a deep transformation of all that is done, thought, or believed — making a clean break with the past,” wrote LifeSite’s Jeanne Smits.

Justin Haskins of the Heartland Institute recently observed that Biden’s “Build Back Better” plan “comes straight from the Great Reset’s playbook,” and will even use the same terminology.

“It can’t be a coincidence that Biden is now using that exact language while calling for nearly identical policies. Biden is clearly taking his cues from the World Economic Forum and other supporters of the Great Reset,” he wrote in a July 23 article published on Fox Business.

LifeSite’s John-Henry Westen noted that Pope Francis’s opinion piece published in the New York Times on Thanksgiving Day “echoed the sentiments of Joe Biden and other pushers of the so-called Great Reset, calling for the world to ‘build a better, different, human future.’”

Earlier this month, Biden related how he and the Pope had talked on the phone after the presidential election and how the Holy Father had extended “blessings and congratulations.”

In a short press statement released on the Biden-Harris transition website, Biden “thanked His Holiness for extending blessings and congratulations and noted his appreciation for His Holiness’ leadership in promoting peace, reconciliation, and the common bonds of humanity around the world.”

In his address to persons with disabilities today, the Pope reaffirmed the “right of persons with disabilities to receive the sacraments” but failed to mention the right of such persons to be born. In Iceland, every baby diagnosed with the disability of Down syndrome is aborted, and the majority of unborn babies with Down syndrome are targeted for abortion in various other parts of the world.

“Iceland is not alone in its aspirations to create a “Down syndrome-free” world,” wrote Lauren Bell in a 2017 report. “The holocaust of Down syndrome babies is a global epidemic, taking the lives of human beings created in the image of God on the basis of a prenatal diagnosis indicating Down syndrome,” she added.