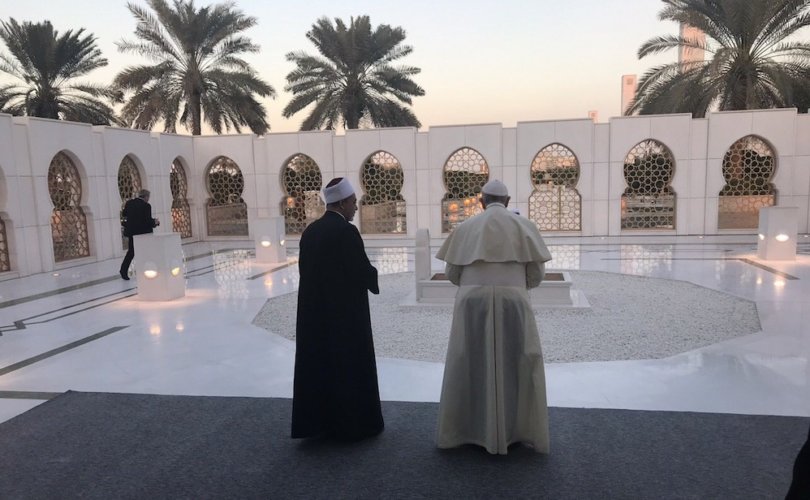 ROME, February 5, 2019 (LifeSiteNews) — Pope Francis has incited further controversy by signing a joint statement with a Grand Imam, saying that a “pluralism and diversity” of religions is “willed by God.”

The Pope signed the “Document on Human Fraternity for World Peace and Living Together,” with Ahmad el-Tayeb, Grand Imam of Egypt’s al-Azhar Mosque, during an interreligious meeting in Abu Dhabi on Monday.

The Feb. 4 event was part of Pope Francis’s three-day apostolic visit to the United Arab Emirates. The historic journey marked the first time a Roman Pontiff has visited the Arabian Peninsula, and was intended to promote interreligious dialogue and support the country’s considerable Catholic minority.

The document on Human Fraternity invites “all persons who have faith in God and faith in human fraternity to unite and work together so that it may serve as a guide for future generations to advance a culture of mutual respect in the awareness of the great divine grace that makes all human beings brothers and sisters.”

Freedom is a right of every person: each individual enjoys the freedom of belief, thought, expression and action. The pluralism and the diversity of religions, colour, sex, race and language are willed by God in His wisdom, through which He created human beings. This divine wisdom is the source from which the right to freedom of belief and the freedom to be different derives. Therefore, the fact that people are forced to adhere to a certain religion or culture must be rejected, as too the imposition of a cultural way of life that others do not accept.

In a Feb. 5 article in the Catholic Herald, Dr. Chad Pecknold, associate professor of systematic theology at Catholic University of America in Washington, D.C., sought to downplay the controversial passage, saying it must be read in its proper context and perspective.

“The idea that God wills the diversity of color, sex, race and language is easily understood, but some may find it puzzling to hear the Vicar of Christ talk about God willing the diversity of religions,” he said.

Pecknold acknowledged that the passage “is puzzling and potentially problematic.” But he maintained that, in the context of the document, “the Holy Father is clearly referring not to the evil of many false religions, but positively refers to the diversity of religions only in the sense that they are evidence of our natural desire to know God.”

“God wills that all men come to know Him through the free choice of their will, and so it follows that a diversity of religions can be spoken about as permissively willed by God without denying the supernatural good of one true religion,” Pecknold added.

Fr. Z also weighed in on his blog, saying “we must seek a way to understand this without it sounding like heresy.” He argued that if we read the passage to mean there are a multiplicity of religons “by God’s permissive will,” the statement is “acceptable.”

But in comments today to LifeSite, a Dominican theologian who wished to remain anonymous said the controversial passage “in its obvious sense is false, and in fact heretical.”

“The various religions say incompatible things about who God is and how He wants to be worshipped. Therefore they cannot all be true. Therefore God, who is truth, cannot will all religions,” he explained.

Responding to those who are defending the Pope’s statement by invoking God’s “permissive will,” the Dominican theologian said:

God permits non-Catholic religions to exist; but permitting something is not a way of willing it, it is a way of not willing to prevent it. Thus God permits many innocent people to be killed, but He does not will it. We would not talk about God’s permissive will for Jews to be gassed, for example.

The Dominican said he found Dr. Pecknold’s reading of the text “a strained and unnatural interpretation.”

“You might as well say that someone who said that gassing Jews was good only meant that it is good that we have the chemical and physiological knowledge that makes it possible,” he argued.

He said “the problem with Fr Z’s interpretation is the reference to religions comes in a list of other things that God does will (and doesn’t simply permit), such as sexes, colors and races.”

The Dominican theologian went one step further and pointed out another equally problematic, yet overlooked, statement in the document on Human Fraternity — this time on faith.

The opening paragraph of the document reads:

Faith leads a believer to see in the other a brother or sister to be supported and loved. Through faith in God, who has created the universe, creatures and all human beings (equal on account of his mercy), believers are called to express this human fraternity by safeguarding creation and the entire universe and supporting all persons, especially the poorest and those most in need.

“It is contrary to the Church’s way of speaking to use the phrase ‘faith in God’ to mean ‘affirming that God exists,’ or ‘believing in any kind of alleged revelation, even a non-Christian one,” the Dominican theologian explained.

“Faith,” he said, “is the virtue through which God moves us to assent to what He has revealed through the Old Testament prophets and the New Testament apostles, and most of all through His Son.”

“People who believe in non-Christian religions therefore do not do so by faith, as the declaration Dominus Iesus 7 points out, but by some kind of human opinion.”

Dominus Iesus was issued by the Congregation for the Doctrine of the Faith in 2000, under then prefect Cardinal Josef Ratzinger. It reaffirmed the Church’s teaching that salvation is only found in Jesus Christ and the Church. Paragraph 7 of the document reads:

The distinction between theological faith and belief in the other religions, must be firmly held. If faith is the acceptance in grace of revealed truth, which ‘makes it possible to penetrate the mystery in a way that allows us to understand it coherently,’ then belief, in the other religions, is that sum of experience and thought that constitutes the human treasury of wisdom and religious aspiration, which man in his search for truth has conceived and acted upon in his relationship to God and the Absolute (Dominus Iesus, 7).

As previously discussed here on LifeSite, Vatican II allows for the possibility of extraordinary revelations to non-Christians. According to its decree on the missionary activity of the Church, “God in ways known to Himself can lead those inculpably ignorant of the Gospel to find that faith without which it is impossible to please Him” (Ad Gentes, 7).

But the Church is equally clear that the followers of other religions do not have the faith without which it is impossible to please God.

In other words, God can lead the inculpably ignorant through mysterious means to the true faith, but adherence to Islam or any other non-Christian religion cannot constitute this faith.