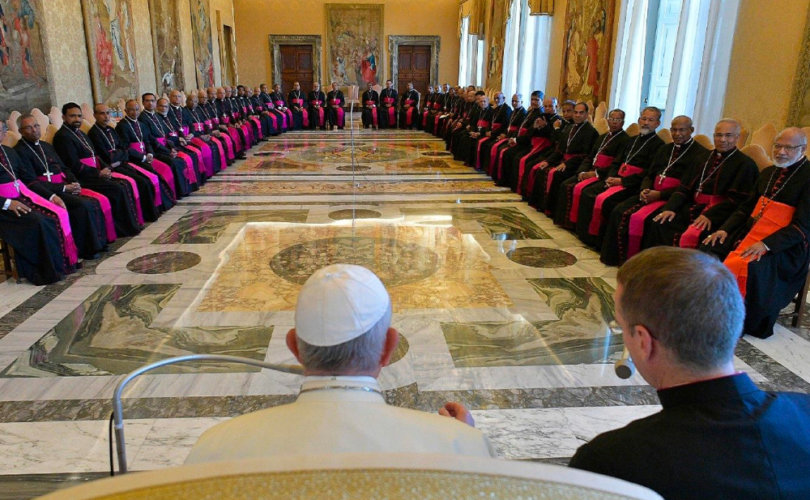 Pope Francis receives the bishops of the Episcopal Conference of the Syro-Malabar Church during their ad Limina visit to the Vatican in October 2019.Vatican News screenshot

On March 25, Pope Francis wrote to the archdiocese, or Archeparchy, asking that it obey a 2021 decision made by the Synod of Bishops of the Syro-Malabar Archiepiscopal Church with regard to implementing a uniform liturgical decision on the direction in which the priest must say Mass. The Synod had repeated its 1999 ruling that priests must face the people and the altar at different times in the Mass, following a decades-long dispute.

A sizable number of priests in the Archeparchy of Ernakulam-Angamaly – in southern India – objected to the Synod’s ruling, demanding they be allowed to continue saying Mass only facing the people, and not the altar at all.

While 34 Eparchies had “decided to enact the synodal decision,” Francis noted that “regrettably, this was not the case” in the Archeparchy of Ernakulam-Angamaly, which “chose instead to continue following your particular liturgical form, albeit after careful reflection, in isolation from the rest of the Syro-Malabar Church.”

For many decades, a liturgical dispute has been ongoing within the Syro-Malabar rite. “From time immemorial, the Church of St. Thomas Christians and later, its continuation as the Syro-Malabar Church in the Catholic communion, celebrated the Eucharistic Liturgy ad orientem (facing the East/altar) as the Western Latin Rite also did,” Mar Joseph Srampickal, the first bishop of the Syro-Malabar Eparchy of Great Britain, told Catholic News Agency in late 2021.

Mar Srampickal noted that after the liturgical upheaval of Vatican II, which saw many in the Latin Rite offer Mass facing the congregation, some of the Syro-Malabar eparchies followed suit, but did so “without any proper discussions or deliberations with other eparchies.”

One eparchy prominently argued for the more ancient Syriac tradition, celebrating Mass facing the altar to be kept, which led to further debates among the divided eparchies.

After Pope John Paul II’s 1986 restoration of the original form of the Syro-Malabar liturgy, the Holy Qurbana, the liturgy continued to be celebrated both ad orientem and ad populum (facing the people). Then in 1992, the Church was then raised to being a major archiepiscopate, thus setting up a Synod of Bishops.

In 1999, the Synod achieved what was described as a “breakthrough” in the liturgy wars, ruling that the priest would face the people until the Eucharistic prayer, after which he would face the altar until Communion. From the Communion to the end of Mass, he would once more face the congregation.

This was viewed as a compromise between the “conservative dioceses” who solely faced the altar, and those eparchies who solely faced the people, along with a third group of priests who faced both interchangeably. Priests on all sides of the liturgical divide doubted the successful implementation of the new rules.

One cleric, who saw no theological argument for saying Mass in either direction, spoke of the liturgical and personal clash between “progressive and conservative” bishops.

Papal intervention from Francis after rejection of Synodal decision

In July 2021, Pope Francis signed a letter to the entire Syro-Malabar Church, exhorting them to “proceed to a prompt implementation of the uniform mode of celebrating the Holy Qurbana, for the greater good and unity of your Church.”

Referencing “harmony, fraternity and unity,” Francis further urged adherence to the “Synodal decision.” This letter came only weeks before an August 2021 Synod of the Syro-Malabar hierarchy, which voted to confirm the 1999 decision and to implement it across the Church on November 28, 2021, ending the change by April 17, 2022.

However, Archbishop Antony Kariyil, the metropolitan vicar of Ernakulam-Angamaly, granted his clergy a dispensation following the Synod’s decision, after hundreds of priest objected, and a number of clergy conducted hunger strikes and public protests, demanding that they be allowed to continue saying Mass facing the people.

Fr. Paul Thelakat, a priest of the Archeparchy opposing the Synodal decision, referred to Francis’ personal love of Synodality while defending his own rejection of the liturgical directive: “Synodality is not just listening to the members of the Synod, but talking and listening, which is a continuous process.”

“The Eucharistic celebration is a dialogical language that must take into account different needs,” he said. “When you talk, you don’t show your back to people.”

Take the ‘difficult and painful step’

In the face of this continued discord over the liturgy, Francis wrote in March 2022, (with the letter publicized April 1) urging the Archeparchy’s clergy to “take a difficult and painful step” and adhere to the 2021 Synod, which affirmed the 1999 decision. “We cannot live divided. We cannot create division. We cannot allow ourselves to be a source of scandal,” Francis stated.

The Pontiff allowed time for a “dispensation” from the ruling, but noted it would only be temporary.

In response, priests in the Archeparchy declared that they will appeal to the Pope once again, and a stated that the Archeparchy would take a “formal stand on the Pope’s letter after discussing it in the presbyterial council meeting.”

LifeSiteNews contacted the Archeparchy of Ernakulam-Angamaly and Mar Srampickal for comment on the matter but was unable to reach a spokesman.