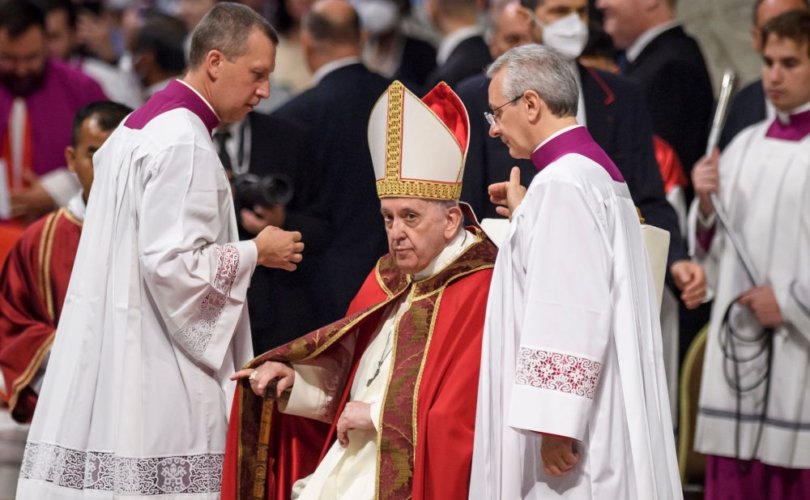 Pope Francis leads the Mass for the Solemnity of Saints Peter and Paul at Vatican Basilica on June 29, 2022 in Vatican City, Vatican.Photo by Antonio Masiello/Getty Images

VATICAN CITY (LifeSiteNews) — Pope Francis urged young people to generate new social and political ideas, “make noise” to be heard, and eat less meat to “help save the environment” in a July 6 letter addressed to the participants in the European Union’s 2022 Youth Conference.

“I would like to tell you something that is very close to my heart,” the Holy Father wrote in the beginning of the letter, in which he invited young Europeans to “transform the ‘old continent’ into a ‘new continent.’”

“I know that your generation has some good cards to play: you are attentive young people, less ideologized, accustomed to studying in other European countries, open to volunteering and sensitive to environmental issues,” Pope Francis wrote. “This is why I feel there is hope.”

Pope Francis urged European youth this week to eat less meat as a means of curbing global warming and preserving the planet. https://t.co/XWJfgZPtBu

Urging his audience to “be open to acceptance, and hence to the value of inclusion,” the pontiff went on to encourage young people to “shout” and “make noise” if their concerns aren’t heard by older people in authority, and suggested “it is legitimate to rebel” with regard to the ongoing war between Russia and Ukraine.

In addition, the Catholic Church’s top authority promoted his political hobby-horse of leftist environmental justice, warning young Europeans of the “urgent need to reduce the consumption not only of fossil fuels but also of so many superfluous things.”

“In certain areas of the world, too, it would be appropriate to consume less meat: this too can help save the environment,” he wrote.

Leftist climate idealogues have amped up calls in recent years for transitions away from traditional fuel and protein sources, urging shifts to “clean energy” and synthetic meat, and even food made of crickets and other insects.

For his part, Pope Francis has made leftist environmental justice a key component of his papacy. Earlier this year, he went so far as to condemn the “sin” of “not taking care of climate” as a “form of paganism,” and echoed radical leftist climate doomsday predictions by suggesting that “If things go on as they are now, our children will no longer be able to live on our planet.”

In a 2020 TED Talk, the pope had claimed there were only “30 years” left to prevent “catastrophic climate change.”

READ: Pope Francis says not taking care of the ‘climate’ is a ‘form of paganism’

The pope’s July 6 letter concluded with an exhortation to young people to keep a “broad outlook” and “be generative.”

“Walk with your feet firmly planted on the earth, but with a broad gaze, open to the horizon, open to the sky,” Pope Francis wrote.

“Young people capable of generating new ideas, new visions of the world, of the economy, of politics, of social coexistence, but above all of new paths to be traveled together,” he said.