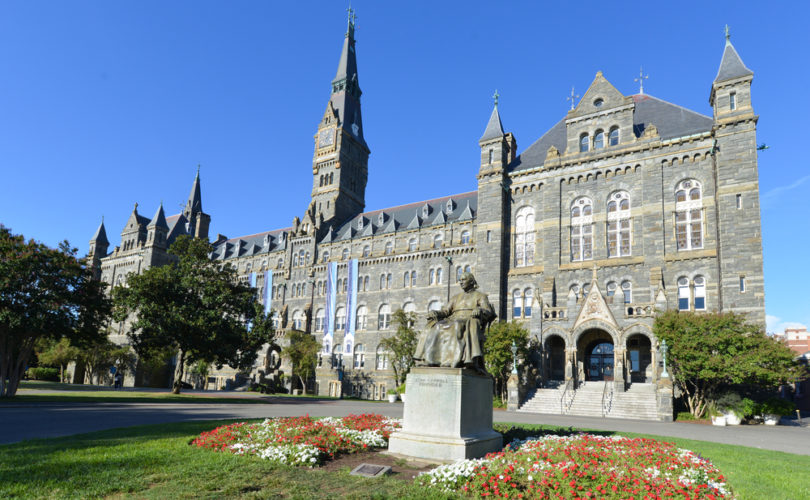 November 18, 2015 (CardinalNewmanSociety) — In an address to U.S. bishops gathered in Baltimore this week, Apostolic Nuncio to the United States Archbishop Carlo Maria Viganò called on all Jesuits and their respective schools to show “respect to their great tradition” and take the lead in “re-affirming the Catholic identity of their educational institutions.”

“The Society of Jesus has had a long and proud tradition of imparting a rich Catholic faith and a deep love for Christ, which in great part is carried on through their mission of education,” Archbishop Viganò said in his opening address to the U.S. Conference of Catholic Bishops (USCCB) general assembly. “It is my hope that, with respect to their great tradition, after the example of our Holy Father, they [the Jesuits] would take again the lead in re-affirming the Catholic identity of their educational institutions.”

Archbishop Viganò said these educational leaders need to “regain firm command of the helm of their institutions through the storms of the present times,” noting that their actions “must always be set by Christ, never allowing influence and wealth to dictate what might be an improper orientation for a Catholic school or university.”

The archbishop specifically mentioned the founding of Georgetown University in his address, saying that Jesuits there were “meant to build up and preserve genuine Catholic teaching to be infused into the culture of America’s young society.”

But Georgetown has faced numerous concerns over the years about the strength of the University’s Catholic identity. In recent months, the University was linked to Planned Parenthood in a Cardinal Newman Society investigative report, honored abortion advocates, including President Obama, and continues to promote and celebrate LGBTQ events and agendas on campus.

In May 2014, Archbishop Angelo Vincenzo Zani, secretary of the Vatican Congregation for Catholic Education, responded to a formal canonl aw petition which called into question the University’s Catholic identity. According to Archbishop Zani, the 116-page dossier detailing the numerous scandals at Georgetown presented “well-founded complaint[s]” which the Congregation was taking very seriously.

Many of the instances of Catholic identity abuse reported by the Newman Society over the years show a steady trend of Jesuit colleges mired in controversy, including Georgetown, Boston College, Fordham University, Gonzaga University, Marquette University and the University of San Francisco, among others.

Archbishop Viganò, who was educated by Jesuits in Milan and again at the Gregorian University in Rome, explained that when the Church was first taking root in the U.S., “the bishops decided on a strategy that would shape the growth and development of the Catholic Church. The main tool of this strategy was education.”

Catholic dioceses and parishes, each with their own particular school, soon sprang up throughout the United States. “These schools became fortresses of solid Catholic formation for all those young people who would take their place in America’s future.”

“Education was primary in the Bishops’ minds; it was an essential means for the Gospel message to be woven into the very fabric of our people’s existence,” he said. “In so doing, they were following the consistent path of evangelization traced centuries before by the monastic orders, followed also by the Holy See which founded the first universities of studies in Europe.”

Yet, Catholic education in the United States has been forced to adapt its strategy with a rapidly changing culture, he pointed out.

While Catholic parishes with their own individual schools used to be sufficient for “identity, meaning and nourishment in a new world struggling to come to its own realization,” Catholic education is now confronted with the demands of meeting a new, modern world suffering from weakening Catholic identity.

“We are all aware that we are at a critical point now in the challenges that are brought to family life in our western world,” said Archbishop Viganò, emphasizing the role of the family in strengthening Catholic schools “on every level, from primary through University stages.”

“That strength, which should be found both in the family and in the schools, will exist only in proportion to its Catholic identity,” he continued. “Again, that strength must be solid and unwavering in its commitment to Truth.”

“If we are to preserve a moral order in our society, we cannot fall prey to the enticements and allurements of a secularized and increasingly pagan civilization,” Archbishop Viganò told U.S. bishops.

Archbishop Viganò elaborated on some of the essential elements of a Catholic education rooted in truth and Church teaching:

Our students should be taught how to pray and how to become familiar with Christ. They should experience how enriching is the encounter with the poor, with the sick, the elderly, and the immigrant — a reality often excluded in our privileged society. They should also experience, along with the great quality of education, the inspiring devotion to Our Lady, and a love for the missions.

As shepherds and pastors, bishops should not be afraid to speak out, defend and preserve Catholic identity Archbishop Viganò stated, quoting Pope Saint Gregory the Great’s Pastoral Rule: “Imprudent silence may leave in error those who could have been taught. Pastors who lack foresight hesitate to say openly what is right because they fear losing the favor of men.”

[C]ontinue to offer unambiguous testimony to this aspect of its foundational Catholic identity, especially in the face of efforts, from whatever quarter, to dilute that indispensable witness. And this is important: its identity, as it was intended from the beginning. To defend it, to preserve it and to advance it!

As such, he gave the bishops two points to consider: renewal and fidelity.

The first point is “the need to give particular attention and care to our Catholic educational institutions so that they would regain the luster of their true identity that has shown forth from them in the past,” he said.

Secondly, “Catholic colleges and universities, renowned for the professional formation of their students, should be encouraged to be faithful to the title of ‘Catholic’ that they bear,” he said. “In this way, their students can be inspired to take their rightful place in the world, teaching others to work toward being the true Catholic family that God intends them to be.”

“While each college or university has its own particular mission, together they ultimately have the solemn obligation to teach the same doctrine of the universal Church and to define the moral obligations that mark us all as Catholic Christians,” Archbishop Viganò stated.

In a preview of the event, Cardinal Giuseppe Versaldi, prefect for the Congregation, stressed the critical importance of strong Catholic identity and loving witness, which he said “wins out” in the end.

Representatives of The Cardinal Newman Society, along with many educators from around the world, are currently in Rome to participate in the World Congress.