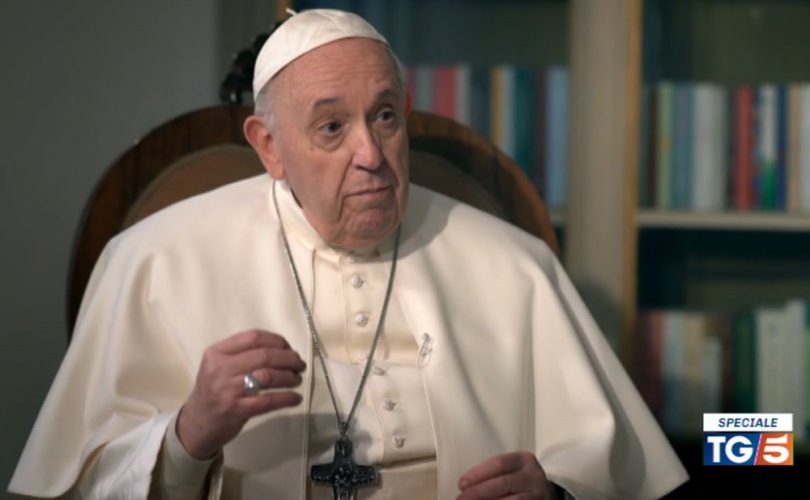 January 11, 2021 (LifeSiteNews) – Pope Francis stated in a recent interview that he was “very astonished” about recent scenes of political-driven conflict in the United States given the country is “such a disciplined people, a democracy, no?”

The Pope, in an interview with Fabio Marchese Ragona of the Italian news program Tg5 — broadcast in Italy on Sunday evening — said that it is a “reality” that even in the “most advanced societies, there is always something wrong, something about people who take a path against the community, against democracy, against the common good.”

Francis thanked God during the interview for the events that “erupted” since they allow people to see clearly the problem and how it is “to be remedied,” according to a translation by National Catholic Register’s Edward Pentin.

Such “violence,” the Pope added, “must be condemned, irrespective of the people,” and that “sooner or later” groups that are “not included in society will cause these situations of violence.”

On January 6, the day when Congress was scheduled to certify the Electoral College votes that had Joe Biden as frontrunner for the presidency, a number of violent people along with Trump supporters entered the Capitol building. There was destruction of property. There were five deaths connected to the event. One of those who died was a police officer. This happened on the same day of a Save America Rally in Washington, D.C., where Trump addressed hundreds of thousands of his supporters. The violence was condemned by Trump and his administration.

This is not the first time Pope Francis has addressed social unrest in the United States.

During his June 3, 2020, General Audience, the Pope criticized, but did not outright condemn, the violence and destruction provoked by Black Lives Matter aftervthe death of George Floyd. The violence included the murder of five police officers, multiple citizens being shot, some of them dying, as well as the looting and burning of businesses and police buildings. The riots happened in about a dozen or so cities across America. In some cities, certain streets were hijacked and turned into so-called autonomous zones where the official arms of law and order were not allowed to enter.

“Dear brothers and sisters in the United States, I have witnessed with great concern the disturbing social unrest in your nation in these past days, following the tragic death of Mr George Floyd,” the Pope said at that time.

“My friends, we cannot tolerate or turn a blind eye to racism and exclusion in any form and yet claim to defend the sacredness of every human life. At the same time, we have to recognize that ‘the violence of recent nights is self-destructive and self-defeating. Nothing is gained by violence and so much is lost,’” he added.

While Pope Francis has been a vocal critic of Donald Trump and his policies (see for example here, here, and here), he appears to have a more accommodating relationship with Joe Biden, a man who claims to be Catholic while supporting unrestricted abortion.

Biden related last month how he and the Pope had talked on the phone after the Nov. 3 presidential election and how the Holy Father had extended “blessings and congratulations.” In a short press statement released on the Biden-Harris transition website, Biden “thanked His Holiness for extending blessings and congratulations and noted his appreciation for His Holiness’ leadership in promoting peace, reconciliation, and the common bonds of humanity around the world.”