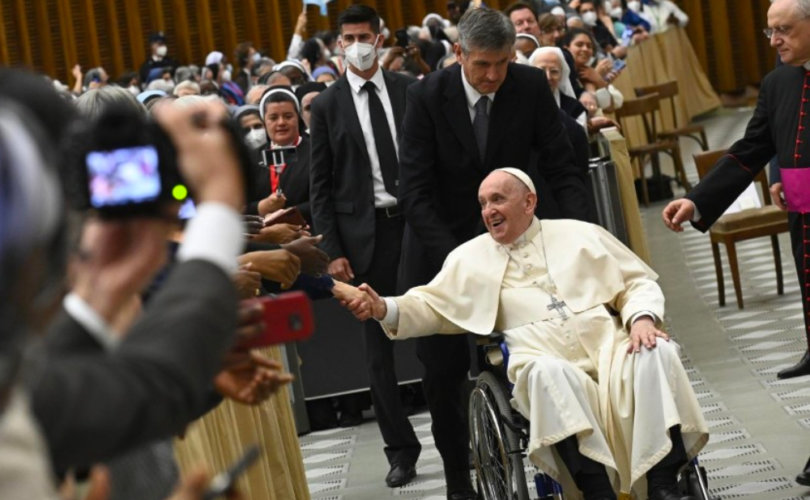 VATICAN CITY (LifeSiteNews) – Today Pope Francis used a wheelchair for the first time since his colon surgery in July of 2021, following a medical intervention this week for an injured knee.

The Pope was pushed in a wheelchair by aides to his place in the Paul VI Hall, where he received participants from the plenary meeting of the International Union of Superiors General.

Due to continuing knee pain, Pope Francis arrives in a wheelchair to meet heads of religious congregations, emphasizing the importance of recognizing our own vulnerability.

On May 3, the Pope underwent a medical intervention for a torn ligament, which has been causing pain in his right knee and leg. The Holy Father said on April 30 that his doctor had ordered him not to walk.

“I have a torn ligament,” the 85-year-old pontiff said, according to Italian newspaper Corriere della Sera. “I’ll do an intervention with infiltrations and we shall see. I have been like this for some time, I cannot walk. … It also brings a little pain, humiliation.”

At the Consecration of Russia and Ukraine to the Immaculate Heart of Mary on March 25, the pontiff walked limping into and outside of the Basilica of St. Peter.

This week, following the medical intervention for his knee, at the general audience of Wednesday, May 4, in St. Peter’s Square, the Pope needed assistance when standing up from his chair.

📹 VIDEO | Sound on! Listen to thousands of pilgrims encouraging Pope Francis as he makes a huge effort to stand up and walk at the end of the general audience. He is undergoing treatment for a torn ligament in his knee. Stay strong, dear Holy Father!

Pope Francis’ use of the wheelchair comes after his physical condition visibly declined in recent months, resulting in his daily schedule being cleared at short notice in the past few weeks.

However, the Pontiff’s plans for the upcoming months include a number of foreign travels, aside from the normal daily operations at the Vatican. He is due to visit Lebanon in June; Congo and South Sudan in early July; possibly due to visit Canada in late July; and he will attend an inter-religious meeting in Kazhakstan in September.