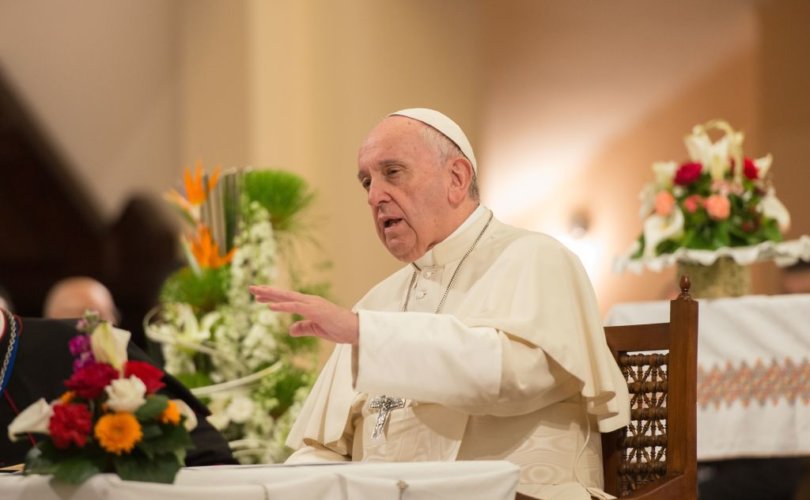 Pope Francis makes a speech during his visit at the St. Peter's Cathedral in Rabat, Morocco on March 31, 2019.Jalal Morchidi/Anadolu Agency/Getty Images

RABAT, Morocco, April 2, 2019 (LifeSiteNews) – Pope Francis has asked Christians in Morocco not to actively seek converts to their faith.

In a headline-grabbing homily in Rabat’s Cathedral of Saint Peter this Sunday, the Bishop of Rome told the congregation that although they found being a minority uncomfortable, he did not see it as a problem, suggesting that Christians are meant to be a minority in the Arab world.

“What are Christians like, in these lands? To what can we compare them?” he asked. “They are like a little yeast that Mother Church wants to mix in with a great quantity of flour until all of it is leavened,” he continued.

“For Jesus did not choose us and send us forth to become more numerous! He called us to a mission. He put us in the midst of society like a handful of yeast: the yeast of the Beatitudes and the fraternal love by which, as Christians, we can all join in making present his kingdom.”

Francis stated that the Christian mission does not consist in baptizing more Christians but in generating “change” and awakening “wonder and compassion.” He said that Christians do this by the way they live with their non-Christian neighbours. The pope condemned proselytization — the attempt to bring others into the Christian community — and cited the words of his predecessor.

Francis said that Christianity’s “problem” was not when there are few Christians but when they are “insignificant.”

“The paths of mission are not those of proselytism, which leads always to a cul-de-sac, but of our way of being with Jesus and with others,” he stated.  “The problem is not when we are few in number, but when we are insignificant, salt that has lost the flavour of the Gospel – this is the problem – or lamps that no longer shed light (cf. Mt 5:13-15).”

Francis decried Christians who might worry that there are so many non-Christians, saying that they are called to be minority “yeast” among the “flour” of the majority, explaining that they are Christians only because they have been “loved and encountered”, not because they have been convinced of the Christian faith. “For being a Christian is not about adhering to a doctrine, or a temple or an ethnic group,” he said.

“Being Christian is about an encounter, an encounter with Jesus Christ. We are Christians because we have been loved and encountered, and not as the result of proselytism. Being Christian is about knowing that we have been forgiven and knowing that we are asked to treat others in the same way that God treated us. For ‘by this everyone shall know that you are my disciples, if you have love for one another’(Jn 13:35).”

The pontiff's sentiments against “proselytism”, which made headlines throughout the world, were largely understood to be a broadside against a missionary attempt to convert non-Christians to the Christian faith.

The headline in India’s The Hindu was “Conversion is not your mission, Pope Francis tells Catholic in Morrocco.” The Jerusalem Post titled the story “Pope to Catholics in Morocco” Your mission is not conversion.” In the UK’s Daily Telegraph the story was headlined “Pope Francis urges Moroccan Christians against converting others.”

Christianity holds that it is only through Jesus Christ that people can attain everlasting life. As Prefect of the Congregation for the Doctrine of the Faith, Cardinal Ratzinger, now Pope Emeritus Benedict XVI, signed a document called Dominus Iesus (“The Lord Jesus”) that reaffirmed the necessity of Christian baptism for eternal happiness.

The Lord Jesus, before ascending into heaven, commanded his disciples to proclaim the Gospel to the whole world and to baptize all nations: ‘Go into the whole world and proclaim the Gospel to every creature. He who believes and is baptized will be saved; he who does not believe will be condemned’ (Mk 16:15-16); ‘All power in heaven and on earth has been given to me. Go therefore and teach all nations, baptizing them in the name of the Father, and of the Son, and of the Holy Spirit, teaching them to observe all that I have commanded you. And behold, I am with you always, until the end of the world’ (Mt28:18-20; cf. Lk24:46-48; Jn 17:18,20,21; Acts 1:8).

Michael Hichborn of the Lepanto Institute told LifeSiteNews that the idea that Catholics are somehow “running about bashing anyone who isn't Catholic on the head to make them convert” is simply not happening.

“Pope Francis has consistently preached against 'proselytism' since the very beginning of his pontificate, as if the Faithful have been running about bashing anyone who isn't Catholic on the head to make them convert.  Not only is this NOT happening, but the very opposite is the case; the Church is full of individuals who lack zeal for the conversion of souls,” Hichborn said.

Hichborn noted that the Pope wrongly attributed words to Saint Francis of Assisi in his Sunday homily. The pontiff summed up St. Francis’ missiology as “'Go out and preach the Gospel: and if necessary, also with words.'” According to Hichborn, St. Francis never said that and certainly did not live by it.

The founder of the Franciscan order was himself a missionary, and attempted to convert the Sultan of Egypt. In the words of Fr. Augustine Thompson, OP, St. Francis “was an ambassador of the Lord Jesus Christ and had come for the salvation of the sultan’s soul.”

“When St. Francis of Assisi went to try to convert the Sultan, his very first words to him were, 'If you do not wish to believe we will commend your soul to God because we declare that if you die while holding to your law you will be lost; God will not accept your soul. For this reason we have come to you.'  St. Francis actually began his attempt to convert the Sultan with a warning about following a false religion,” Hichborn continued.

“And that simply will not happen unless we are preaching the Gospel and standing as witnesses for the Truth,” he added.

Reviewer Benjamin J. Vail, in his Catholic World Report review of a film about Francis and the Sultan, observed that St. Francis’ purpose was to evangelize the Muslims. He did this with courage and respect.

“He boldly, bravely, and unapologetically proposed the truths of the Catholic faith to him at great personal risk. He did so with respect – peacefully, humbly, without denigrating or attacking Islam, and with good will,” Vail continued.

“In this sense, he is a good model for interreligious dialogue today. It is vital for Catholics to be able to talk with people of other faiths – to be able to share the gospel truth, to be able to listen respectfully, and to look for common ground.”

It is against the law in Morocco for anyone of the Muslim majority to convert to Christianity. Christians make up only 1% of the population of the North African country. Christians have lived in Morocco since Roman times although their numbers were eradicated during the Islamic conquest. During the French Protectorate, best known to contemporary Americans through the classic film Casablanca, approximately half a million European Christians, notably Spanish-speaking Catholics, lived in the country.