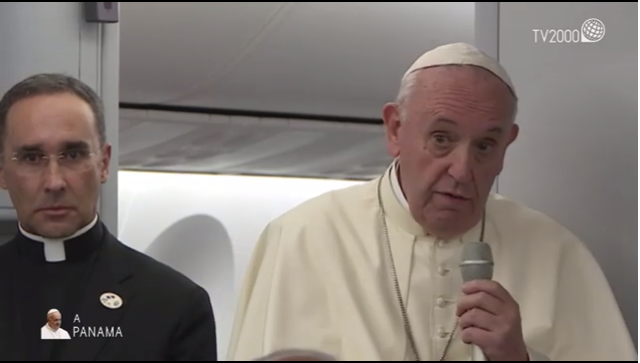 During an inflight press conference on his return to Rome from World Youth Day on Sunday, a Panamanian reporter asked the Pope his views on sex education, particularly in light of rising out-of-wedlock pregnancy rates in Central and Latin America. The reporter noted that critics of the Catholic Church blame the Church for the problem, “because it opposes sex education.”

The Pope continued, saying he believes children ought to be taught that “sex is a gift from God, but not with rigidity,” since education is about bringing out the best in people and “accompany[ing] them along the way.”

He said the problem lies with “those who are responsible for education, whether at the national or local level,” e.g. what teachers and textbooks are chosen for this task.

“I have seen some books that are somewhat dirty,” he told journalists aboard the papal plane. “I have seen all types [of books]. There are things that [help people to] mature and things that do harm.”

It’s difficult to know what Pope Francis means by “objective” lessons in human sexuality, as one need look no further than the Vatican’s former Pontifical Council for the Family (now incorporated into the Dicastery for Laity, Family and Life) to find a sex-ed program criticized by life and family leaders as “thoroughly immoral” and “entirely inappropriate.”

Two years ago, ahead of the 2016 World Youth Day in Poland, and under the direction of Archbishop Vincenzo Paglia, the council released a sex-ed program for teens which included sexually explicit images, recommended sexually explicit movies as a springboard for discussion among mixed classes (boys and girls) ages 14-17, but left out any mention of mortal sin or the sixth and ninth commandments.

On the subject of sex-ed in Panama, the Pope said he didn’t want to enter into local politics but reiterated: “we need to have sex education for children.”

Not specifying at what age such education should begin, the Pope said “the ideal” is “to begin at home, with the parents.” But he added that this is “not always possible,” either because of the family situation, or because parents “don’t know how” to teach their children about human sexuality.

“The school makes up for this,” he said, adding that if sex education is not provided the “void” will be “filled by any ideology.”

This is not the first time Pope Francis has spoken about the role of schools in providing sex education for children. A section in Chapter 7 of his apostolic exhortation on love in the family, Amoris Laetitia, was dedicated to “the need for sex education.” Yet there is no mention in the section of parental rights, but only of the need for “educational institutions” to “provide a positive and prudent sex education.”

In his comments during the inflight press conference, the Pope also did not mention what role local parishes might play in educating parents so that they can form their children according to the Catholic vision of human sexuality.

Pope Francis’s predecessors had a great deal to say both about human sexuality and about the role of parents in forming their children.

In his letter on the Christian family in the modern world, Familiaris Consortio, Pope St. John Paul said that parents are called to give their children a “clear and delicate sex education” that is “truly and fully personal.”

John Paul II also insisted on the fundamental right and duty of parents as the primary educators of their children. In Familiaris Consortio n. 37, he wrote:

“Sex education, which is a basic right and duty of parents, must always be carried out under their attentive guidance, whether at home or in educational centers chosen and controlled by them. In this regard, the Church reaffirms the law of subsidiarity, which the school is bound to observe when it cooperates in sex education, by entering into the same spirit that animates the parents.”

He also insisted that “education for chastity is absolutely essential” to forming young people and children, since it is “a virtue that develops a person’s authentic maturity and makes him or her capable of respecting and fostering the ‘nuptial meaning’ of the body.”

“Christian parents,” he said, should form their sons and daughters in a way that enables them to perceive and receive God’s call for their life. With this in mind, he said parents should “devote special attention and care to education in virginity or celibacy as the supreme form of that self-giving that constitutes the very meaning of human sexuality.”

Writing in 1981, Pope John Paul II also reaffirmed the Church’s opposition to any form of imparting sex information that is “dissociated from moral principles.” This, he said, only opens children and young people “to vice.”

Pope John Paul II’s words to parents were prophetic. Today across the world the rights of parents are frequently trampled upon by schools, as children — even little ones — are indoctrinated in gender theory, transgenderism and “LGBT” ideology through so-called “sex education” classes.

Here below is a LifeSite translation of the Q&A from the inflight press conference based on transcripts currently available. It will be updated as soon as the Vatican releases the official transcript.

Cabrerà (Panama): There is a problem throughout Central America, including Panama and much of Latin America: girls get pregnant early. In Panama alone, there were ten thousand last year. Detractors of the Catholic Church blame the Church because it opposes sex education. The Catholic Church has many schools in Latin America and in universities. I would like to know the opinion of Pope Francis on sex education…

Pope Francis: I believe that we must provide sex education in schools. Sex is a gift from God, it is not a monster, it is a gift from God, in order to love. That some people use it to earn money or exploit others is another problem. But we need to offer an objective sexual education, as it is, without ideological colonization. Because if in schools you start offering sexual education soaked with ideological colonization, you destroy the person. Sex as a gift from God must be taught, not with rigidity. To educate, from “to form,” is to make the best of the person emerge and to accompany them along the way.

The problem is with those responsible for education, whether at the national or local level as well as (…), which teachers are chosen for this task and which textbooks, etc.. I have seen some books that are somewhat dirty. I have seen all types [of books]. There are things that [help people to] mature and things that do harm.

I don’t say this without putting myself in the political problem of Panama. But they need to have sex education. The ideal is to start from home, with the parents. It is not always possible because there are so many different situations in families, and because they do not know how to do it. And so the school makes up for this, because otherwise it will remain a void that will then be filled by any ideology.