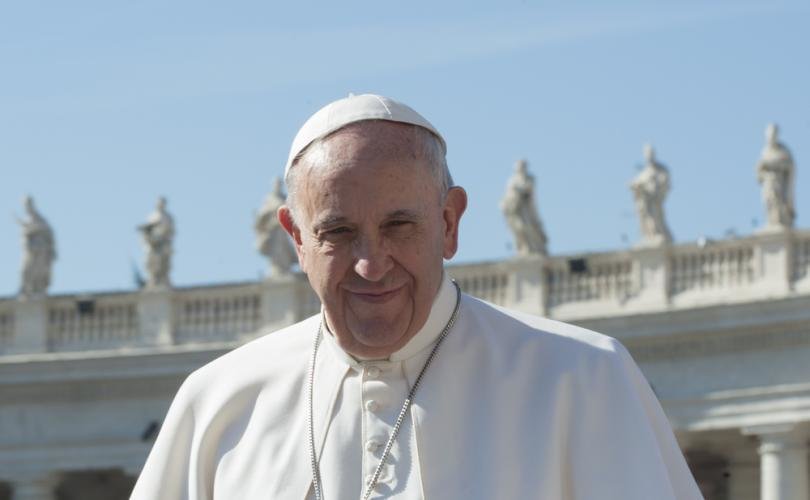 August 26, 2019 (LifeSiteNews) — Pope Francis has officially expressed his appreciation for the creation of a committee in charge of spreading the principles of tolerance and cooperation promoted by the Document on Human Fraternity for World Peace and Living Together, which he signed in Abu Dhabi last February with the Grand Imam of Al-Ahzar University in Cairo, Ahmad el-Tayeb.

In a written statement from the Holy See Press Office, Pope Francis spoke of his pleasure after learning of the initiative that was made public last week by the Emirates News Agency and later confirmed by the Vatican. It was unclear at the time which authorities had actually founded the new committee, which includes a number of Muslim dignitaries but also the Pope’s second personal secretary, Monsignor Yoannis Lahzi Gaid, and the president of the Pontifical Council for Interreligious Dialogue, Bishop Miguel Ángel Ayuso Guixot.

Bishop Ayuso Guixot gave a lengthy interview to Vatican Radio to promote the work of the new committee that was also published Monday by the Holy See Press Office, which is an indication of the importance attributed to the event.

Pope Francis’ own words made clear that the committee was created by the United Arab Emirates, whom he thanked for “the concrete commitment shown on behalf of human fraternity,” expressing hope that similar initiatives may spring up in other parts of the world, according to Vatican News.

“Although sadly evil, hatred, and division often make news, there is a hidden sea of goodness that is growing and leads us to hope in dialogue, reciprocal knowledge and the possibility of building – together with the followers of other religions and all men and women of good will – a world of fraternity and peace,” the Pope said in his statement.

That means he’s clearly standing by the full text, principles and aims of the Abu Dhabi document, which has been widely criticized by faithful Catholics for claiming that a “diversity of religions” is “willed by God,” a statement incompatible with Catholic doctrine. It says, “The pluralism and the diversity of religions, colour, sex, race and language are willed by God in His wisdom, through which He created human beings.”

Critics say this amounts to putting the Catholic faith and its worship of the God of revelation on a same plane with religions that do not worship the true God and deliberately reject Him. It also contradicts the teaching according to which there is no salvation outside of the Catholic Church.

In an interview with Vatican News, Bishop Ayuso Guixot addressed this criticism according to which, as interviewer Alessandro Gisotti from Vatican Radio put it, “It is believed that the declaration of Abu Dhabi seeking dialogue risks slipping into syncretism,” in diplomatic but inflexible terms:

“While respecting the opinions of those who may think that the Abu Dhabi Declaration may slip into syncretism or relativism, even in good faith, I believe that fear is the number one enemy of inter-religious dialogue,” he said.

“The Catholic Church recalls the value of its own identity, the courage of otherness and the sincerity of intentions. It is not a matter of making a ‘melting pot’ in which all religions are considered equal, but that all believers, those who seek God and all people of good will without religious affiliation, have equal dignity. We must therefore commit ourselves so that God, who created us, is not a reason for division, but for unity.

“Let us open ourselves up to the adventure of becoming companions in the journey of every human being on our way to the truth. To live one’s own identity in the ‘courage of otherness’ is the threshold that today the Church of Pope Francis asks us to cross. Only in this way can fidelity to God, in Jesus, become a new story, the construction of a civilization of the covenant that embraces in peace and in the exchange of gifts the richness of differences.

“The pluralism, and not only religious pluralism, of our societies is a reality that invites us to reflect on our identity without which there is no authentic interreligious dialogue.”

This is confusing to say the least, and the “courage of otherness” has yet to be defined. Whatever Bishop Ayuso Guixot said about living “one’s own identity” is watered down by the unapologetic omission of the fact that Catholics believe they know the truth, thanks to Jesus Christ, who revealed Himself to mankind as “Truth, Way and Life,” the Son of God who is truly God and truly Man – an assertion that is fundamentally unacceptable to a Muslim believer remaining true to his own religious opinions.

It was besides Jesus Christ Himself who said He brought the sword, and not peace as this world understands it.

In the interview, Ayuso Guixot called the creation of the Higher Committee “a significant act,” adding that its aim to “work for peace in the world in order to ensure that future generations can live in a climate of mutual respect and healthy coexistence” is a “truly noble goal.”

“I am grateful to the Crown Prince of Abu Dhabi, His Highness Sheikh Mohamed bin Zayed Al Nahyan, who has worked to develop initiatives to put into practice the objectives of the Abu Dhabi document. As I am also grateful to Pope Francis and the Grand Imam of Al-Azhar because with their words and their testimony they made possible what the Crown Prince said in the presentation of this Higher Committee,” the President of the Pontifical Council for Interreligious Document explained.

Ayuso Guixot thanked Pope Francis for calling on people of good will to promote “fraternity, peace and coexistence.”

“Let us not forget that these three elements are essential if we really want to heal the wounds of our world. They are the ABCs of our future,” he said. A strange statement, for the wounds of our world are those of original sin and revolt against the true God, and those wounds are healed only by the redemptive Sacrifice of Our Lord.

This does not exclude human beings from striving for mutual understanding and absence of destructive violence toward their neighbor on a human plane, but history has shown the fragility of these endeavors when not founded in truth.

Ayuso Guixot went into further detail, which did not make things more clear. “Many have collaborated in the project of the declaration which, in my opinion, as Pope Francis would say, recalls the image of a polyhedron. I consider it in fact in its many aspects an inclusive document,” Ayuso Guixot said.

The bishop believes that the Abu Dhabi document is a “global appeal to the ‘civilization of love,’ which is opposed to those who want a clash of civilizations!” he said. He added, “Prayer, dialogue, respect and solidarity are the only winning weapons against terrorism, fundamentalism and all kinds of war and violence. And they are weapons that are part of the spiritual arsenals of all religions.”

Such statements spark from a deeply irenic analysis of Islam – to name only that religion – which in its fundamental texts and history promotes violence in order to impose beliefs, in particular toward Christians and Jews.

“The declaration stems from the Islamic-Christian dialogue in the context of a global conference on human brotherhood. And it is in this global context that the message of the Declaration is poured out throughout the world as a ‘new’ window that opens in the context of the Spirit of Assisi,” he explained. ”Consequently, beyond the who, where and when, this universal message of brotherhood, peace and common living together is inclusive and shareable by all believers of all religions, together with all people of good will.”

In another part of the interview, Bishop Ayuso Guixot encouraged grass-roots initiatives, particularly aimed at young people in schools and universities, to make known the Abu Dhabi declaration and implement its values of “fraternity.”

Prompted by the interviewer, the bishop expressed his appreciation for the interfaith meeting among Christian and Muslim youth that took place last weekend in Taizé, the Protestant community in France that has deeply influenced many Catholic thinkers and leaders.

Ayuso Guixot called it “a beautiful initiative that adds to the numerous initiatives already implemented and that continue to develop from below, and that show that the Abu Dhabi Declaration has been signed by both the Pope and the Great Imam, as a common commitment so that its many contents may be implemented. The Taizé event educates young people, but we must also think about educating educators and religious leaders, because as expressed at the last meeting in Rimini, the future will be religious.”

At the interfaith meeting in Taizé, Christians – including Catholics – and Muslims were invited to discover each others’ traditions and prayers. Photos published by the local press show young Christian girls removing their shoes and covering their heads to follow Muslim girls praying in a special room set apart for them, and Christian youths joined Muslim men to listen to a local imam preach.