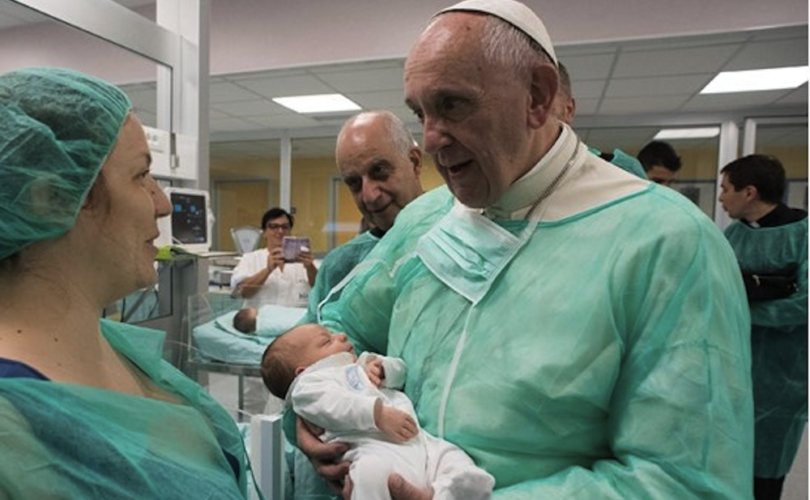 ROME, Italy, September 16, 2016 (LifeSiteNews) — On Friday, the Holy Father spent some time with newborns in a neonatal hospital unit and with terminally patients at a hospice as part of his surprise “Mercy Friday” visits during the Jubliee Year of Mercy.

The Vatican said this week's trip was focused on emphasizing the Church’s commitment to the dignity and defense of human life from conception to natural death.

“The Holy Father wanted to give a strong sign of the importance of life, from its first moment to its natural end,” the Vatican said in a statement.

“The acceptance of life and the guarantee of human dignity at all stages of development are lessons repeatedly stressed by Pope Francis,” the Vatican added, especially showing mercy “to those in the most vulnerable and precarious situations.”

Friday’s first stop was an emergency room and the neonatal care center at Rome’s San Giovanni hospital. Photos from the hospital showed Pope Francis wearing a surgical mask and gown over his traditional papal vestments while holding a newborn. The Vatican said Francis took the necessary sanitary precautions before entering the unit, which had 12 babies in various stages of health, including five in critical condition.

Reports indicated that Pope Francis talked to each baby in an incubator and also with their parents to offer support, asking the support team while holding one newborn named Emiliano whether the baby was “eating well.” Francis appeared to enjoy seeing the babies, leaving a papal medal in the crib for each family.

The Pope also asked about the conditions of the other babies in the unit while chatting with and greeting staff members before going to the next floor to meet with staff and families in the nursery.

Then it was on to the Villa Speranza Hospice at Gemelli University Hospital Foundation, which is located north of Rome. Upon arrival, the Holy Father greeted each of the 30 terminally ill patients and their families.

Pope Francis’ previous “Mercy Friday” visits have included a drug and alcohol rehabilitation center, a home for retired priests, and a nursing home. He also visited a hospital in Poland during his trip to World Youth Day.