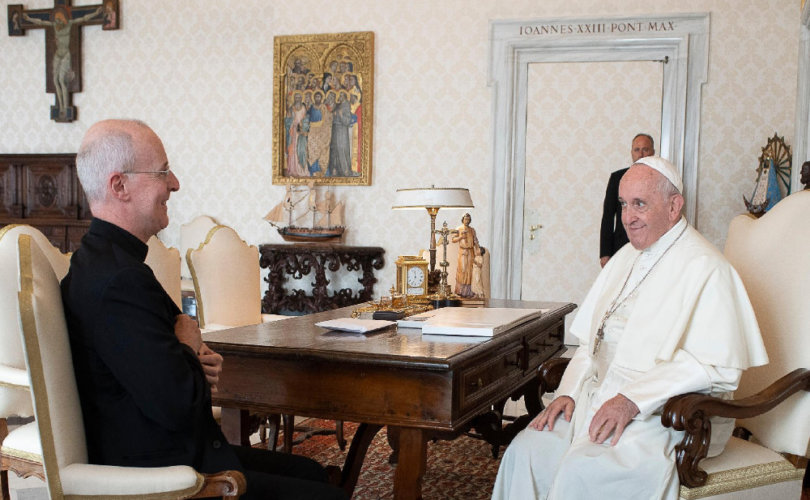 VATICAN CITY (LifeSiteNews) – Pope Francis has written a letter to “LGBT Catholics,” delivered via dissident Jesuit priest Father James Martin, declaring that a “selective” Church is “a sect,” and decrying what he styled as the Church’s “rejection” of “LGBT Catholic[s].”

The letter was announced May 8, and published May 9 in an article written by Martin for Outreach, which is “a new LGBTQ Catholic resource” he recently set up.

Martin noted that he had himself written to Pope Francis on May 5, asking “if he would be willing to respond to a few of the most common questions that I am asked by LGBTQ Catholics and their families.”

The request took the form of “three questions,” which the Pope responded to in Spanish, addressing Martin as “brother” in the handwritten note which was delivered just three days later. (Full English text at the bottom of this article)

Outreach is delighted to announce that we will soon be running a very brief interview with Pope Francis, who graciously responded to three common questions from the LGBTQ community. We’re very grateful to the Holy Father for his kindness, even in the middle of his recuperation.

Breaking: Pope Francis @Pontifex sends message to LGBTQ Catholics in mini-interview with Outreach, answering three brief questions often posed by LGBTQ Catholics: “A ‘selective’ church, one of ‘pure blood,’ is not Holy Mother Church, but rather a sect.” https://t.co/ejjjDkrPaw

‘Selective’ Church is a ‘sect’

In response to Martin’s first question – “What would you say is the most important thing for LGBT people to know about God?” – Francis wrote that “God is Father and he does not disown any of his children.”

As such, “‘the style’ of God is ‘closeness, mercy and tenderness’,” said Francis. “Along this path you will find God.”

Martin had also enquired what the Argentinian Pontiff desired “LGBT people to know about the church,” to which Francis responded briefly:

I would like for them to read the book of the Acts of the Apostles. There they will find the image of the living church.

The most striking part of Francis’s short letter came in his answer to Martin’s third question, which asked the Pope what he would say “to an LGBT Catholic who has experienced rejection from the church.”

Pope Francis’s letter to Martin, who wrote in the name of Outreach, is particularly significant given that the pro-LGBT group only officially launched on May 1, just days before Francis replied to Martin. Pope Francis had recently undergone a medical procedure May 3 for an ongoing problem with his knee.

However, while Francis refers to “rejection” as not being that “of the church,” Catholic doctrine on homosexuality conveys a different message. The Catechism of the Catholic Church #2357 teaches that: “‘homosexual acts are intrinsically disordered.’ They are contrary to the natural law. They close the sexual act to the gift of life. They do not proceed from a genuine affective and sexual complementarity. Under no circumstances can they be approved.”

Any such concept of “rejection” from the Church in the area homosexuality lies in the adherence to the natural law, which finds such “homosexual acts” to be “intrinsically disordered.”

The Catechism notes that those suffering with homosexual tendencies “must be accepted with respect, compassion, and sensitivity,” but that such people are nevertheless “called to chastity.”

“By the virtues of self-mastery that teach them inner freedom, at times by the support of disinterested friendship, by prayer and sacramental grace, they can and should gradually and resolutely approach Christian perfection,” the Church teaches.

Father Martin has gained notoriety along with condemnation from faithful prelates for his promotion of LGBT ideology among Catholic circles, and in the name of the Church. Among his most infamous actions, Martin promoted an image drawn from a series of blasphemous, homoerotic works, showing Christ as a homosexual, promoted same-sex civil unions, and has described viewing God as male as “damaging.”

Pope Francis and Martin met privately in September 2019, in what was reportedly their third meeting, although their first substantial conversation. Both Martin, and America Magazine of which he is an “editor-at-large,” proclaimed the meeting as being “a public sign” of the pontiff’s “support” for Martin’s work promoting LGBT ideology in the name of Catholicism.

In April 2017, Pope Francis had appointed FMartin as one of the 13 consultors who advise the Vatican’s Dicastery for Communications, and the Vatican invited him to speak at the 2018 World Meeting of Families in Dublin on “Exploring how Parishes can support those families with members who identify as LGBTI+.”

Since the CDF’s March 2021 responsum condemning same-sex “blessings,” Pope Francis has made numerous public statements praising and supporting advocates of LGBT ideology and same-sex civil unions. He has notably made a number of statements in support of dissident nun Sister Jeannine Grammick and her previously condemned pro-LGBT group New Ways Ministry.

Thank you for your mail.

With respect to your questions, a very simple response occurs to me.

Thank you for everything you do. I pray for you, please do so for me.

May Jesus bless you and may the Holy Virgin guard you.