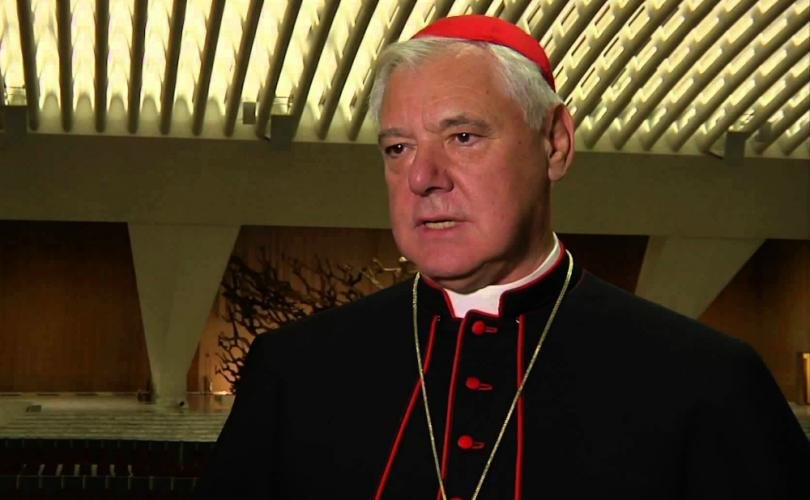 WASHINGTON, D.C., July 20, 2021 (LifeSiteNews) – A German cardinal came out swinging against the new restrictions imposed upon the Traditional Latin Mass.

Müller, a former Prefect of the Congregation for the Doctrine of the Faith (CDF), published his critique of Traditionis Custodes (TC) in the online The Catholic Thing yesterday. In it, the cardinal rejects the demands made by the Pope to restrict the celebration of the TLM.

“Without the slightest empathy, [Francis] ignores the religious feelings of the (often young) participants in the Masses according to the Missal John XXIII (1962),” he stated.

“Instead of appreciating the smell of the sheep, the shepherd here hits them hard with his crook.”

Müller focused his attention on “Letter to the Bishops of the Whole World,” the document that accompanies Francis’ motu proprio. In this letter, the Pope explains his motives for imposing harsh controls over the Latin Mass.  The cardinal stated that they were “subjective reactions” and lacked an appropriate theological underpinning.

“Beyond the presentation of his subjective reactions, however, a stringent and logically comprehensible theological argumentation would also have been appropriate,”  Müller stated.

“For papal authority does not consist in superficially demanding from the faithful mere obedience, i.e., a formal submission of the will, but, much more essentially, in enabling the faithful also to be convinced with consent of the mind.”

One subjective reaction was the Pope’s intention to defend “the unity of the Body of Christ,” which he said was endangered by adherents to “celebrations according to the liturgical books prior to Vatican Council II” who allegedly reject “the Church and her institutions” as they are conceived by the Second Vatican Council. This apparently led the pontiff to “revoke the faculty” to celebrate the TLM without hindrance. However, Müller asserted that it “seems simply unjust to abolish celebrations of the ‘old’ rite just because it attracts some problematic people: abusus non tollit usum [abuse does not cancel use].”

The cardinal affirmed the Pope’s duty to insist “on the unconditional recognition of Vatican II” and has little time for those who seek a more authentic Church in either the past or the future.

“Nobody can call himself a Catholic who either wants to go back behind Vatican II (or any other council recognized by the pope) as the time of the “true” Church or wants to leave that Church behind as an intermediate step towards a “new Church,” he wrote.

Nevertheless, the cardinal suggested that the Pope should turn his attention to the more pressing problems of disunity with Catholic Tradition found in the abuses of the liturgy according to the 1969/70 missal of Paul VI. The cardinal even suggested that Francis is a hypocrite for singling out the TLM, and those who assist at such Masses, as promoting disunity.

“One may measure Pope Francis’ will to return to unity the deplored so-called ‘traditionalists’ (i.e., those opposed to the Missal of Paul VI) against the degree of his determination to put an end to the innumerable ‘progressivist' abuses of the liturgy (renewed in accordance with Vatican II) that are tantamount to blasphemy,” Müller stated.

Defining the Catholic liturgy as the worship of the “One and Triune God,” the cardinal identified as an abuse of the modern form its “paganization … through the mythologization of nature, the idolatry of environment and climate, as well as the Pachamama spectacle.”

These are all markers of Francis’ papacy that were, the cardinal said, “rather counterproductive for the restoration and renewal of a dignified and orthodox liturgy reflective of the fulness of the Catholic faith.”

Meanwhile, Müller rejects the notion that liturgical diversity is a source of disunity.

“For the unity in the confession of the revealed faith and the celebration of the mysteries of grace in the seven sacraments by no means require sterile uniformity in the external liturgical form, as if the Church were like one of the international hotel chains with their homogenous design,” he wrote.

“The unity of believers with one another is rooted in unity in God through faith, hope, and love and has nothing to do with uniformity in appearance, the lockstep of a military formation, or the groupthink of the big-tech age.”

Müller also corrected an historical misunderstanding made by Francis regarding the motives of St. Pius V when the latter promulgated the Mass of the Ages in 1570 while at the same time restricting the celebration of some less ancient rites.

“The intention of Pope Pius V was not to suppress the variety of rites, but rather to curb the abuses that had led to a devastating lack of understanding among the Protestant Reformers regarding the substance of the sacrifice of the Mass (its Sacrificial character and Real Presence),” the cardinal explained.

Accordingly, Müller believes the texts of the Novus Ordo deserve an overhaul.

“Rome must oversee translation of the normative texts of the Missal of Paul VI, and even of the biblical texts, that might obscure the contents of the faith,” he wrote.

“Presumptions that one may 'improve' the verba domini [words of the Lord] (e.g. pro multis – “for many” – at the consecration, the et ne nos inducas in tentationem – “and lead us not into temptation” – in the Our Father), contradict the truth of the faith and the unity of the Church much more than celebrating Mass according to the Missal of John XXIII.”

A member of the German hierarchy, Müller is intimately acquainted with the plans of his nation's bishops’ conference, which includes the controversial “Synodal Way” of the German clergy. This is an ecclesial method of dialoguing on contemporary issues in theology and morality much lauded by the Argentinian pontiff. Francis has, however, offered remarks of correction to the German bishops; in 2019 when he sent them a 30-page letter in which he pointed out doctrinal landmarks to be considered during the Synodal Way. The letter seemed to make little impact.

In his critique of the new restrictions on the TLM, Müller remarked that the majority of German bishops openly deny a multitude of Catholic teachings, even those affirmed by the Second Vatican Council, and thus are guilty of heresy. Of note is the recent defiance of the German clergy towards the CDF’s ruling against blessings for same-sex unions.

“Here we have a threat to the unity of the Church in revealed faith, reminiscent of the size of the Protestant secession from Rome in the sixteenth century,” Müller lamented and reflected on the inequal treatment meted out to high-ranking German heretics and the world’s TLM community.

“Given the disproportion between the relatively modest response to the massive attacks on the unity of the church in the German ‘Synodal Way’ (as well as in other pseudo-reforms) and the harsh disciplining of the old ritual minority, the image of the misguided fire brigade comes to mind, which – instead of saving the blazing house – instead first saves the small barn next to it.”

The former Prefect of the Church’s doctrinal office asked that “special attention” be given to the Pope’s declaration that the missal of Paul VI is “the unique expression of the lex orandi of the Roman Rite.” The cardinal asserted that it is not possible to “declare the latest missal to be the only valid norm of the Catholic faith.”

“One cannot simply declare the latest missal to be the only valid norm of the Catholic faith without distinguishing between the ‘part that is unchangeable by virtue of divine institution and the parts that are subject to change’ (Sacrosanctum Concilium 21),” Müller wrote.

“The changing liturgical rites do not represent a different faith, but rather testify to the one and the same Apostolic Faith of the Church in its different expressions.”

Considering the new authority given to the Congregation for Divine Worship and the Discipline of the Sacraments, Müller asked that those within the Congregation, headed by vehement anti-traditionalist Archbishop Arthur Roche, “do not become inebriated by power and think they have to wage a campaign of destruction against the communities of the old rite – in the foolish belief that by doing so they are rendering a service to the Church and promoting Vatican II.”

The German cardinal also suggested that learning more about doctrine and the history of the liturgy would contribute both to harmony and a pastoral approach.

“A little more knowledge of Catholic dogmatics and the history of the liturgy could counteract the unfortunate formation of opposing parties and also save the bishops from the temptation to act in an authoritarian, loveless, and narrow-minded manner against the supporters of the ‘old’ Mass,” he wrote.

Despite the seemingly bleak outlook for the liturgical tradition of the Roman Rite, Müller reminded readers that “[t]he provisions of Traditionis Custodes are of a disciplinary, not dogmatic nature and can be modified again by any future pope.”

The papal document, released Friday, has caused a great upheaval within the Catholic Church, eliciting an eruption of consternation and criticism from the faithful, whether or not they feel attached to the ancient liturgy. Among those voices are some of the leading lights of the Catholic academic tradition, such as liturgical expert Dr. Peter Kwasniewski, who has critiqued the historical and juridical standing of the Pope’s attempt to abrogate the Traditional Latin Mass (TLM), and Professor Roberto de Mattei, who articulated the goal of TC as the desire “to eliminate over time the presence of the traditional rite in order to impose the Novus Ordo of Paul VI as the only rite of the Church.”