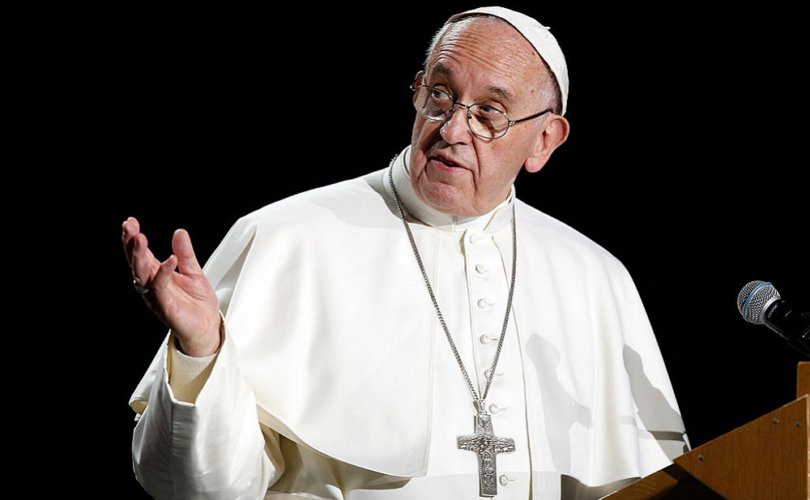 The pontiff will sign the encyclical, entitled Fratelli tutti (“Brothers all”), in the city of Assisi, the birthplace of Saint Francis, after celebrating a private Mass at the saint’s tomb. According to the press office of the Holy See, the document will address “fraternity and social friendship.”

The official title of the document is apparently a reference to a passage of a document St. Francis wrote for the brothers of his order. In Admonition 6, “Of the Imitation of the Lord,” the great saint asked his companions to “consider the Good Shepherd”:

Let us all, brothers, consider the Good Shepherd who to save His sheep bore the suffering of the Cross. The sheep of the Lord followed Him in tribulation and persecution and shame, in hunger and thirst, in infirmity and temptations and in all other ways; and for these things they have received everlasting life from the Lord. Wherefore it is a great shame for us, the servants of God, that, whereas the Saints have practised works, we should expect to receive honor and glory for reading and preaching the same.

This will be the third encyclical of Pope Francis’s pontificate.

Vatican News, an official news website of the Holy See, stated that “fraternity” is a“central theme” of the current pontificate.

“On the evening of his election to the papacy on 13 March 2013, Pope Francis first greeted the world with the word ‘brothers,’” Vatican News accurately recalled.

“The theme of fraternity is also present in his constant embrace of migrants, epitomized in his pastoral visit to Lampedusa [in Sicily],” it continued.

“His signing of the Document on Human Fraternity in Abu Dhabi in 2019 marks one more example of Pope Francis’ dedication to promoting brotherly love.”

Pope Francis’s support for the illegal migration of Asians and Africans to Italy has not found favor with many Italians, leading to a significant drop in his popularity in Italy: from an 88% approval rating shortly after his election to 71% in 2018. The pontiff’s signing of the Document on Human Fraternity in Abu Dhabi set orthodox theologians’ teeth on edge, as the document claims that a “pluralism and diversity” of religions is “willed by God.” After a backlash from bishops and theologians who argued that this statement contradicts Church teaching, including the First Commandment, Pope Francis informally clarified that God’s “permissive will” had allowed other religions to proliferate.

More than one of Pope Francis’s critics have warned that the “fraternity” enshrined in the Abu Dhabi document more closely aligns with Freemasonry than with the Gospel. Shortly after Pope Francis and Grand Imam Ahmed el-Tayeb signed the document, Professor Roberto de Mattei, the president of the Rome-based Lepanto Foundation, told LifeSiteNews that “fraternity” is a core value of the semi-secret society.

“Fraternity is also a dogma of Freemasonry, which in its ideology and rituals offers a parody of Christian doctrine and liturgy,” De Mattei wrote.

“It is no coincidence that the Grand Lodge of Spain, with this tweet, thanked Pope Francis for his Message of December 25, 2018, ‘Todos los masones del mundo se unen a la petición del Papa por ‘la fraternidad entre personas de diversas religiones’” [“All the Freemasons of the world join the Pope’s request for ‘fraternity between people of different religions’”].

The Spanish Freemasons stated that Pope Francis’s call for the “triumph of universal fraternity among all human beings” demonstrated a “departure from the content of Humanum genus (1884), the last great Catholic condemnation of Freemasonry.”

“In reality Freemasonry continues to be condemned by the Church, even if the men of the Church, at the highest levels, seem to embrace its ideas,” de Mattei wrote.

“But the teaching of the divine Master continues to resound in faithful hearts: there love for one’s neighbor can only be based on love for God. And without reference to the true God, who can only be loved within the Church’s Ark of Salvation, fraternity is only an empty word that conceals hatred of God and neighbor.”

Subsequent to the signing of the Abu Dhabi document, plans for the construction of a monument to “human fraternity” were announced. The “House of the Abrahamic Family” will unite a Christian church, a Jewish synagogue, and an Islamic mosque in one architectural project. At the news, Archbishop Carlo Viganò expressed his dismay.

“In the garden of Abu-Dhabi the Temple of the World Syncretic Neo-Religion is about to arise with its anti-Christic dogmas. Not even the most hopeful of the Freemasons would have imagined so much!” the former papal nuncio wrote.

St. Francis of Assisi famously attempted to embrace martyrdom in the 13th century by preaching the Gospel to Muslims. According to St. Bonaventure, the caliph of Egypt was so impressed by St. Francis’s bold attempt to convert him that he offered him “many costly gifts,” which the saint refused. The encounter ended in a draw: St. Francis could not convert the caliph, and the caliph would not execute St. Francis — and so the poverello went back “unto the regions of the faithful.”