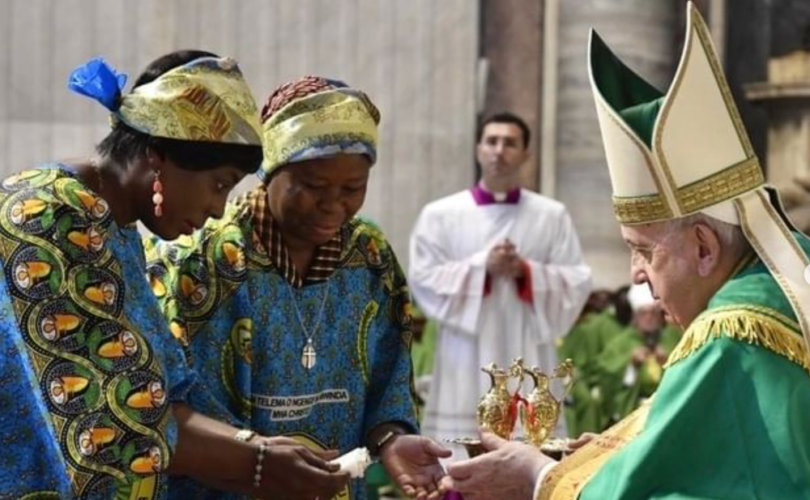 Pope Francis receives the cruets from two women during MassFranciscus/Instagram

VATICAN CITY (LifeSiteNews) — Pope Francis has issued a message praising the 50th anniversary of Pope Paul VI’s abolition of the Catholic Church’s traditional minor orders, calling for further examination of the “richness” of this decision, and hinting at future actions that would undermine the ordained priesthood.

In a nearly 10,000-word message published by the Holy See on August 24, but signed August 15, Pope Francis wrote to “bishops, priests, deacons, consecrated persons” and the entire Church, praising the revolutionary changes brought about by Pope Paul VI in his 1972 motu proprio “Ministeria quaedam.” In that document, Paul VI curtailed the “minor orders” of tonsure, porter, lector, exorcist and acolyte, as well as the major order of subdeacon, highlighting instead “the universal priesthood of believers.” Paul VI also changed the minor orders from “ordinations” to “institutions.”

Francis referenced this 50-year-old document, saying that “in the fruitful but not tension-free context that followed the Second Vatican Council” it “offered the Church an important perspective that had the force to inspire further developments.”

According to Francis, Paul VI’s document is to be understood as the inspiration and guiding light of Francis’ own controversial liturgical writings of 2021. These are his motu proprio “Spiritus Domini” – by which he changed Canon Law to open up the male roles of lector and acolyte to women – and his apostolic letter “Antiquum ministerium,” which further drew on texts from Vatican II to establish the lay ministry of catechist for both men and women.

“These two interventions should not be interpreted as an overcoming of previous doctrine, but as a further development made possible because it is based on the same principles – consistent with the reflection of the Second Vatican Council,” Pope Francis wrote.

Expanding on the Second Vatican Council’s highlighting of the “common priesthood” of the faithful, Francis repeatedly and vaguely referenced the “Spirit,” identifying the process of listening to the “Spirit” as the justification for further liturgical upheaval.

In order to be able to listen to the voice of the Spirit and not halt the process – being careful not to want to force it by imposing choices that are the fruit of ideological visions – I think it is useful to share, all the more in the climate of the synodal journey, the experiences of these years.

The 85-year-old Pontiff suggested that the post-Conciliar decades could “offer valuable indications for arriving at a harmonious vision of the issue of baptismal ministries and thus continue on our journey.”

READ: Pope Francis: Moral and liturgical ‘traditionalism’ in the Church is part of a ‘dead memory’

With this end in mind – apparently presuming the Church had not understood the “baptismal ministries” until Vatican II – Francis revealed his desire for bishops’ conferences around the world to examine the theme behind both his and Paul VI’s revolutionary documents.

For this reason I wish in the coming months, in the ways that will be defined, to initiate a dialogue on the topic with the Bishops’ Conferences in order to be able to share the richness of the ministerial experiences that in these fifty years the Church has lived both as instituted ministries (lectors, acolytes and, only recently, catechists) and as extraordinary and de facto ministries.

The “dialogue” will also work in tandem with the current Synod on Synodality, as the Pope suggested, which is looking for a “decisive” concept of self-understanding for the Church, based on the views of Catholics, including Catholics who no longer practice the faith, and non-Catholics alike.

Papal pushing for female, lay ministry instead of ordained men

The Pope’s letter is particularly significant given its timing. He will appoint 21 new cardinals on Saturday before meeting with all the cardinals for two days the following week. His call for a Church-wide “dialogue” to examine how the gradual abolition of male-only orders can “share the richness” of the past 50 years of the Church, could likely be thus renewed and addressed in next week’s meetings.

This comes on the back of a consistent campaign over the past 18 months by Pope Francis to expand the role of women in the Church. Following Spiritus Domini and Antiquum ministerium, in January 2022, Pope Francis appointed women to the liturgical ministries of catechist and lector for the first time. Only last month he announced women would soon join the male-only commission to appoint bishops.

But Dr. Peter Kwasniewski – Thomist and liturgical scholar – has long warned against Francis’ opening of the Church’s orders to women and laymen.

Writing in response to Francis’ latest letter, Kwasniewski described it as “a solid hymn of praise for the abolition of the traditional hierarchy of lower sacred offices and their substitution by spurious ‘lay ministries’ purportedly rooted in baptism and in a call for greater participation in liturgy. Boilerplate stuff there.”

Pope Francis “substitutes a revolutionary process for coherent doctrine and practice,” Kwasniewski wrote. “And of course, he cites ‘development of doctrine,’ his favorite way to pull rabbits out of hats (or doves out of miters).”

About Paul VI’s Ministeria Quaedam itself, Kwasniewski previously wrote it was a “grievous rupture with a hitherto unbroken Catholic tradition of minor orders and subdiaconate.”

Dr. Kwasniewski’s case against female liturgical ministries of any kind has been thoroughly laid out in his book Ministers of Christ: Recovering the Roles of Clergy and Laity in an Age of Confusion (Sophia, 2021).