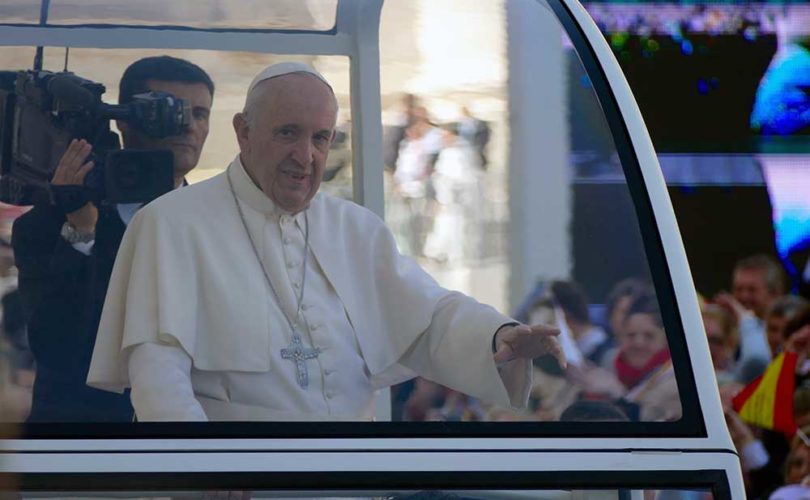 VATICAN CITY, August 14, 2019 (LifeSiteNews) — Pope Francis has downplayed the subject of the married priesthood as a priority at an upcoming synod.

In an August 6 interview with Italian newspaper La Stampa, published August 9, the pontiff said the Synod on the Amazon is the “child of Laudato Si’.”

“Those who have not read it will never understand the Synod on the Amazon,” he told his interviewer Domenico Gasso, Jr.

“Laudato Si’ is not a green encyclical. It is a social encyclical, which is based on a ‘green’ reality, the stewardship of Creation,” the pontiff continued.

Gasso asked Pope Francis if the possibility of ordaining “viri probati, elderly and married men”   is a main theme of the Amazon Synod. Francis replied firmly in the negative.

“Absolutely not,” he said.

“It is simply a number of the Instrumentum Laboris. The important thing will be the ministries of evangelization and the different ways of evangelizing.”

The pontiff did not expand on the subject of evangelization, however. Instead, he focused on environmental issues like pollution, melting glaciers, and deforestation.

“A few months ago seven fisherman told me: ‘In recent months we have collected 6 tons of plastic,’” he said.

“The other day, I read about a huge glacier in Iceland that melted almost completely: they built   a funeral monument. With the fire in Siberia, some glaciers in Greenland lost tons through melting,” he continued.

“The people of a Pacific country are moving because in twenty years the island on which they live will no longer be there.”

The pontiff painted his sober environmental picture with impressionist strokes. As a matter of fact, the vanished Icelandic glacier has so far been commemorated with a plaque, the Greenland glaciers have been affected by both a seasonal heatwave and wildfires from across the entire Arctic region, and the devoutly Christian people of Kiribati are still hopeful that they will not have to move.

“We don’t believe that Kiribati will sink like the Titanic ship,” said the nation’s president, Taneti Mamau, on a promotional video. “Our country, our beautiful lands, are created by the hands of God.”

Francis said he was even more shocked by “Earth Overshoot Day,” the day on which some people believe that human societies have used up all their proper allotment of natural materials for the year, after which point the planet Earth is not able to regenerate these resources.

“On July 29th, we used up all the regenerative resources of 2019,” the pontiff declared.

“Since July 30, we have been consuming more resources than the planet can regenerate in a year. It's very serious. It's a global emergency. And ours will be an urgent Synod,” he continued.

The pontiff stressed that a synod is based in the Christian faith. “A Synod is not a meeting of scientists or politicians,” he explained. “It is not a Parliament: it is something else. It was born of the Church and will have a mission and evangelizing dimension. It will be a work of communion guided by the Holy Spirit.”

Francis told Grasso he was focussing on the Amazon region because it is both diverse and crucial for the health of the globe.

“It is a representative and decisive place,” he said.

“Together with the oceans, it contributes decisively to the survival of the planet. Much of the oxygen we breathe comes from there. That's why deforestation means killing humanity,” he continued.

“And then the Amazon involves nine states, so it doesn’t concern a single nation. And I’m thinking of the Amazonian richness, vegetable and animal biodiversity: it's wonderful.”

The pontiff said economic and political interests threaten this richness and the people of the Amazon and that politicians must stop their conniving and corruption and take responsibility for such ecologically dangerous activities as, for example, open-pit mining.

Asked his worst fear for the planet, Pope Francis listed a number of concerns:

“The disappearance of biodiversity. New lethal diseases. A decline and devastation of Nature that could lead to the death of the human race.”

The pontiff mentioned the activities of such “young ecologists” as Greta Thunberg and said he was struck by a placard held by young environmentalists reading, “We are the future.” He also said he believed that personal activities like household recycling are helpful because they are “concrete actions” and foster a culture of not dirtying the Earth.

During the interview, Pope Francis expressed support for the European Union and the vision of its “Founding Fathers.” He said he was concerned by a focus in Europe on sovereignty, which he called “an attitude of isolation.”

“I am concerned because one hears speeches that resemble those of Hitler in 1934,” he said.