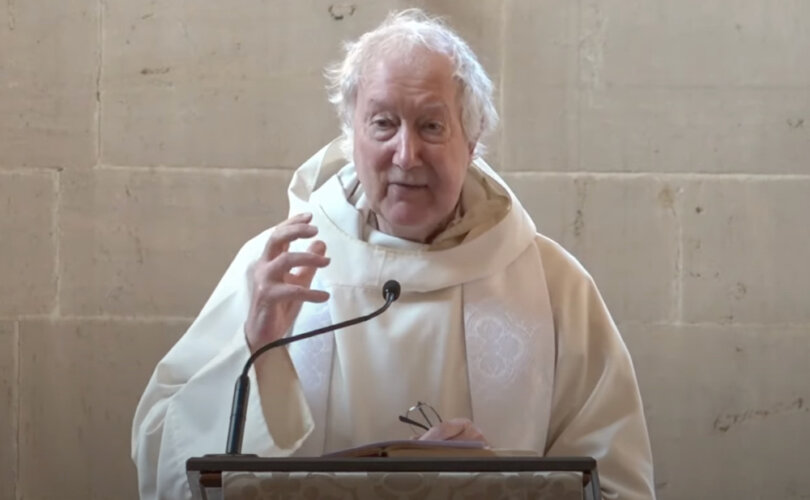 VATICAN CITY (LifeSiteNews) — Pope Francis invited a prominently pro-LGBT priest to lead a retreat for bishops before the start of the next key meeting of the Synod on Synodality.

The English Dominican and theologian Father Timothy Radcliffe is set to lead a three-day retreat in October to commence the meeting of the Synod of Bishops at the Vatican from October 4 through October 29.

Cardinal Jean-Claude Hollerich, S.J., the relator general of the Synod, made the announcement at a press conference this morning, stating that Radcliffe was invited by Pope Francis. Hollerich had just met with the Pope along with Cardinal Mario Grech, the general secretary of the Synod of Bishops.

Prior to Radcliffe’s three-day event, however, the Vatican will host the ecumenical prayer vigil in St. Peter’s Square that is intended to further the “path to Christian unity and the path of synodal conversion of the Church.” The 77-year-old Radcliffe will then preach his retreat outside of Rome before the assembled bishops reconvene at the Vatican to continue their scheduled meetings.

Radcliffe was master of the Dominican Order from 1992 to 2001, but his name is arguably more notorious for his prominent and persistent promotion of LGBT ideology in contradiction of Catholic teaching.

Card. Grech, the General Secretary of the Synod is pro-gay

Sister Becquart, under secretary, is pro-gay

Shortly before the Vatican issued its 2005 document reaffirming the ban on admitting men with “homosexual tendencies” into seminaries, Radcliffe publicly objected to the predicted ban. Writing to the London Times, Radcliffe argued that “[a]ny deep-rooted prejudice against others, such as homophobia or misogyny, would be grounds for rejecting a candidate for the priesthood, but not their sexual orientation.”

Then in an article for The Tablet, he said, “I have no doubt that God does call homosexuals to the priesthood, and they are among the most dedicated and impressive priests I have met.”

— Article continues below Petition —
PETITION: We won't give any money to liberal bishops who attack the Faith
Show Petition Text
11504 have signed the petition.
Let's get to 12500!
Thank you for signing this petition!
Add your signature:
Show Petition Text

Months later, he encouraged Catholics to “accompany” and even live with homosexuals. “We must accompany [gay people] as they discern what this means, letting our images be stretched open,” he said in a 2006 religious education lecture in Los Angeles. “This means watching ‘Brokeback Mountain,’ reading gay novels, living with our gay friends and listening with them as they listen to the Lord.”

In 2012, Radcliffe wrote in the dissident U.K. publication The Tablet, defending the Church teaching that same-sex “marriage” is impossible, but adding:

This is not to denigrate committed love of people of the same sex. This too should be cherished and supported, which is why church leaders are slowly coming to support samesex civil unions. The God of love can be present in every true love.

Subsequently, while contributing to the 2013 Anglican report on human sexual ethics, Radcliffe argued that homosexuality was to be understood in light of Christ’s gift of Himself in the Eucharist. He stated that “not every marriage is fertile,” and that “surely it is in the kind and healing words that we offer each other that we all share in fertility of that most intimate moment.”

Expressing this stance, Radcliffe was one of the regular celebrants for the LGBT Masses held in London, the notorious “Soho Masses.”

He also advocates for the divorced and “remarried” to receive Holy Communion, particularly in light of Pope Francis’ controversial exhortation Amoris Laetitia.

Despite this, Pope Francis appointed Radcliffe as a consultor for the Pontifical Council for Justice and Peace in 2015.

Notoriously heterodox pro-LGBT group New Ways Ministry welcomed Radcliffe’s appointment to the Pontifical Council, praising his “support for LGBT issues, which has been evident since at least the 1990s.”

“Though Radcliffe may not support the full spectrum of LGBT equality, his past record indicates that he can be a force for the church institution to start taking the next steps toward a more just and humane approach to LGBT issues,” New Ways Ministry wrote.

Making the announcement today about Radcliffe’s key involvement in the Synod on Synodality, Hollerich stated, “I am not concerned that there are different opinions within the Church. It is absolutely normal. The synod is by nature non-divisive. We need to listen to each other to discern what God wants for his people. I am therefore confident that we can progress well together.”

Radcliffe will certainly feel at home in the workings of the Synod, given the process’ notable promotion of LGBT issues. This was reflected in the latest working document that will guide the Synod over the upcoming months, which called for more inclusion of the divorced and “remarried,” LGBT groups, and proposes a “female diaconate.”

In the past Radcliffe has talked about the Eucharistic nature of sodomy and recommended that laity watch the gay film Brokeback Mountain and read gay fictionhttps://t.co/XvSdk67eJ7 https://t.co/lkiwkNfn5V

Nor is Radcliffe’s involvement in the Synod a complete surprise, given that Vatican News published a video of the priest in August 2021 praising and welcoming the multiyear event. However, his duties at the Synod have been met with outrage by faithful Catholics online.