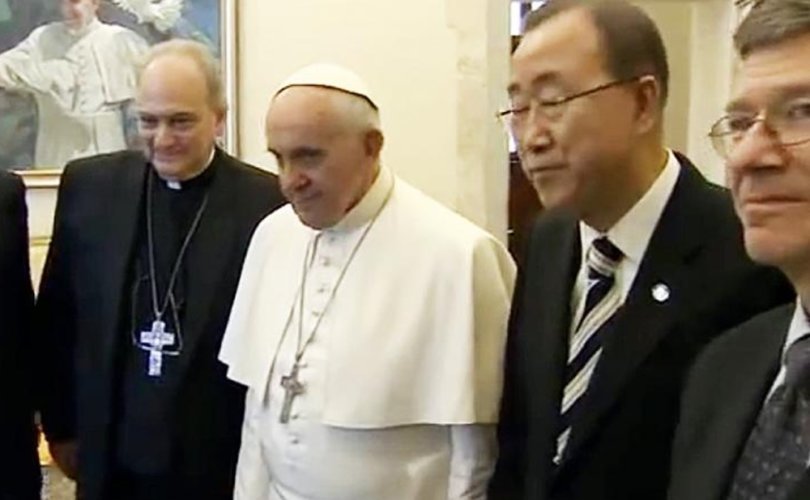 VATICAN CITY, September 23, 2019 (LifeSiteNews) ― Two famous names associated with both the United Nations and abortion are on the guest list for the upcoming Synod on the Amazon.

American economist Jeffrey Sachs, 64, and Korean former Secretary-General of the United Nations Ban Ki-moon, 75, are among the 185 people invited to the synod, which will take place in Rome between October 6 and 27.

A fan of abortion as a method of population control, Sachs has nevertheless has been invited to collaborate with the Vatican a number of times. In 2013, he delivered a keynote lecture for the Pontifical Academy of Sciences. In April 2015, he moderated and co-hosted a Vatican conference on climate change shortly before the release of Pope Francis’ encyclical on the environment, Laudato Si’, and gave a presentation at a Vatican conference on “children and sustainable development” that November. He was invited to a Vatican conference called  “Health of People, Health of Planet and Our Responsibility: Climate Change, Air Pollution and Health” in November 2017.

Ki-moon was the Secretary-General of the United Nations between January 2007 and December 2016. A diplomat by training, Ki-Moon used his position to campaign against climate change and made the Paris Agreement a legally binding treaty soon after its introduction.

The former UN chief was invited alongside Sachs to the Vatican’s April 2015 climate change conference, sparking a protest from the pro-life Voice of the Family, who stated that pro-life, pro-family lobbyists at the UN had seen how environmental issues had become an “umbrella” under which to attack human life and parental rights.

Patrick Buckley, the UN Envoy of the Society for the Protection of Unborn Children (SPUC), said at the time that the pro-abortion lobby “must be feeling very much empowered by the influence being exercised by two of the culture of death’s leading figures.”

Buckley underscored that Ki-Moon had promoted the “right to abortion” worldwide many times, and violated the UN consensus that the abortion issue should be left to individual nations when he criticized the lack of “safe abortion” in warzones.

The “Sustainable Development Goals,” which Sachs helped to draft, include a goal to “ensure universal sexual and reproductive health and rights,” a euphemism for legalization of abortion on demand and giving children access to birth control drugs and devices as well as abortion without parental knowledge.

Ki-moon was in Rome again in 2016 to meet with Pope Francis before the First Global Conference on Sport and Faith that October. The Secretary-General thanked the pontiff for his support of sustainable development to help the environment.

“For example, when world leaders adopted the 2030 Agenda for Sustainable Development, it was the Pope who urged and appealed to world leaders: He urged world leaders to have a stronger and visionary commitment for the world – people and planet – so that they can live in peace and prosperity through partnership,” Ki-moon said.

The synod guests also include Professor Hans J. Schellnhuber, who co-authored the Pontifical Academy of Science’s 2015 “Climate Change and the Common Good: A Statement of the Problem and the Demand for Transformative Solutions” with Jeffrey Sachs and Bishop Marcelo Sánchez Sorondo, 77, the Academy’s Argentine Chancellor.

The founder and director of the Potsdam Institute for Climate Impact Research (PIK), Schellnhuber advised Pope Francis when the pontiff wrote Laudato Si’.

Schellnhuber says he does not have a position on population control, but he is known for his advocacy of a one-world government. Schellnhuber has proposed that a “global democratic society” be organized within the framework of the United Nations in order to combat climate change.

As expected, all the bishops of the Amazon region have been invited to the synod, as have a number of influential German churchmen, including Cardinal Reinhard Marx; Fr. Pirmin Spiegel, the head of the German Bishops’ international aid group Misereor; and Fr. Miguel Heinz, the head of their Adventiat charity, which specifically subsidizes pastoral projects in Latin America.