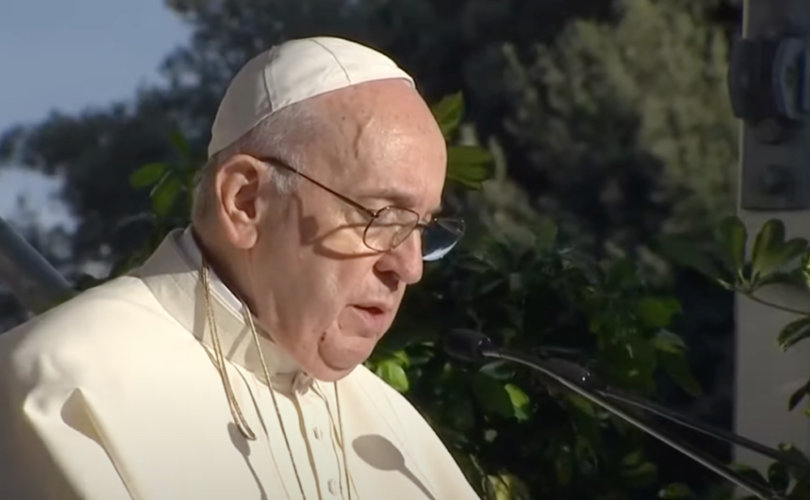 Pope Francis gives the closing address at the ecumenical meeting in Rome.YouTube

VATICAN CITY (LifeSiteNews) – Pope Francis joined with politicians, abortion promoters, and ecumenical leaders this week in Rome to promote “peace …fraternity … vaccines,” all “in the spirit” of the “idolatrous worship” of the 1986 Assisi meeting.

The 35th Meeting of Dialogue and Prayer for Peace, entitled “Peoples as Brothers, Future Earth” and held by the Community of Sant’Egidio “in the spirit” of the inter-religious 1986 meeting in Assisi, took place October 6-7 in Rome.

The meeting was described by the Lepanto Institute’s Michael Hichborn, as “another form of idolatry in the form of a human brotherhood without Christ.”

Attended by Moslems, Jews, Protestants, pro-aborts and the Pope

Archbishop Justin Welby gave an excellent speech at a Conference organized by the Sant’Egidio Community gathering together Religious leaders of the world. pic.twitter.com/l8UhfpyPiv

The symbol for the 2021 event featured a swirling, LGBT-colored flag topped with a white dove.

The event was modeled on the “scandalous” interreligious 1986 Assisi meeting at which Pope John Paul II prayed together with Orthodox Christians, Protestants, Jews, Muslims, Hindus, Buddhists and representatives of many other religions. John Paul II addressed the representatives of the different religions with the words: “Religions are many and varied, and they reflect the desire of men and women down through the ages to enter into a relationship with the Absolute Being.”

Speaking to Gloria.tv last year, Bishop Athanasius Schneider stated that the 1986 Assisi meeting was a “preparation” for the worship of the Pachamama statues in the Vatican Gardens, as it accustomed Catholics to the “erroneous teaching … that all religions are on the same level.”

In announcing the 2021 event, Marco Impagliazzo, the president of the Community of Sant’Egidio, hailed the current meeting as a sign that “the vaccine campaign is giving new possibilities to many peoples and many nations.”

“We expect many fruits from this meeting,” he said, praising the Pope’s ecumenical commitment to the “environmental crisis,” since “time is about to run out.”

The two themes of the conference are familiar to followers of Vatican-based news, being “Universal Fraternity and Future Earth, Care for the Environment.”

“In Rome, religions have the task of showing that we on these two themes we can walk together, beginning with the diversity that is inherent in each religion, if we want to save the world and if we want to work for a world that is very different from the one that the pandemic has given us or into which we have entered because of the pandemic,” Impagliazzo stated.

The closing ceremony, which took place in the Colosseum, featured Pope Francis, Angela Merkel, the Grand Imam, and Rabbi Goldschmidt. On the 450th anniversary of the Battle of Lepanto, marking the Catholic victory over the Moslem fleet, the Pope prayed alongside leaders from Christianity, Islam, Hebraism, Buddhism, Tenrikyo, Hinduism, and Sikhism.

Addressing the participants, the Pope referenced his controversial document Fratelli Tutti as well as his 2019 Abu Dhabi document in his call for “peace” and earthly “fraternity.”

That peace, the Pope declared, “grows in fraternity” and is “linked to another dream, that of the future earth.”

“This is a commitment to care for creation, for the common home that we will leave to the young who will come after us,” attested the Pope. “By cultivating a contemplative and non-predatory approach, the religions are called to listen to the groans of mother earth, which suffers violence.”

Similar words were made by the Grand Imam of Al-Azhar, who praised Pope Francis as “a man of peace and humanity par excellence,” welcoming their now extensive collaboration.” Highlighting the importance of the Abu Dhabi document, which has been described as seeming to “overturn the doctrine of the Gospel,” the Grand Imam described it as “an appeal to apply the moral principles of religions to create a true fraternity where there is no room for discrimination on the basis of differences of religion, confession, race, gender, or other forms of intolerance.”

Speaking to LifeSiteNews the day after the document was promulgated in 2019, a Dominican theologian explained that the problematic passage on the Divine willing of different religions “in its obvious sense is false, and in fact heretical.”

Meanwhile, Merkel spoke of the state’s obligation to protect “human dignity,” on the day that a German court ruled the harsh impositions of the Bavarian state government to lock down and forbid citizens from leaving home in April 2020 were illegal and unnecessary.

Declaring that Germany had “learned a lesson from its past,” Merkel called for “an open and respectful dialogue between governments and religions” to face the “consequences of climate change and their containment.”

The meeting closed with a reading of the joint “Appeal for peace,” declaring that “the name of God is peace.”

LifeSiteNews spoke with Michael Hichborn, founder and president of the Lepanto Institute, who noted how the meeting came two years after the infamous Pachamama event in the Vatican.

“Two years ago this month, Pope Francis participated in an act of idolatry, whereby the statue of a pagan deity of the earth was venerated in the Vatican Gardens, processed to the Vatican Synod Hall, and enthroned on the very altar of St. Peter’s,” Hichborn told LifeSiteNews.

“And now, the pope is practicing another form of idolatry in the form of a human brotherhood without Christ,” declared Hichborn.

“Men of faith seek Christ to save them from the evils of the world, while men of no faith try to bargain with the world to ease their suffering. While these men seek human solutions to what they believe to be man-made climate change, it would do them good to remember that the thermostat is fixed in Hell.”