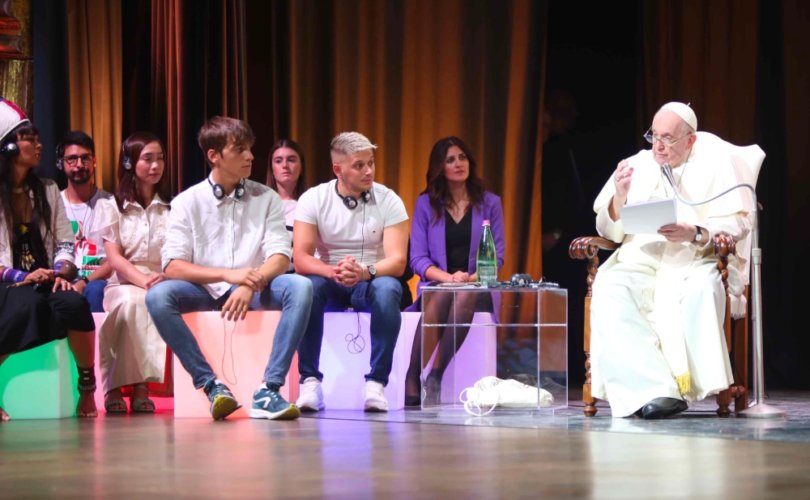 Taking place September 22 through 24 in Assisi, “The Economy of Francesco” (EoF) conference is now in its third year, with this event being the first to be held in-person.

Vatican News reports that over 1,000 “young economists and entrepreneurs” from over 120 countries have gathered in Assisi where they have been examining how to give “a new soul to the economy.” They also looked at issues such “as climate change, the energy emergency.”

Though held in Assisi, the home of St. Francis, the conference fails to mention religion in its promotional materials, and instead focuses on an irreligious style of economical and global assessment.

The climax of the event was Pope Francis’ visit and address to the participants on September 24, along with the signing of the EoF “pact.” That document, which Francis joined in signing, made no mention of Christianity apart from referring to “an economy of the Gospel.”

Outlining their shared dreams for this new economical goal, the signatories appeared to suggest that it could create a perfect world. They wrote that their goal “is not a utopia,” precisely “because we are already building it.”

“And some of us, on particularly bright mornings, have already glimpsed the beginning of the promised land,” the document concluded.

Addressing the assembled youth, Francis said that the older generation had “failed to guard the planet and we are not guarding peace.”

The key theme underpinning the entire event was not religion, but attention to the climate, as repeatedly promoted by Francis. Calling them to build a new economy, Francis said it “must be an earth-friendly economy, and an economy of peace,” one centered upon “an ecological conversion.”

“We humans, in these last two centuries, have grown at the expense of the earth,” said Francis. “It has been she who has paid the bill!”

“The pollution that kills is not only carbon dioxide pollution; inequality also mortally pollutes our planet.”

The Pontiff closed with an ecological prayer, which opened with the words:

“Father, we ask your forgiveness for severely wounding the earth, for failing to respect indigenous cultures, for failing to esteem and love the poorest, for creating wealth without communion.”

As part of the conference’s opening “plenary session,” the ardent population control activist and friend of Pope Francis Jeffrey Sachs was due to join as one of the EoF “ambassadors.” The official program lists him as present, but he did not join the stage alongside the other ambassadors on Thursday evening. Instead he joined online, with EoF telling LifeSite that Sachs was “connected” to the conference.

Sachs has been an ardent supporter of Francis’ EoF movement since its inception, addressing the first event – a virtual conference – in 2020, and again participating in the 2021 conference.

Earlier this year, he wrote about the movement, calling it a “remarkable initiative.” Sachs praised the “modern Catholic social teachings” for creating an economical style which argued for an economy which “should benefit all people.” High among the priorities Sachs identified were the “poor” and the “earth.”

In October last year, Francis appointed Sachs as an ordinary member of the Pontifical Academy of Social Sciences for a 10-year period, with the Vatican calling him a “distinguished” professor while highlighting his work in “sustainable development” but avoiding any mention of his support for abortion.

As LifeSite has noted, Sachs has been a regular figure at the Vatican during Pope Francis’s pontificate, including for key events such as the 2019 Amazon Synod, a 2019 Vatican youth conference based on the SDGs, a 2020 online conference on “a new world economy,” and the Pope’s 2020 launch of his partnership with the U.N. for education.

His outlook was described by Bishop Marcelo Sánchez Sorondo, the chancellor of the Pontifical Academy of Social Sciences, as integrating “the magisterium of the Church and of Pope Francis into economics by putting the human person and the common good at the center.”