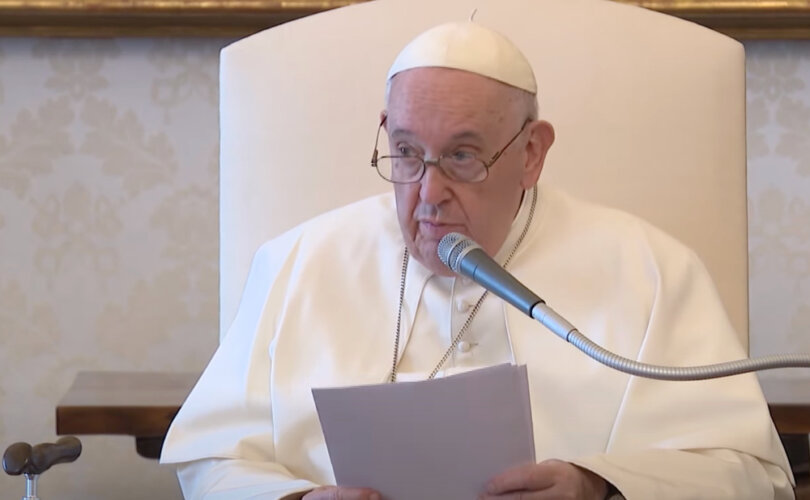 VATICAN CITY (LifeSiteNews) — Pope Francis accused humanity of being behind the “present environmental crisis” in a meeting with a Cambodian Buddhist delegation this morning.

The striking comments were made today by Francis in a meeting he had with Buddhist monks as part of the current Christian Unity week series of events.

The delegation of Buddhist monks from Cambodia were received by Pope Francis in private audience this morning, joined also by Cambodian officials and Bishop Olivier Schmitthaeusler, the Apostolic Vicar of Phnom Penh.

In the meeting – held shortly after the Pope met with an ecumenical group from Finland – Francis praised the visit as a means to “consolidate your enduring friendship as religious leaders working to enhance interreligious cooperation.”

He thanked the Buddhist delegation for having chosen “Ecological Conversion” as the theme for their meeting.

#PopeFrancis met with #Buddhist monks today, & spoke at length on “ecological conversion” which “happens when the human roots of the present environmental crisis are named” & when “true repentance” stops “ideologies & practices that are hurtful and disrespectful to the earth.” pic.twitter.com/4eY78SWDxa

Such a step, Francis said, demonstrated a “positive sign of the growing sensitivity and concern for the well-being of the earth, our common home, and for the important contributions that, inspired by your religious beliefs and spiritual traditions, you can offer to your noble country on its path to social healing and economic reconstruction following the socio-political crises of recent decades.”

The Pontiff equated respect for the “family” with respect for “nature,” stating that there is an “urgent need … to seek integrated solutions anchored in respect for the fundamental interdependence of the human family and nature.”

Referencing his own, regularly repeated statements calling for “ecological conversion,” the Pope outlined the instances in which he claimed such a “conversion” occurred – linking it to an acknowledgement of the “human roots of the present environmental crisis.”

Ecological conversion happens when the human roots of the present environmental crisis are named; when true repentance leads to the slowing or halting of trends, ideologies and practices that are hurtful and disrespectful to the earth and when people commit to promoting models of developments that heal wounds inflicted by greed, excessive search for financial profits, lack of solidarity with neighbours and disrespect for the environment.

Francis has regularly used the term “ecological conversion,” but rarely explained what he means by it. Today, however – quoting from his own Laudato si – he proffered his understanding of the phrase, stating that it happened when individuals turn “what is happening to the world into our own personal suffering and thus to discover what each of us can do about it.”

The Pope continued by quoting from Buddhist texts, promoting the Buddhist style of living called “metta,” as well as the “tenets that the Buddha left as a legacy to his disciples (Pratimoksa).”

He also encouraged the Buddhist group in their upcoming meetings with the Vatican’s Dicastery for Interreligious Dialogue, so that such meetings would “explore further ways to promote ecological conversion through the initiatives undertaken by Buddhist-Christian dialogue both in Cambodia and in the whole region.”

Such remarks echo those Francis has made on many occasions. In September, Pope Francis joined population control activist Jeffrey Sachs in the Pope’s youth initiative the “Economy of Francesco” and delivered an address that also accused the population of growing at expense of planet. “We humans, in these last two centuries, have grown at the expense of the earth,” Francis said. “It has been she who has paid the bill!”

The pollution that kills is not only carbon dioxide pollution; inequality also mortally pollutes our planet.

The Pontiff closed with an ecological prayer that opened with the words:

Father, we ask your forgiveness for severely wounding the earth, for failing to respect indigenous cultures, for failing to esteem and love the poorest, for creating wealth without communion.

The phrase “ecological conversion” has been described by Cardinal Raymond Burke as “an argument for a one-world government” marked by an “insidious” idolatry and a “masonic” concept of a “completely secularized people who no longer recognize that the governance of the world is in the hands of God, Who entrusts it to individual governments, nations, and groupings of people according to nature itself.”

“With regard to ‘ecological conversion,’ what I see behind this is a push for worship of ‘Mother Earth,’” Cardinal Burke said in a wide-ranging interview with The Wanderer published December 2020.

Indeed, after Francis’ address to the Buddhist group today, numerous Catholics on Twitter slated the Pontiff. “We need a Catholic Pope not a wannabe 1970’s hippy,” one wrote. “How much longer do we have to deal with this heresy,” another wrote.

Yet Francis’ remarks are in line with the Vatican’s current de facto policy on issues of “climate change.” The Vatican made a surprise announcement on July 8, declaring that it had formally joined the United Nations Framework Convention on Climate Change (UNFCCC) and the Paris Climate Agreement, having delivered the required documentation to the United Nations on June 6. The documents entered into force on October 4, a day that was celebrated by the Vatican.

As already extensively reported by LifeSite, the pro-abortion Paris Agreement connects to the stated U.N. goal of creating a universal right to abortion in line with Goal #5.6 of the UN’s Sustainable Development Goals.